This week, our adventurous hosts tackle one of the most requested topics, managing Office in virtualized environments from the entire desktop to hosting the application on Remote Desktop Server with Office 365. They explain virtualization options, licensing implications and even demonstrate how to convert Click-to-Run media into an App-V package. Lead deployment engineer Jefferson Criddle also joins again to discuss how application virtualization is at the core of the Click-to-Run based Office 365 ProPlus.

Add an ICS reminder to your calendar to tune in each Wednesday 9am PST. We redirect the www.microsoft.com/garage link each week to go to the latest episode.

Jeremy: Last week we went deeper on the identity and user provisioning aspects of Office 365 ProPlus and demonstrated the primary options for provisioning user accounts and services to users. We also showed these tasks can be automated using PowerShell cmdlets.

Yoni: The user provisioning aspects are definitely some of the most visible changes to how Office is consumed with Office 365 ProPlus. There are also a lot of changes in terms of desktop virtualization and which Office packages can be used in each scenario.

Yoni: This is great news for people out there using virtualization to deliver either entire desktops or Office apps with technologies like RemoteApp in Windows Server or tools like Citrix XenApp. As we have been mentioning throughout the series and as Jefferson Criddle mentions on today's show, Click-to-Run is based on the same technology underpinnings found in Microsoft Application Virtualization.

Jeremy: We drew a lot of this out on the display in the show, but to provide a little more clarity, I decided to create a few graphics with a little more detail. The first virtualization technology we discussed was App-V and I've documented the attributes it shares with Click-to-Run below and some of the unique aspects for App-V and Click-to-Run. 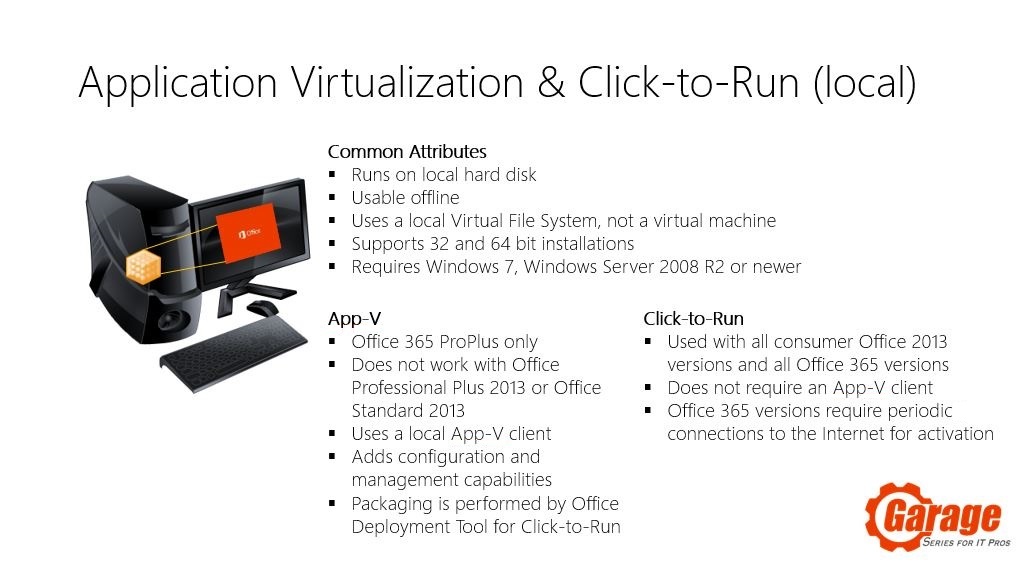 Yoni: Then we talked about Remote Desktop Services (RDS), but we didn't mention in the show that you can connect to a single PC or "session" using a remote device. Windows has had this built in for years and products like GoToMyPC from Citrix extend that capability to other device platforms. That means if you cannot make it to your desk at work, you can remote into it and use Office installed on that remote PC. We labeled the Remote Desktop Connection screen in Windows as a Connection Broker, but in most VDI cases you'll be using something else to login and broker the connection. 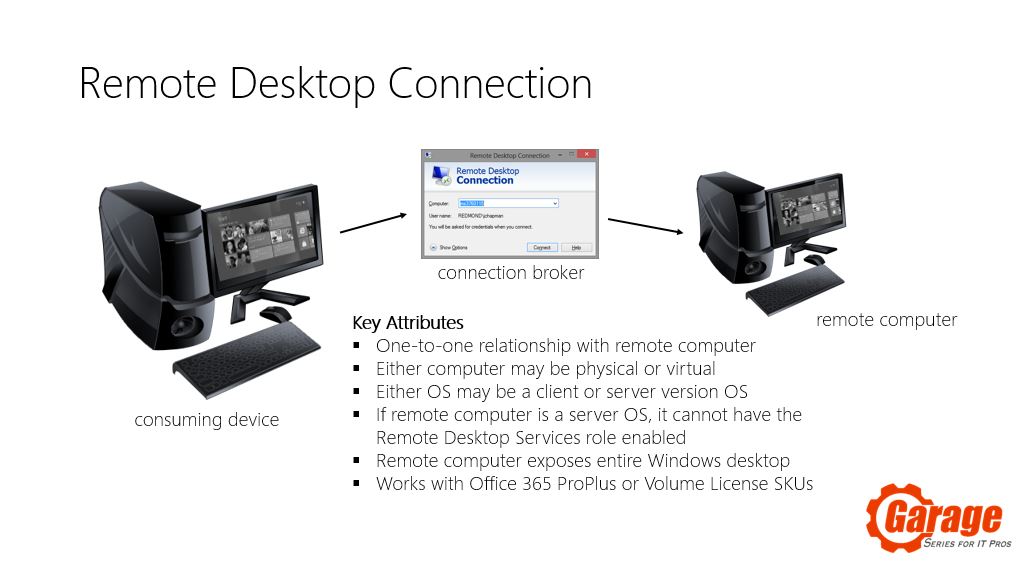 Jeremy: RDS is what we used to call Terminal Services 5+ years ago. That is when multiple users log into a single Windows Server operating system simultaneously with multiple user profiles. There is basically one install of Office serving sometimes 50-to-100 people simultaneously. Based on how that works and how Office activation works, you need to use Volume Licensing activation with Office Professional Plus 2013, as Office 365 ProPlus will not install or run on a server with the RDS role enabled.

Yoni: It makes sense because if one user were to install and activate Office and 100 of his colleagues used the first user's install, they would need rights somehow to the software. You're effectively running a Volume Licensing (VL) architecture in that case, so you need VL bits. One important note here is that App-V 5.0 can only be used with converted Click-to-Run packages using the Office Deployment Tool's /packager command. So because there are no VL builds of Click-to-Run, App-V 5.0 cannot be used to deliver new Office clients in an RDS environment. 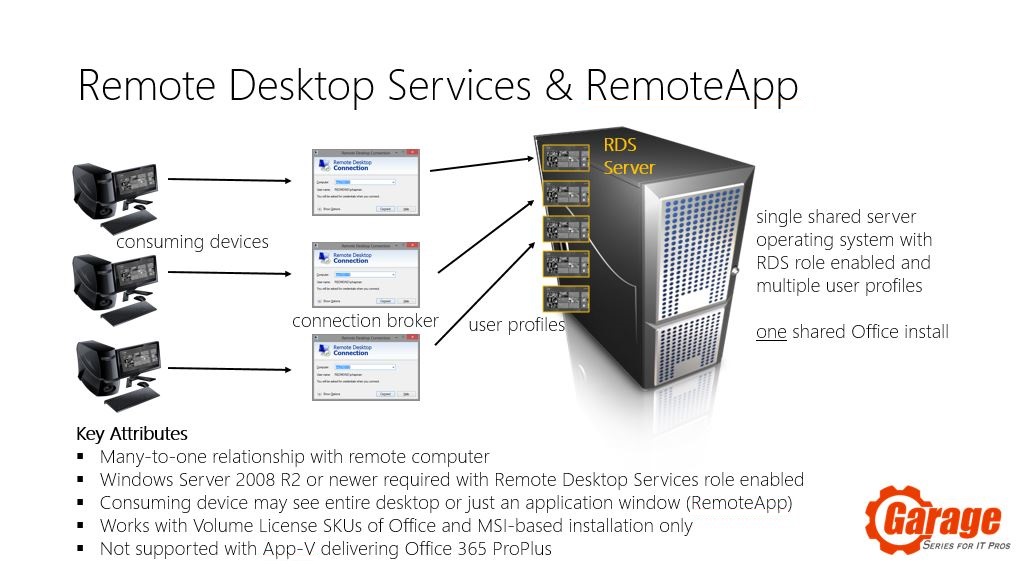 Jeremy: The most common virtualization architecture supporting both installation types of Office is Virtual Desktop Infrastructure (VDI) with virtual machines dedicated to users. This is a typical configuration used with off shore development where the user logs into the same virtual machine with each and every login. As long as that VM is static to the user, runs Windows 7/Server 2008 R2 and connects periodically to the Internet, it can run Office 365 ProPlus and the same is true for Office Professional Plus 2013 with the Windows Installer Package (MSI) based installation. The graphic below explains it with a bit more depth. 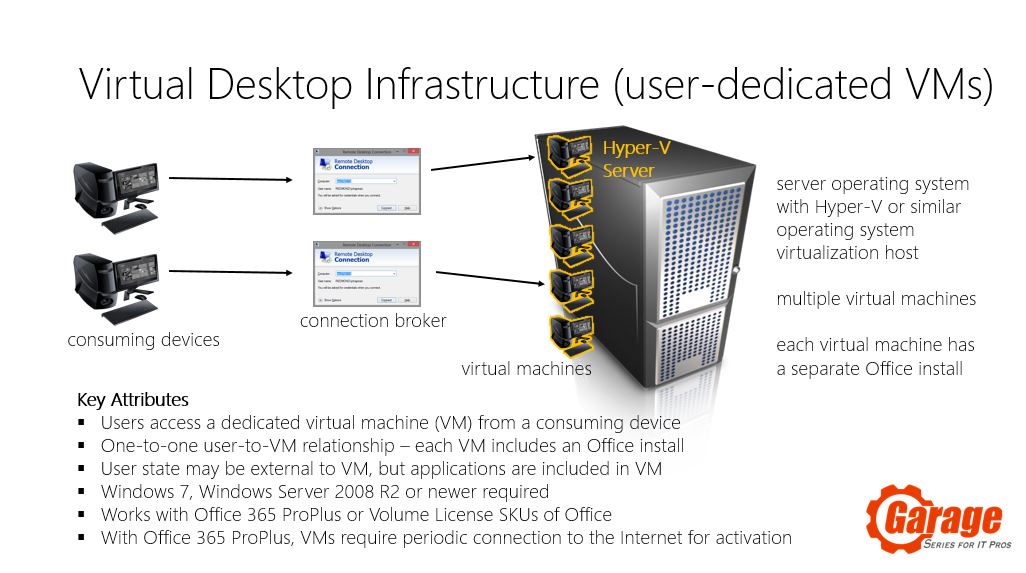 Yoni: All architectures using pooled VDI will need to use a VL package of Office with the MSI-based installer. These architectures can be used to maximize server resource utilization in VDI while providing a common base OS layer to ease management. 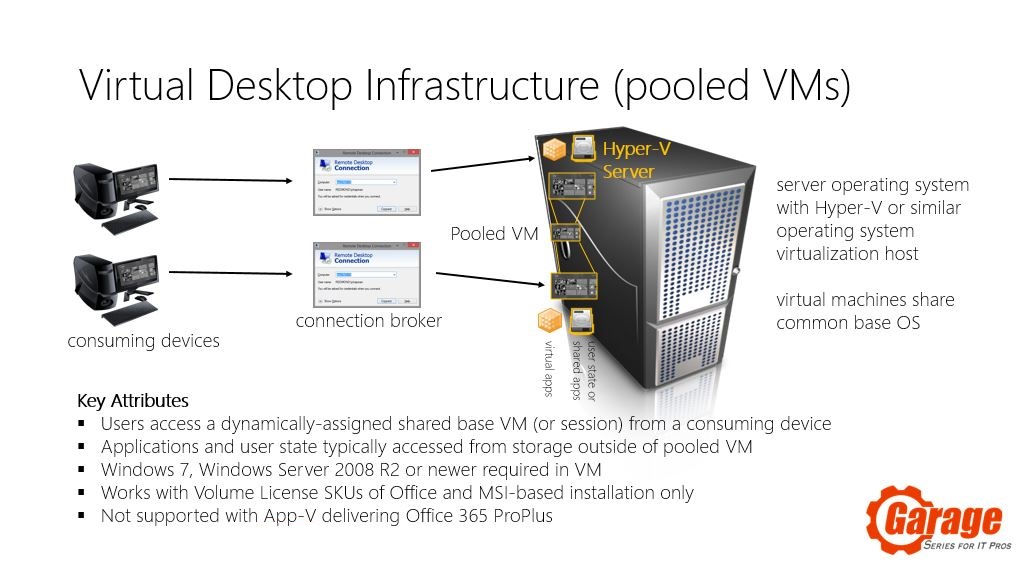 Jeremy: That was a crash course in only a few of the desktop virtualization architectures and permutations I've seen, but there are many more and several combinations between the types listed out above. It really scratches the surface and these are some of the most frequent questions we get, so I hope this helps.

With this show we also wrap the topics related to Office desktop apps in terms of what’s new, different and your specific options. Over the past few weeks we’ve covered all things Client related from the differences between the Office Professional Plus 2013 MSI-based install and the Office 365 Professional Plus Click-to-Run install, to configuring the new Office, automating user provisioning in Office 365, integrating with deployment tools and much more.

Don’t forget to tune in next week when we round up some of our favorite moments of the season, ahead of our series specials from Microsoft TechEd in New Orleans where we will extend our focus across the Office stack with more action packed weekly shows.

Yoni: Cool and exciting stuff ahead. I’d love to join in on the action in New Orleans, but I’ll have my hands full at home with the latest arrival to the Kirsh clan, my newborn daughter, Charlotte.

Jeremy: Congrats and we’ll miss you in New Orleans, Yoni. There’s lot’s to share too from the latest on touch and immersive experiences, the evolution of richer Office experiences on the Web and real-time co-authoring, the next frontier in sharing and collaboration including enterprise social, site mailbox and Lync as well as the latest advancements in enterprise search and data protection with capabilities such as eDiscovery in SharePoint and Data Loss Prevention in Microsoft Exchange and much more as we put the new Office through its paces in some extreme Louisiana based situations (hint: alligators) and also hear from tech analyst, author and journalist Paul Thurrott again as we look at his favorite things with Office 2013. So bye for now.

See you next week,

Overview of Licensing and Activation in Office 365 ProPlus

Garage Series for IT Pros Archive of previous episodes

About the Garage Series hosts:

By day, Jeremy Chapman works at Microsoft, responsible for optimizing the future of Office client and service delivery as the senior deployment lead. Jeremy’s background in application compatibility, building deployment automation tools and infrastructure reference architectures has been fundamental to the prioritization of new Office enterprise features such as the latest Click-to-Run install. By night, he is a car modding fanatic and serial linguist. He first met Yoni Kirsh, founder of the Australian-based deployment services company Fastrack Technology, back in 2007 at a Microsoft customer desktop advisory council. Yoni's real-world experience managing some of the largest Client deployments for the Asia Pacific region has helped steer the direction of the new Office. Additionally, Yoni is an aviation enthusiast and pilot. Both Jeremy and Yoni are respected technical speakers and between them have over 20 years of experience in the deployment and management of Microsoft Office and Windows clients. They are also leading experts in the transition to Office as a service.