Who moved my Garage?

Season 2 of the Garage series with host Jeremy Chapman is now on the new Office 365 Technology blog .

Looking for the latest new Office Garage Series post?  The scope of the show has expanded for season 2.  And with that, you can now find the show on the new Office 365 Technology blog.  As always, you can go to https://www.microsoft.com/garage to view the latest episode.

Season 2 of the Garage series kicks off with an episode covering the enhancements around touch and immersive experiences.   If you missed TechEd 2013 North America in New Orleans, or even if you didn't,  you'll want to check out the 6 part series that was filmed on location in New Orleans.

You won’t want to miss this week’s show. Jeremy is joined by Amanda Lefebvre as they give a pre-release, first look at upcoming Office experiences in the Web. They walk through real-time co-authoring beyond pure text editing across Word, PowerPoint and at a cell level in Excel. And they show net new capabilities previously only available on the desktop. Our hosts also challenge a local New Orleans band, Remedy Krewe, to compose a blues song real-time as they work together both online and offline. 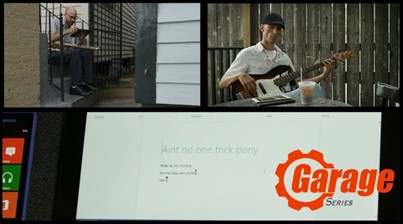 If you miss the good old days of Yoni and Jeremy co-hosting and talking about specifically about deployment and manageability of the new Office, check out the Garage Series for IT Pros Archive of previous episodes.