This is a quick one to check to ensure your TCP packets are able to contain the maximum amount of data possible, low values in this area will severely affect network performance.

Maximum Segment size or MSS is a TCP level value which is the largest segment which can be sent on the link minus the headers. To obtain this value take the IP level Maximum Transmission Unit (MTU) and subtract the IP and TCP header size.

So for a standard Ethernet connection with minimum size IP and TCP headers we subtract 40 bytes from the 1500 byte standard packet size (minus the Ethernet Header) leaving us with an MSS of 1460 bytes for data transmission.

So to get the most efficient use of a standard Ethernet connection we want to see an MSS of 1460 bytes being used on our TCP sessions.

This setting is agreed in the TCP 3-way handshake when a TCP session is set up. Both sides send an MSS value and the lower of the two is used for the connection.

It's easy to check this, take a Netmon or Wireshark trace and find the connection you're interested in, Netmon will filter the connections by process on the left hand side for you.

Once you've found the connection (ensuring you've started tracing before initiating the connection) then you just need to open the first to frames of the connection, the SYN & SYN ACK. Indicated by an S followed by an A..S in the description of the frame. To capture the 3-way handshake make sure you start tracing, then start Outlook, or connect to your SharePoint site in a new Browser window.

Once you've clicked on the first packet, the SYN, then in the frame details down on the bottom, open up TCP Options and the MSS can be clearly seen.

Here we see the MaxSegmentSize shown as 1460. 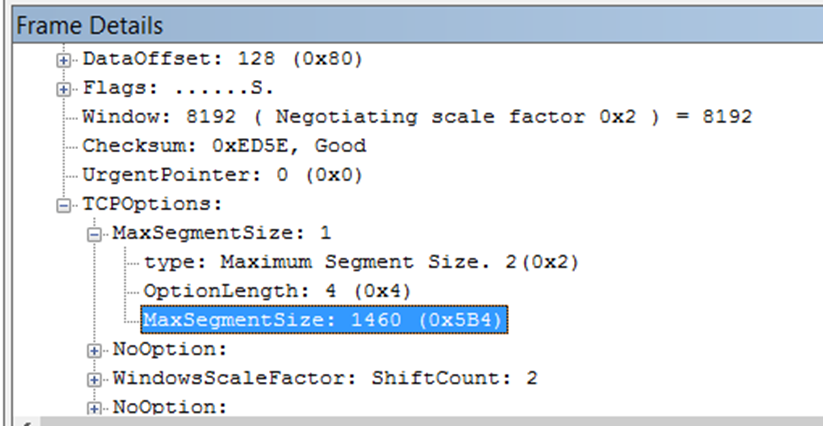 Repeat this with the SYN ACK which should be the second frame if you've filtered the connection away from other traffic. The lower of the two values will be your MSS. If it's 1460 then you're configured to use a full sized data payload.

One caveat to this, it doesn't mean that this value can actually be used, it's possible a network segment along the route has a lower MTU than we're aware of. If this is the case, if all is well we'll get an ICMP message back from the router at the edge of this link when we send a 1460 byte packet with the do not fragment bit set. This packet will tell us what the MTU is on the link and we'll adjust accordingly. However it's always worth checking this value is set to a high value and we can see the TCP payload throughout the trace is at 1460 (on full packets) and hasn't dropped down to a lower value.

It's common to see this value lower than the maximum of 1460 (for an Ethernet network), if for example we know a network segment along the route has a lower MTU, one with an encryption overhead for example, but the value shouldn't be significantly lower. 576 Byte packets are a sure sign we've hit problems and dropped down to the minimum packet size so keep an eye out for those.

Also, remember, if you're using a proxy, you'll have to check this both on the client, and a trace on the proxy or NAT device if used as there will be two distinct TCP sessions in use and you won't see the problem if it is beyond the proxy/NAT unless you trace there for that second TCP connection.

It's rare to see an issue with this, but it's always worth a quick check to ensure it's working as expected.