Hello readers! In this blog post I will be introducing PowerShell Desired State Configuration (hereafter called DSC). I will explain what it is and how you can use it so that it can serve as a primer for upcoming posts on DSC. You can expect more blog posts coming out on how to integrate DSC for example with the Windows Azure Pack and Service Management Automation.

DSC is a PowerShell extension and ships with Windows Server 2012 R2 and Windows 8.1. A couple of examples what DSC enables you to do are:

How does DSC work?

The following section describes the DSC flow, phases and the two different models: Push and Pull. In the illustration below both models are shown. 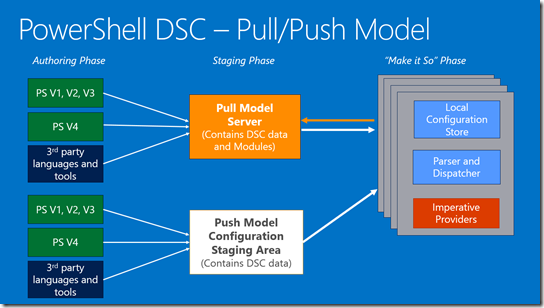 Let’s dive into the different phases.

In this phase the DSC configuration is created through PowerShell or by third party languages and tools. The output from the Authoring Phase is one or more MOF (Management Object Format) files, the format which is consumable by DSC. MOF files can be created in multiple ways. You could use Notepad.exe if you wanted to. Using PowerShell v4 adds declarative syntax extensions and IntelliSense for making it easier to create a MOF file. It handles schema validations as well. The section below called “Creating a DSC configuration” will explain further how to create a DSC configuration.

“Make it So” Phase

The final phase is to apply (enact) the configuration, to “make it so” as Jean-Luc Picard would say. DSC data is either pulled or pushed to the “Local Configuration Store” and contains the current, previous and the desired (DSC) state configuration. The configuration then gets parsed and the relevant (WMI) provider implements the change and “makes it so”.

DSC comes with 12 out of the box providers. These providers enable you to configure roles and features, copy files, creating a registry entry, managing services, creating local users and groups, etc.  See https://technet.microsoft.com/en-us/library/dn249921.aspx for a full listing. You can also create your own custom provider. How to do that can be found here:  https://technet.microsoft.com/en-us/library/dn249927.aspx

For a DSC configuration to be consumed, you need to declare it first. DSC consumes MOF (Management Object Format) files, a DMTF standard, which can actually be created with any text editor. PowerShell v4 makes it easier to create a MOF file by adding declarative syntax extensions and IntelliSense. It handles schema validations as well. The PowerShell v4 DSC extension adds a new keyword called “Configuration”. With this keyword, which is actually a “function”, you define a DSC configuration like in the example below:

Now you can go ahead and extend your configuration by adding for example “roles and features”:

Now that you have declared your DSC configuration you can create a DSC consumable MOF file by calling the function just as you would call any PowerShell function:

This will create a folder with the same name as your configuration name and will contain our MOF output file.

Now that we have a MOF file which can be consumed by DSC, we can apply it by using the “Start-DscConfiguration” cmdlet:

The “Path” parameter (the path where your MOF file is stored) can be a UNC or a local path.

How to detect configuration drift

If you want to compare the current and the actual configuration, you can use the cmdlet “Test-DscConfiguration” in the following way:

This will either return a “True” (when the current and actual configuration match) or “False” (if there’s a mismatch).

Why is DSC so cool?

I hope you found this explanation useful and would encourage you to start testing it. As always we appreciate your feedback and suggestions for content.

Until next time where we will take DSC to the next level!