In SQL Server 2012 SP3, we made supportability improvements in the memory grant space. One of the features (https://support.microsoft.com/en-us/kb/3107401)  is allow you to hint your query (MIN_GRANT_PERCENT and MAX_GRANT_PERCENT), giving you much more granular control. There are additional columns related memory grants in sys.dm_exec_query_stats (https://support.microsoft.com/en-us/kb/3107398) and query_memory_grant_usage extended events to help troubleshoot memory grant issues.

Recently, we had a customer who reported performance issues.  The issue itself on surface is not related to memory grant.  Rather, the wait is on RESOURCE_SEMAPHORE_QUERY_COMPILE.

From SQL Nexus bottleneck report, you can see the waits. 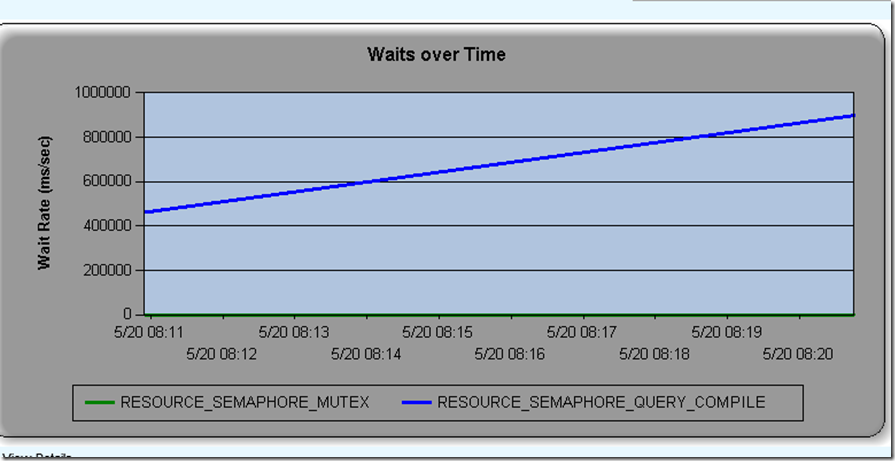 The customer has lots of waits on RESOURCE_SEMAPHORE_QUERY_COMPILE.  To troubleshoot this, we have to look from two angles.  First, did customer have many queries needing large amount of compile memory?  Secondly, was it possible that other components used too much memory, causing the threshold lowered?  In other words, if SQL Server had enough memory, those queries requiring same amount of compile memory would not have been put to wait.

We used this query and captured for several iterations of data to confirm that server didn’t have queries that required large amount of compile memory per se.

However, we saw huge memory grants (note about 190GB) at the time of the issue from perfmon. 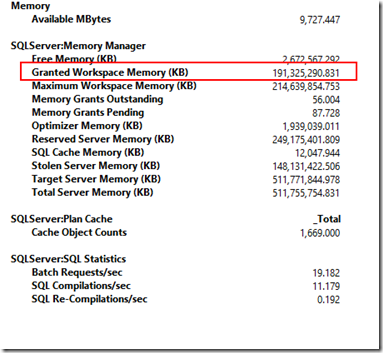 We used this query to find out queries needing large memory grant.

We were able to find out the queries using large memory grants with the new columns in DMV sys.dm_exec_query_stats.  But customer said that they didn’t have a good solution.  He had tried to use resource governor.  But that ended up throttling everyone in the pool.  He only wanted to throttle a few queries that were run frequently.

Since they were on SQL 2012 SP3 build, we recommended MAX_GRANT_PERCENT per  https://support.microsoft.com/en-us/kb/3107401. He used 3% and things have worked out perfectly for him.

Customer’s verbatim “We implemented the hint “max_grant_percent” on the business object queries that were taking the most memory and that seems to have really help. We set the percentage to 3 and now we are not seeing the resources semaphore query complies waits.”

Next time when you have memory grant issue, these query hints may come handy.  By the way, these features are in SQL 2016 RTM and will be in SQL Server 2014 service pack release.