WTF#: Are we going to start using F# for Engineering or is it just turning into another committee language 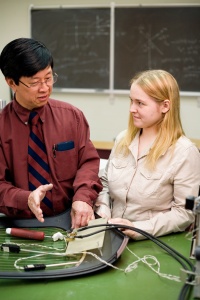 Let put this out there: Where are the examples of F# doing Engineering work, there are examples of F# doing some awesome work on the Live Mail server, and examples of how you would program a science or engineering solution.  But I can’t seem to find any interesting ones that are doing fluid dynamics, electrical circuit analysis, or similar.  Maybe I am missing something.

Ok, the F# Journal has an article on the Navier-Stokes theorem, how to program smoke, since I don’t want to pay for the subscription, I haven’t read it, but I did buy the F# for Scientists, and it is a good guide book, but doesn’t discuss solving real problems.  I am looking for a book similar to the C language books that discuss in depth Digital Signal Programming, and the like.

Right now, engineers that I have talked to would rather do their circuits, stress analysis, and so forth using MatLab, Mathematica, or Excel (hopefully tied into a HPC).

It is real handy that the Computer Scientists have a new toy, but isn’t it time that we start building real examples to attract engineers and scientists to the table?

That question is directed at me as well as the audience, I need to sit myself down and start generating some interesting control systems solutions that I did in FORTRAN many years ago in F#, and quit whining about the lack of examples that are useful for Engineers.

So here goes: Sam, set up a program to create interesting programs.

Glad I could that out in the open.  I need to develop a curriculum framework.  Here I will even place a number on the measurement i am going for by June, 5000 faculty will do one of the following:

So there, I have placed a stake in the ground.  Now I am going to have a couple of Martini’s to get started.

Also, I will have to connect the whole thing to the movie: Angels & Demons, and create a game that is called Galileo’s conspiracy ©

Oh, see my other blogs:

Finally a shout out to the CSUSM Imagine Cup team!