I ran into a problem a few weeks ago at a customer’s site. We were trying to install Configuration Manager 2012 SP1 on Server 2012. A requirement to use software updates with Configuration Manager is the need to install WSUS. I Installed WSUS via Server Manager with no problem, however when I tried to run the Post Deployment Configuration the task failed. The error pointed to a 1KB file in the %TEMP% directory. Upon investigation there was nothing in the file. I noticed the Tools folder was missing from the Update Services folders. I believe the post install task uses WSUSUtil to complete post installation configuration. If there is no WSUSUtil.exe in the Tools folder then the post install task will fail.

I found WSUSUtil by searching for it on my 2012 server. I copied WSUSUtil into my newly created Tools folder in the Update Services folder. 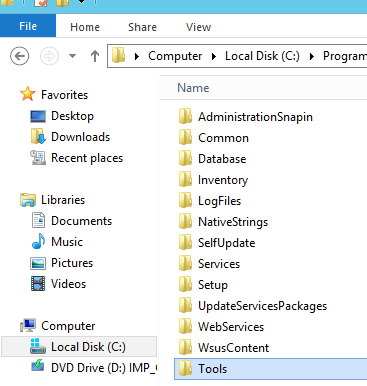 I tried running the Post Deployment Configuration after creating the tools folder, but it continued to fail. I opened PowerShell with administrative privileges and ran the below command.

After a few minutes the command completes and WSUS should be installed. You will not be able to run the Post-Deployment Configuration, however WSUS will be installed. My setup consisted of SQL and the content directory being stored locally. Slight modifications to the command line should accommodate your specific setup.

These steps should only be used to address the issue described above. Special thanks to the WSUS Team for providing insight into this problem.

After further troubleshooting with Alex of the WSUS team, we discovered an unintended result during the installation of WSUS. When using SQL for your database instance you must specify the name of your SQL server. One would assume if the database is local the wizard would find the instance without specifying the SQL server name. If you select Check Connection without specifying a server name it will return Successfully Connected to server. Despite this misleading result, it was not successful. The server name value it expects when running the Post Deployment step will be empty and will cause Post Deployment to fail. If you specify the SQL server name, then there is no need to run the PowerShell command above. You can simply run the Post Deployment step thru the GUI.

The absence of the Tools folder may still cause a failure, however there is a workaround above. The WSUS team is still working on why this is happening and will provide an update on their findings.