At the traditional annual “BI Power Hour” sessions, several teams that contribute to the Microsoft Business Intelligence platform show off their technology in a fun way.  It is about demonstrating, in perhaps unusual ways, of how business intelligence and various tools of the BI stack can be useful.

In past years, Reporting Services made a number of successful contributions to these events, such as Hangman, report manager as report, etch-a-sketch, mastermind, an executive dashboard (aka tic-tac-toe), and others.

Throughout last year, we showed several variations of a multi-player game that we shall call “Sea Battle”.  The goal of the game is to sink all of your opponent ships (for example, a Battleship), before the opponent has a chance to find and sink your ships.  The faster you click, the better your chances of winning :)

The overall theme of the report was about interesting new data visualization features in Reporting Services 2008.  It uses charts with dynamic drill through actions, as well as data point tooltips. 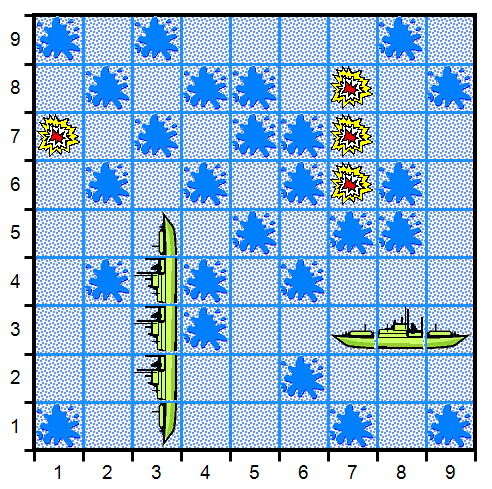 Furthermore, a small matrix acts essentially as a data-driven grid control next to the chart to show your own ship positions and the opponent’s hits and misses.  The overall health status of the opponent's ships is shown using a gauge control with a custom pointer with an image to simulate a rising water level, as a ship sustains more and more hits.

Successfully sinking a ship is rewarded with a nice animated explosion.  The really fun part is the multi-player aspect – we use a basic way of matching up two report users so they can play against each other by simply interacting with their report on a report server.

While Reporting Services was clearly not designed as a gaming platform, this demonstration of the product's flexibility brought out the competitive spirit in the SQL Server BI team.  When I made an initial version available for limited beta-testing on an internal report server, the news spread quickly and we immediately had more than 50 people playing, and frantically clicking on the chart’s drill through links trying to win against their human opponents.  This created quite a bit of load on the report server that is also used by hundreds of other users, and provided a nice stress test scenario :)

Enough said.  I know you want to participate in the fun and play yourself!

Instructions to setup the demo on your own RS 2008 report server:

Hope you are going to enjoy this Power Hour demo!