This post provides you with the method to load the Exchange Management Shell into ISE.

The ingredients we're using for this trick are:

And see this link about how to install Exchange Management Tools (from the Exchange setup files, use something like Setup.exe /Role:ManagementTools /IAcceptExchangeServerLicenseTerms)

Note that if you don't have / don't want to install the Exchange Management tools on your management server/desktop, you can also choose to import a remote Powershell session from an Exchange 2010/2013/2016 environment to bring in the Exchange Powershell commands, but there are some limitations also - there are less Exchange cmdlets (784 Exchange cmdlets brought by remoting PowerShell into an Exchange session, versus 963 Exchange cmdlets brought by the Exchange Management Shell - that's for Exchange 2013 just to give you an idea), and both methods have their pros and cons. This article is about opening the ISE PowerShell console and load the Exchange Cmdlets exactly like the Exchange Management Shell console shortcut (2010, 2013 and/or 2016), and not using Remote PSSessions - that is another topic which Technet cover quite clearly for Exchange 2010, 2013 and 2016 and I summarize these TechNet articles in a Blog Post as well, and you have as well my friend Rhoderick who describes this in one of his awesome posts specifically with ISE, many resources on this topic for all tastes.

What I find convenient with ISE is that you can use intellisense and color highlight when editing your Exchange PowerShell Management scripts, and also copy/paste color-coded Exchange instructions for your blogging or documentation purposes, which I did for my last posts.

Also, with Powershell ISE, you have an action pane that drills down all the cmdlets that are loaded with your current session – loading the Exchange Management Shell within ISE will also provide you all the available Exchange (2010, 2013, 2016) cmdlets available for Exchange management. Note that this "action pane" in ISE also loads all O365 and/or Azure cmdlets if you import a Powershell Session where you are connected to your O365/Azure tenant.

Type or paste the below directly on the command part of your ISE console and press "Enter" (or paste it on the script pane and then press "F5", which I did on the below screenshot) 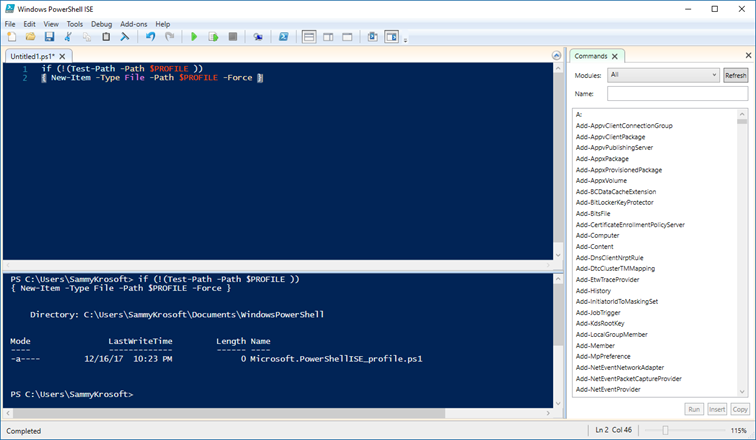 #2- Second, within your ISE console, type the following

Note 1: this will open your $profile (for ISE $profile is Microsoft.PowerShellISE_Profile.ps1 as you can notice in the script pane's title that just opened – again for more information about ISE profile, see this link) in the ISE script pane.

Note 2: this psEdit command is available in ISE only, not in the text-based PowerShell console.

#3- in the script pane, just copy/paste the below blue script

The below script goes a little further than just loading the Exchange Management Shell into ISE: 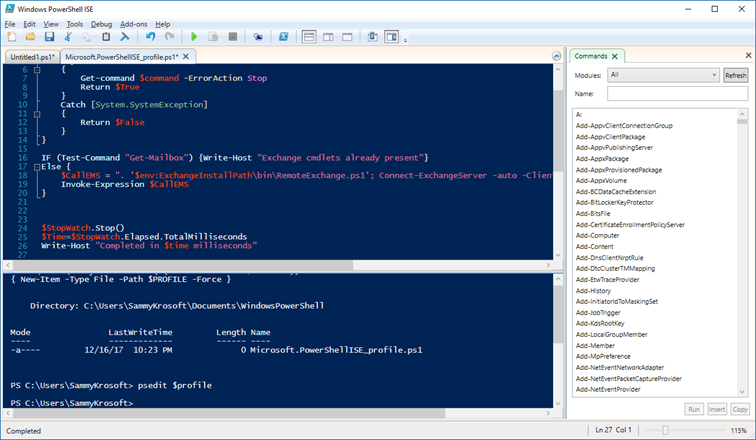 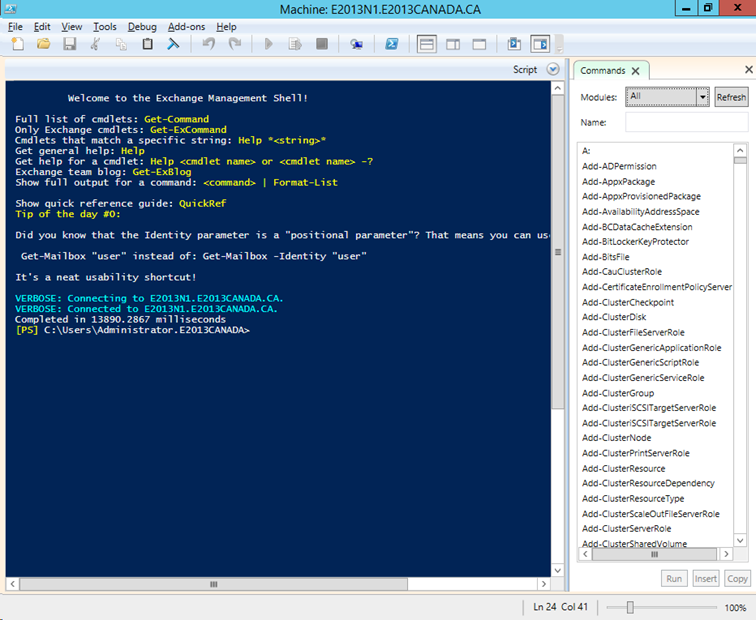