Ever had an SP2013 Index Component report a yellow exclamation point (

) to indicate a "degraded index component" and then wondered what that really meant? From my experience, these almost always either tied to an underlying disk problem and/or some external software interfering with the component (most commonly, AntiVirus or file-level backup utilities).

In this post, we'll specifically look at a failed Master Merge using Get-SRxIndexReports cmdlet introduced with our Search Health Reports (SRx) Core diagnostic tools, which can be downloaded from the TechNet Gallery here .

Note: the script I originally referenced in this post can still be downloaded, but has been deprecated by the SRx
the Get-SPIndexReports script introduced in my previous blog post here to highlight the warning signs… and then show new functionality extend the script to better accommodate this case.

The Background and Scenario

For this scenario, the deployment of the Search Service Application (SSA) entailed two Index partitions, each with two replicas – a configuration commonly called a 2-by-2. And to keep things simple, assume each of the four Index components each run on a separate server.

When the customer first engaged me for assistance, they were reporting the following symptoms:

As recommended in my previous post, we first started with the Get-SPSearchTopologyState.ps1 script (the original version here and my extended version here) to ensure a baseline level of health and to verify that no other underlying issues existed (and thus should be resolved first). In this case, the output was clean, so we proceeded to running the Get-SPIndexReports script (with the detailed flag).

In the first part of the output, we found the following, which provided a lot of clues (highlighting added for emphasis):

On the first two rows of this output, we see the two replicas for Partition 0 (cells [I.0.0] and [I.1.0]) where both have an Active state, reference a consistent Generation 473563, and report a similar CheckpointSize at ~170 GB.

Further in the report, we then find the actual size of the Index files on disk…

…which corresponds with the CheckpointSize listed earlier in the report and correlates with the behavior reported by the customer.

A Glimpse into the Mechanics for Managing the Index

In the Search System, the Journal is conceptually analogous to a DBMS transaction log in that it tracks the sequential history of all operations submitted to an index cell (e.g. adding or deleting items from the Index). A replica with a transient failure can use the Journal to re-play a set of operations and recover to a consistent state.

The Generation ID is conceptually analogous to the transaction log sequence number (LSN) in SQL Server. It is sequentially ordered such that Generation [N] refers to operations that occurred more recently than those associated with Generation [N-1] . Simplistically speaking, think of a Generation as a high water mark for content being submitted into the Index. The Search System has only one "open" Generation at any time, and the Search Admin component manages the starting/closing of a Generation.

During a crawl, items are gathered by the Crawler, fed to the Content Processing Components, and then submitted to the Index:

As illustrated above, the Index files are physically structured in levels with a "master" index part file on top representing the vast majority of items in the Index and zero or more sub-levels (sometimes called the "Shadow Indexes") containing recent changes (the Journal is considered "Level 0"). The Index Plugin thread in the Index Component is responsible for "Checkpointing", the process of persisting the Checkpoint Sections from the Journal into the Index and the result is a new Index "part" file.

Also, Index files are never directly modified. Instead, when the Index parts on one level become >10% of the level above, they are "merged" into a new part file at that next level above. After the merging has completed, the parts on the lower levels (now merged into the higher level) can then be deleted from disk. During normal operation, the master part typically accounts for >90% of the active documents in the given partition (100% when everything is fully merged into the master part) and the levels below for the other ~10%.

Every 15 minutes, the Application Server Administration Services timer job running on the Primary Search Admin server triggers a check for each replica that compares this ratio of items in the master part versus parts in levels below. If greater than 10% exists in the lower levels, a Master Merge begins for that replica resulting in a new master part file. This has a few key implications:

Troubleshooting the Root Cause

Assuming a heathy SSA and all replicas had been updated to the same Generation, we would generally expect all replicas across all partitions to have a similarly sized footprint. More specifically, assuming all replicas had recently completed a Master Merge and no content is currently being submitted or deleted to/from the Index, all replicas would typically report a similar number of active documents and similar checkpoint size, which corresponded with the physical size of the files on disk.

In the reports described above, we see this consistency for the two replicas for Partition 0 (cells [I.0.0] and [I.1.0]) with 8563928 ActiveDocs as well as ~170GB for both the CheckpointSize and actual size on disk. Although cell [I.1.1] from Partition 1 reports a consistent number of ActiveDocs (8562280), the CheckpointSize and actual size on disk, at ~480GB, are almost three times the size of the replicas [cells] in Partition 0.

We also see that cell [I.1.1] (IndexComponent4 running on INDEX-SRV-D) reports "Merging = True". Given that the size had not reduced after several days (which should be more than enough time for the Master Merge to complete), we immediately suspected that the Master Merge had been running (and continually failing) for this entire time.

As described above, the Master Merge can require twice as much disk space than currently utilized – in this case, that could mean another ~500GB of free space needed to allow the Master Merge to complete. To confirm, we ran the following for the F:\ drive on the INDEX-SRV-D server:

Which generated a report such as:

Because the drive did not have sufficient space, one or more of the errors such as the following would get reported in the ULS logs:

Although not the case here, I have also seen merge failures occurring for reasons other than insufficient disk space, but those tend to be very scenario specific (e.g. where files are being locked by AV). Being said, for those cases, you can still look for failures during the merge such as the following and troubleshoot them accordingly:

In this scenario, the customer then extended the drive to 1TB allowing the Master Merge to complete for cell [I.1.1]. Upon completion, the CheckpointSize and actual size for this cell also corresponded with cells [I.0.0] and [I.1.0] from Partition 1.

Up to this point, we have largely and intentionally ignored the Degraded cell [I.0.1] (IndexComponent2 on server INDEX-SRV-C) because it merely was not the primary replica for Partition 1. As described above, the primary replica keeps all secondary replicas for the same partition in sync through Journal shipping. If a secondary replica cannot keep up for whatever reason (the most common culprit being Antivirus or some other underlying disk issue), the secondary replica is "left behind" and re-seeded ("seeding" is the process of copying over all of the index files in addition to the Journal files).

At the end of the initial report detailed above, we also found the following seemingly cryptic, but very informative reports (Note: I highlighted the cells consistently with any highlighting above using purple for cells in Partition 0 and orange/red for cells from Partition 1 )

Notice that most of the row names are essentially duplicated except for the trailing ".0" or ".1" in the report names (such as in_sync[SP4c93e7a037ce.0] versus in_sync[SP4c93e7a037ce.1]). In a nutshell, you should typically expect to see a report of each type times the number of Index partitions. For example, assuming the SSA had 25 partitions, you would see 25 rows labeled from ".0" to ".1" and up to".24" each listing the in_sync Cell names for that given partition (and so on for the left_behind, members, and primary reports, too).

In this case, fixing the primary Cell I.1.1 also allowed the seeding and subsequent Journal feeding from Cell I.1.1 to Cell I.0.1 to succeed… and thus, the Cell I.0.1 then also successfully transitioned from Degraded to Active.

On more than one occasion, I have need to separately run the "get-WmiObject win32_logicaldisk" manually to determine the FreeSpace on a given drive…. So now, that has been incorporated into the report as seen below: 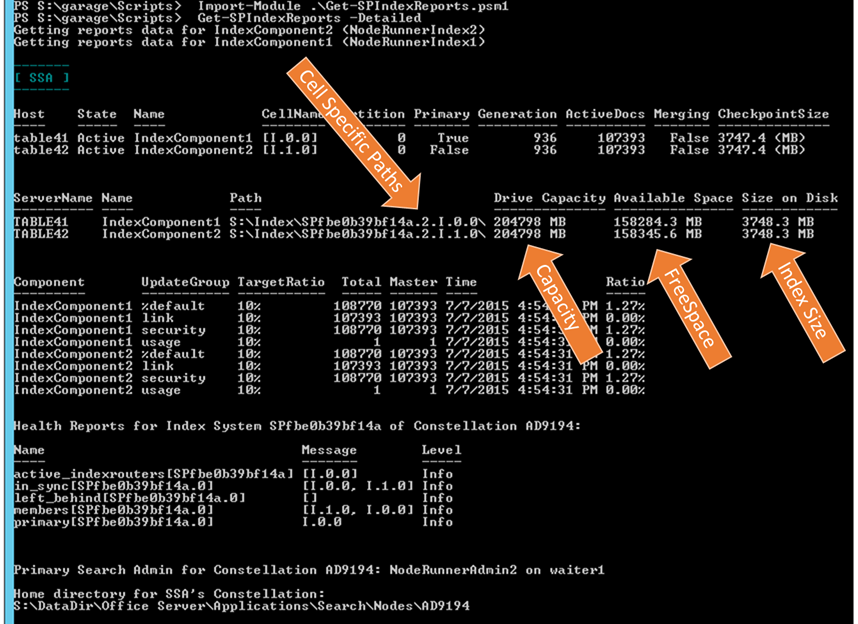 Also, in the original script, thanks to Kris Loranger, we found that the "Size on Disk" value could be skewed for servers with multiple Index paths all sharing the same RootDirectory value. In that case, the size being reported here was actually the sum of all replicas rather than just that single replica. By using the cell specific path (as seen here), this has since been fixed.

As I add more functionality or find more use cases, I will continue to post about them.

I hope this helps...