I’m excited to announce the Release Candidate of Visual Studio 2013, .NET Framework 4.5.1 and Team Foundation Server 2013!  The release is available for download now on the Visual Studio product website and is a "go-live" release.  Starting today, developers can also download Windows 8.1 RTM via their MSDN and TechNet subscriptions.

The RC release is the next big step toward the release of Visual Studio 2013.  Today I am also excited to announce that Visual Studio 2013 will RTM at Windows 8.1 GA and the Visual Studio 2013 Virtual Launch will be held on November 13th, 2013!  Available online around the world, more details can be found on the virtual launch event on the events page.

Trying out the Bits

Visual Studio 2013 contains great new features for developers across all Visual Studio languages and platforms.  I talked about many of the new features in my post on the Visual Studio 2013 Preview in June.  Features like synchronized settings, peek definition in the editor, UI responsiveness tools for XAML and HTML apps, async debugging, and Azure Mobile Services integration provide enhancements across a wide range of developer scenarios.

One of my favorite improvements in Visual Studio 2013 RC is the enhancements to the XAML editor.  Developers are authoring XAML for many of our platforms, from WPF to Silverlight to Windows Phone to Windows Store.

In the RC, we’ve added IntelliSense for Data Binding to the XAML editor.  This works with a DataContext defined in the markup, or with a design-time DataContext for cases where the context is provided in code-behind.

You are taken to the definition of that Resource.

The Cloud Business App template is powered by the same technologies as LightSwitch which provides unparalleled developer productivity through RAD experiences with the flexibility to write code when you want to.  This includes the ability to quickly and easily attach and consume data from multiple data sources and to define your own entities.  By default, without writing any code, Cloud Business Apps extend the Office 365 experience enabling your apps to facilitate collaboration and enable communication, and they provide an HTML based app UX that works great across the desktop and devices. 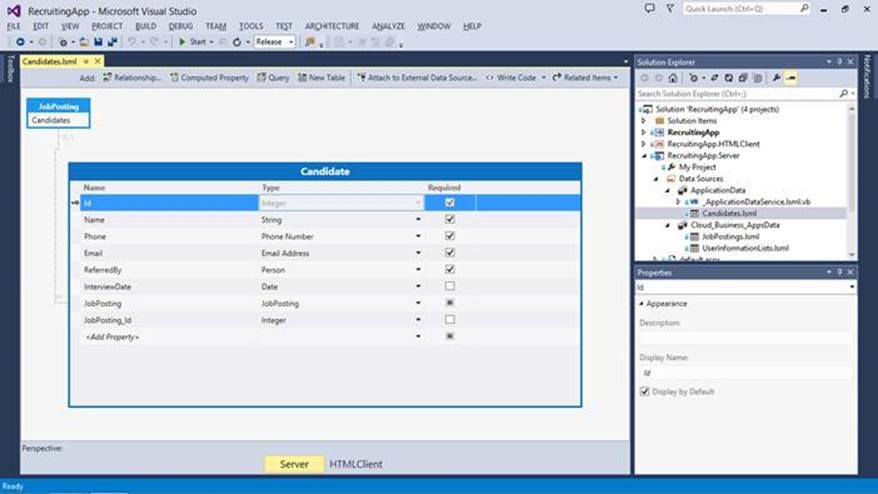 The Visual Studio 2013 RC is just a small sampling of how the Office 365 Cloud Business App template will enable developers to build modern business applications that extend the Office 365 experience and build upon the capabilities of Office 365 and Windows Azure.  There is much more to come in RTM, stay tuned.

My previous post from Build 2013 has more details about the Cloud Business App feature and vision.

During the Build conference, I wrote about the roadmap for C++ standards conformance in Visual C++.  Last week at the Going Native conference in Redmond, we hosted a great discussion about the present and near future of modern, standard C++, and talked about what’s coming in Visual C++ and C++ on Microsoft's platforms.  In Visual Studio 2013 RC, we’ve made more steps along the roadmap laid out at Build, adding C++ 11 features like using aliases, = default and non-static data member initializers. 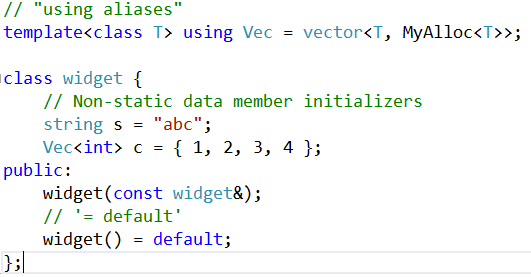 For more details, check out Herb Sutter’s “The Future of C++” talk from Build.

Less than a year ago, we released the first public preview of TypeScript, a language and tools for application-scale JavaScript development.  With Visual Studio 2013 RC we are including the most recently released version of TypeScript tooling (v0.9.1.1) as we continue to seek community feedback from our early adopters.

For more information on TypeScript, check out the TypeScript site and blog.

I’ve noticed as we’ve shown Visual Studio 2013 to developers, one of the most head-turning new features is CodeLens, a Visual Studio 2013 Ultimate feature which provides deep contextual insights inline in your source code.  CodeLens for C# and Visual Basic provides information such as the number of references, and recent changes from source control.

In the RC, deep Lync integration has been added, so you can easily contact the developer who most recently worked on a piece of code directly from the Visual Studio editor.  Several new indicators are also now available exposing Bugs, Work Items and Code Reviews related to the class or member, for developers working with source code in Team Foundation Server 2013.

More details about the CodeLens feature are available on MSDN.

In both Team Foundation Server 2013 RC and today’s update of the Team Foundation Service, we’ve added a new Charts feature to Work Item tracking.  Work Item Charting enables developers to quickly create charts to visualize data from work item queries. These charts can be created with just a few clicks and refresh automatically as data is updated.

For more information on this feature and other updates to TFS, check out the TFS release archive.

We made hundreds of fixes in the RC based on feedback on the VS2013 Preview release.  I encourage you to download the new bits and send feedback to the team:

Feedback can also be sent directly from the product, using the menu in the top-right corner of the IDE.