Developers targeting today’s mobile and cloud platforms require greater levels of choice than ever before.  Whether you are targeting iOS, Android or Windows on the client, targeting Windows or Linux on the server, or using a wide variety of languages and frameworks, our goal is to deliver developer tools and services that support the breadth of today’s developer needs.

Last November, we took two big steps toward delivering great tools for any developer working on any application – introducing the free and fully-featured Visual Studio Community edition of our flagship developer tools and announcing that we would be taking .NET Core open source and cross-platform.

Over the last 6 months, we’ve seen incredible results from both of these efforts with over 2.7 million downloads of Visual Studio Community and a vibrant ecosystem of developers and organizations rallying around open-source, cross-platform .NET development.

But we didn’t want to stop there! Today, I’m excited to introduce:

Together, these releases are another important step in opening up access to our developer tools and services to the broadest possible set of developers working on the widest range of applications and using a variety of development environments.

Building on its editor, Code delivers rich coding experiences beyond those seen in traditional text editors, including code assistance, code navigation, linting, and refactoring enabled within the core editor experience.  And Code understands Git, and delivers great Git workflows and source diffs integrated with the editor.

But developers don’t spend all their time just writing code: they go back and forth between coding and debugging. Debugging is the most popular feature in Visual Studio, and often the one feature from an IDE that developers want in a leaner coding experience. Visual Studio Code includes a streamlined, integrated debugging experience, currently with support for Node.js debugging, and more coming soon.

Visual Studio Code builds on top of a tools service architecture to enable rich code analysis support for C# and TypeScript.  Based on technology from the OmniSharp and TypeScript Server projects, the language services of Visual Studio Code are available as open source projects and offering integration into a wide range of alternate editors – including Sublime Text, Vim and Atom.  In future previews, we will be opening up the public extensibility model for Code, enabling an even broader range of rich language integrations with Visual Studio Code.

A preview of Visual Studio Code is available for download now.

For developers targeting the Windows ecosystem, Visual Studio 2015 RC provides great tools for building apps and games for the Universal Windows Platform spanning that run across all Windows 10 devices, including phones, tablets, PCs, Xbox, IoT and HoloLens.  With new UI Debugging Tools, an improved XAML designer and enhanced profiling and debugging features, developing apps for Windows has never been easier.

For mobile developers, Visual Studio 2015 includes tools for building cross-platform apps that run on all of today’s popular mobile platforms including Android, iOS and Windows. With Visual Studio developers can target those platforms using Apache Cordova, Xamarin, or C++.

For web and server development, Visual Studio continues to provide many choices for application development with tooling for Python or Node.js, and of course .NET options with languages such as C#, Visual Basic or F#.

­In addition to new platform support, Visual Studio 2015 brings dozens of new productivity and diagnostics features to developers.  The list of improvements here are numerous, but one important example is the new Diagnostics Tools window that provides on-by-default access to key performance and memory usage information during normal debug sessions, giving you insights into application performance earlier in the development cycle.

The Visual Studio 2015 RC is available for download now.

Today we delivered the next milestone in our .NET 2015 vision, announcing the availability of the full .NET Framework 4.6 RC and .NET Core 5 Preview, as well as a preview release of the .NET Core runtime and libraries for Linux and Mac OS X.

Together, Visual Studio 2015 RC and .NET Framework 4.6 RC deliver a number of new tooling experiences for WPF developers as well improvements in stability, performance and feature enhancements in the WPF runtime.

.NET Core is being implemented and supported by Microsoft and developed as a set of open source projects on GitHub under the .NET Foundation in close collaboration with an active developer community of individuals and organizations invested in taking .NET cross-platform.  Since we began the process of open sourcing .NET Core last November, we’ve seen great momentum for the project, with new capabilities, new platforms, and new community engagement coming fast.

Today, we are making an early preview of .NET Core for Linux and Mac OS X available for developers to experiment with. 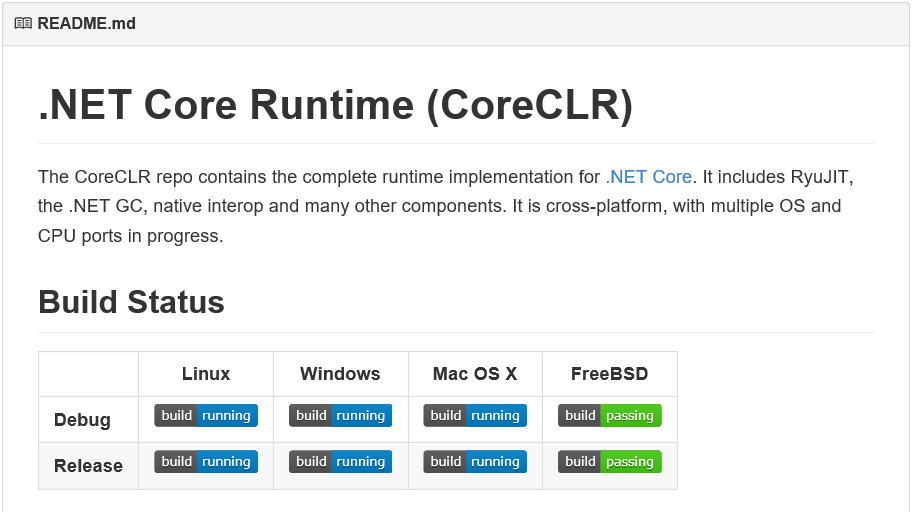 Also part of the .NET 2015 wave, ASP.NET 5 is the most significant architectural update to date, making ASP.NET leaner, more modular, cross-platform, and cloud optimized.  ASP.NET 5 runs on Windows, Linux and Mac OS X and built on top of .NET Core.  Today, ASP.NET 5 RC is available and tools for ASP.NET 5 are available as part of Visual Studio 2015 RC and Visual Studio Code.

Visual Studio Online Application Insights, available in public preview today, is an analytics solution for any developer working on any application, providing a comprehensive 360° view of your application’s performance, availability and usage.  With today’s public preview, we are launching a new cloud-friendly pricing model based on telemetry volume per app and designed to offer a great feature-complete free pricing tier.

Today’s releases continue to expand access to our runtimes, tools and services to any developer and any application.

Check them all out now at visualstudio.com, watch the Build 2015 session recordings and catch-up on your favorite features with new short Connect(“on-demand”); feature videos available now.