Across the industry, developers are increasingly shifting focus to mobile-first and cloud-first development.

With bring-your-own-device trends in the enterprise, and heterogeneity in the consumer mobile device market, developers are increasingly focused on building apps that can target a variety of devices.  We are committed to enabling developers to build apps for this heterogeneous, mobile-first world with Visual Studio for the technology of your choice – whether .NET, C++ or JavaScript.

Last November, we announced a partnership with Xamarin to enable C# and Visual Studio developers to target additional mobile devices including iOS and Android.  Developers using Xamarin and Visual Studio can create native apps taking advantage of the underlying device, with the great productivity of C#, and sharing code and libraries between their iOS, Android and Windows applications.

Today, we released a preview of Visual Studio tooling support for Apache Cordova.  Apache Cordova is a popular open source platform for building multi-device hybrid mobile applications using HTML, CSS and JavaScript, targeting a broad range of mobile devices.  This includes support for iOS and Android, as well as support for Windows Store and Windows Phone thanks to Microsoft Open Technologies contributions to the project.

With the Cordova tools in Visual Studio, web developers can use their existing skills in HTML and JavaScript to create hybrid packaged apps for multiple devices while taking advantage of each device’s capabilities.

Project templates are available for both JavaScript and TypeScript, and provide a standard blank Cordova starter project.  Developers can pick their HTML/JavaScript framework of choice, whether Backbone and jQuery UI, or Angular.js and Bootstrap, or WinJS.

Projects can be built, deployed, and debugged against a variety of devices, device emulators and web-based mobile simulators.  By default, you can use the Apache Ripple simulator to test your application in the browser before deploying to a device.  This preview release also supports attaching the Visual Studio debugger to Ripple or a local emulator or a device.  You can stay in Visual Studio while debugging your JavaScript and DOM layout running on an Android 4.4 device

By installing and configuring the vs-mda-remote npm package on a Mac, you can even build for iOS, deploy to a device via iTunes, or start your app in the iOS Simulator on a Mac right from Visual Studio.

Apache Cordova is a popular choice today for applications that share a large amount of code across a wide variety of devices.  Combining Apache Cordova with Visual Studio provides a great end-to-end development experience for mobile-first development.  It's great to be partnering with the Apache Cordova project on delivering these experiences.

“It is very exciting not only to welcome Visual Studio developers, but also to welcome first class tools to Apache Cordova. This development is a great validation of the hard work of the MS Open Tech team and Apache Cordova contributors. We look forward to continuing this cool work with Microsoft’s developers.”

Today’s preview release is an exciting first step to make Visual Studio the best tool for creating multi-device apps across iOS, Android and Windows. Whether you want the flexibility of native apps powered by .NET and Xamarin, or the standards-based development provided by the Apache Cordova platform, Visual Studio will support your choice with an amazing development experience.

With the Office 365 APIs preview release earlier this year, a rich set of REST APIs were exposed from the platform providing access to Mail, Calendar, Contacts, and Files in Office 365.  These services can be integrated into any application to connect to the high value enterprise data that is available in Office 365.

Today, we have made available custom client libraries for developing against these Office APIs from your multi-device mobile applications – both for C# and Xamarin, and for JavaScript and Cordova.

Last month we shared updates on a variety of new investments in .NET primarily around the core of .NET and device development for Windows.  This included universal Windows apps, the .NET Native ahead-of-time compiler, the .NET Compiler Platform ("Roslyn") including new C# and VB compilers and a preview of new language features being considered for C# 6.

On top of these releases, we also announced the formation of the .NET Foundation, an independent organization created to foster open development and collaboration around the growing collection of open source technologies for .NET.  Throughout the last month, we've seen tremendous excitement around the .NET Foundation, with over 25 projects submitting proposals to move into the Foundation.

Today, we have added to these announcements some additional details about .NET on the server.  On the cloud and on servers, the future of .NET is about the modern web.  Our goal is for the next version of .NET to be the first and only framework designed for the cloud, helping you to create on-premises applications and move them to the cloud with no changes and at the same time leveraging all the power of the cloud.

A cloud-optimized .NET dramatically reduces the footprint of the framework by removing libraries that you won’t use in server applications such as Windows Forms and WPF, and only including the capabilities you are using in that particular application.  This cloud optimized mode allows the whole framework to be deployed with the application, which means you can upgrade on an app by app basis and you can run different versions side-by-side.  We're also developing this with cross-platform in mind, and working with the Mono team to get it working on Mono.

ASP.NET vNext is an evolution of ASP.NET. Everything you know today about ASP.NET will apply to ASP.NET vNext. You can use the existing libraries or the new versions for those libraries in .NET vNext and get immediate benefits.

Web development in the cloud demands a simple, lean development experience built on top of a composable framework.  The next version of ASP.NET will be composed from a collection of packages, with each application describing its dependencies.

Developers will also be able to make changes to their web applications and see the results on a browser refresh, with no compilation needed.  This significant developer productivity enhancement is based on improvements to load times in the underlying CLR, as well as use of the new .NET Compiler Platform ("Roslyn").

On top of these foundations, Visual Studio will continue to provide the rich IDE experience for ASP.NET vNext that has made ASP.NET with Visual Studio a great environment for developing compelling web sites, apps and services. 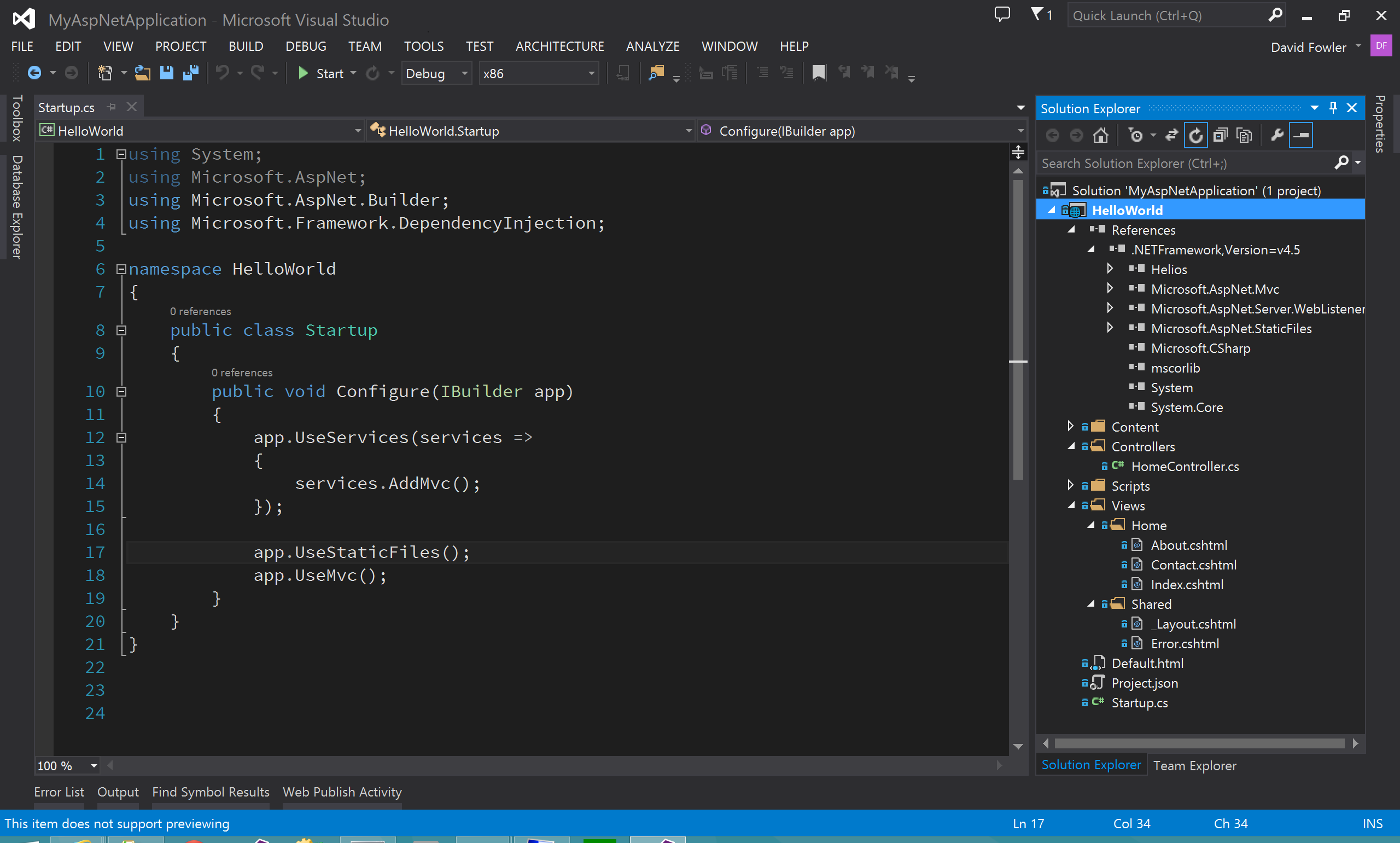 Windows 7 and Windows 8.1 in the Azure VM Gallery for MSDN Subscribers

MSDN subscribers now have access to virtual machine images for Windows 8.1 and Windows 7 in the Azure VM gallery.  These images make it even easier for MSDN users to do development and test in the cloud on Azure using their existing benefits.  These images build on top of the Visual Studio 2013 images already in the gallery, and the Azure credits benefit that all MSDN subscribers have access to.

Mobile-first, cloud-first development is changing the way that developers think about the applications they deliver.  Extending the incredible productivity of Visual Studio to multi-device development provides a great opportunity for developers to build rich applications targeting multiple mobile platforms.  And the broad range of investments in .NET we are making add up to one of the most exciting moments in time for the .NET ecosystem as a platform that spans from mobile to the cloud.