Update: The final release of Visual Studio 2015 and Tools for Universal Windows apps is now available. Read more about the release here.

Windows 10 will be an exciting release for developers, with support for Windows universal apps that run across all Windows 10 devices and improved tooling for every Windows application type.

You can create a Windows universal apps with the new project templates in Visual Studio 2015 in a language of your choice – C#, VB, C++, or JavaScript. With Windows 10, it is now possible to have a single universal app project that when deployed can run on all Windows 10 devices like PC, Phone, Tablet, or XBOX. However, just as on Windows 8.1, you still have the option to have multiple projects in your solution that you can tailor for functionality and form-factor exhibited by various devices running Windows 10 and can maximize code sharing across those projects using Shared projects. 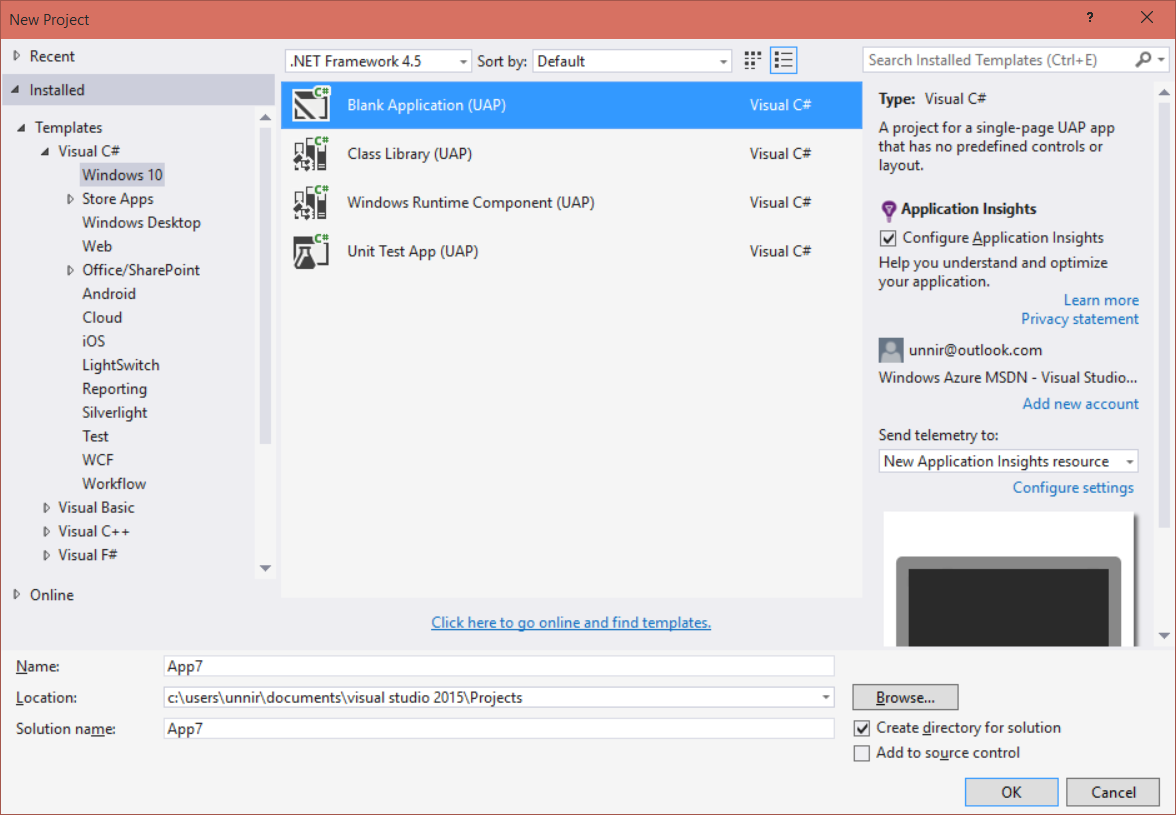 Testing your Windows universal apps on a PC and phone

You can deploy a Windows universal app to any device running Windows 10. To deploy applications created using this preview version of the tools, you need to have the latest PC flight of Windows 10 installed. Deploying the application to a phone running Windows 10 is not yet supported and will come in the future with a flight of a future release on Phone. In the meanwhile, you can experiment by deploying your app to a Windows 10 Phone emulator that is installed as a part of these tools. Support for other Windows 10 devices like XBOX is not yet available in this preview. 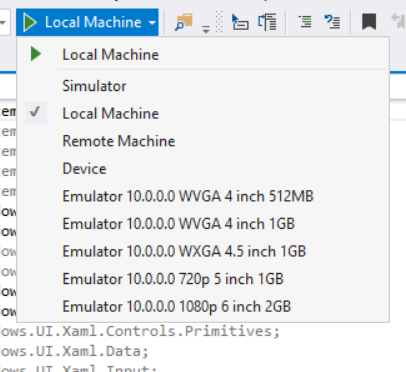 Tailoring your app for a particular device

With Windows 10 universal apps, you can choose to tailor your app to light up additional device-specific capabilities using adaptive code patterns. You can reference an Extension SDK that supplies either Windows or Windows Mobile specific APIs and write code that checks for the presence of the API when running on any device before code execution. 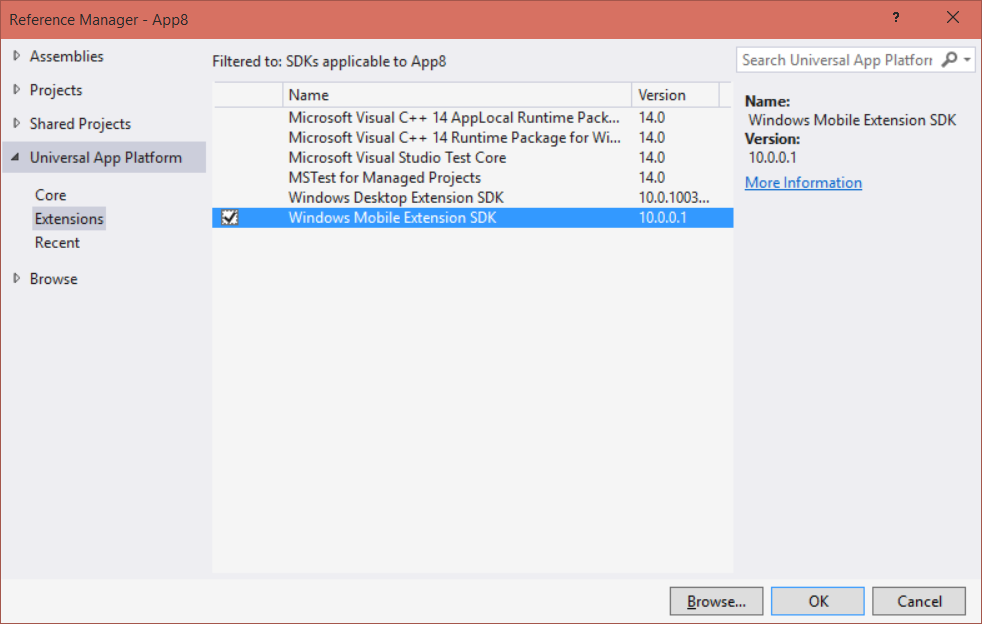 In the example above, we have added a reference to a Windows Mobile extension SDK. Wrapping the access to such an API in an if block allows for the code execution to be bypassed when the app is running on any Windows 10 device that does not support the API.

This enables you to adapt your application to deliver the right user experience on the right device.

All of the capabilities that we have introduced in previous previews of Visual Studio 2015 are also available for Windows universal apps including the new diagnostic tools, XAML UI debugging and all of the profiling tools. Together, these tools make debugging and diagnosing your Windows apps easier than ever.

All of your Windows Desktop applications (WPF, Windows Forms, Win32) continue to work on Windows 10 without any changes. With the Visual Studio 2015 tool for Windows 10 you can now leverage the new Windows 10 APIs in your Win32 applications. Windows 10 also comes pre-installed with .NET Framework 4.6 which includes many new features including improvements in WPF and Windows Forms. 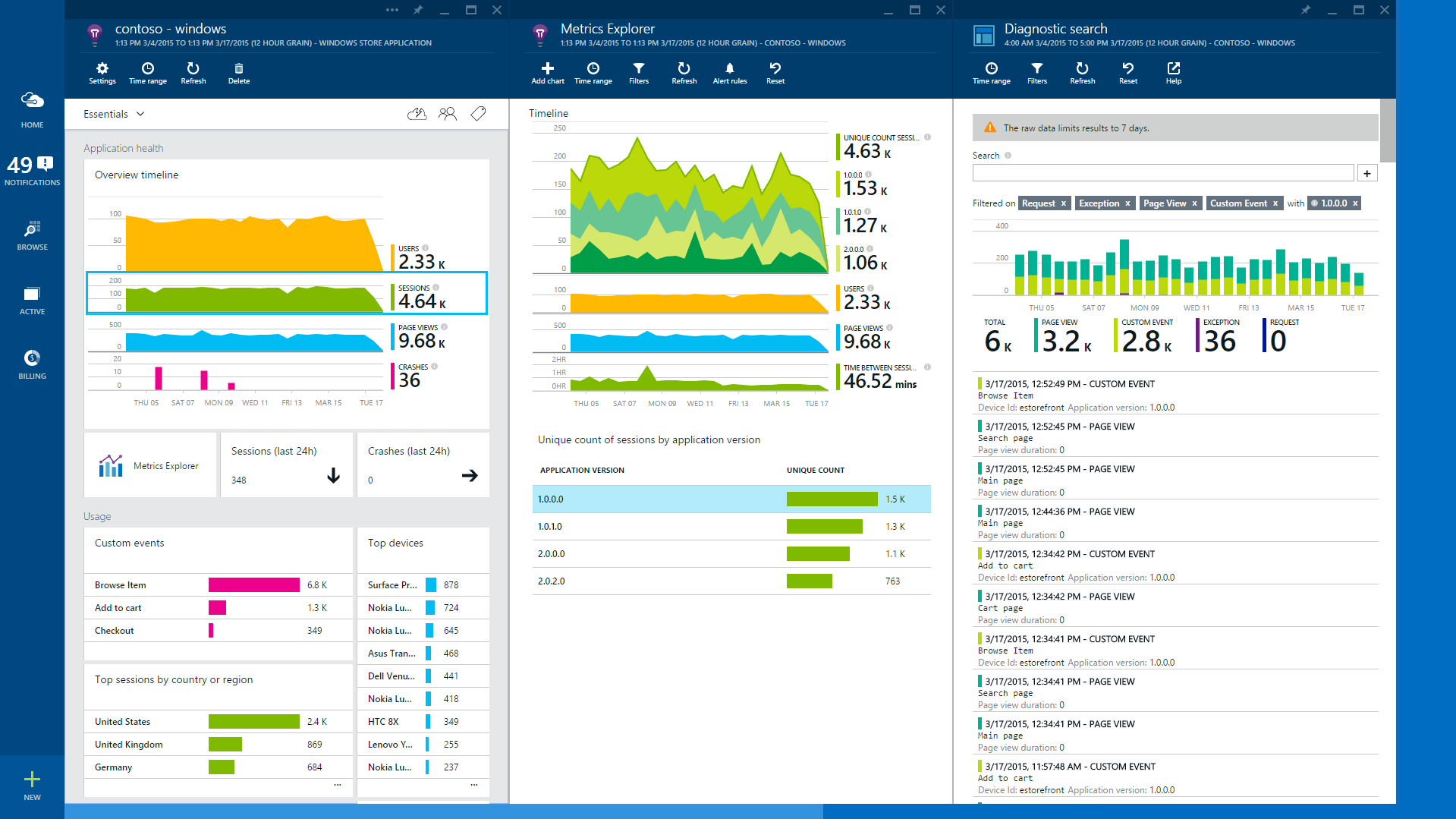 This is an early preview of the Windows 10 tools for Visual Studio 2015, and a good opportunity to test drive the new Windows 10 Technical Preview tools. If you aren’t already a Windows Insider, sign up today to get access to the tools and the Windows 10 Technical Preview. Then try out the tools and send us your feedback via the Visual Studio Connect site, Send-a-Smile or the on Windows tools forums.