I finally had some time on my hands, so thought to try and get around to blogging about the memory architecture of SQL server 2012/2014. The memory architecture for the SQL Server relational database engine was practically overhauled with SQL Server 2012, and most of it has remained the same in SQL 2014. Please note that the In-memory OLTP feature introduced in SQL 2014 has a different engine dedicated to it, which will not be covered as part of this blog post.

Another major change that you will experience is that with the introduction of the Any Size Page allocator, the SQL Server "Max Server Memory" setting now controls the memory allocated for the Buffer Pool, CLR, as well as larger than 8 kb (single page) allocations. In prior versions, max server memory only controlled the size of the buffer pool, which made it difficult for DBA's/architects to apportion memory between applications/instances on shared servers. SQL Server 2012 gives us the ability to establish much tighter control on memory allocation using tools such as resource governor, because the resource governor is now able to control all page allocations.

The buffer pool in SQL 2012 does not contain any memory management functionality. It just manages the caching of database pages, and is now treated like a regular, external cache. Considering that the Buffer Pool is still likely to be the largest consumer of memory though, it is allowed to use almost all free memory from the SQL memory manager.

There are several visual representations of the changes to memory manager in SQL 2012 floating around on the internet, which I've included for your benefit:

As you might have noticed, memory allocation for CLR forms a bit of a "special case", in that even though it uses VAS Allocator(Virtual Allocator in the diagram), it still is governed by the limits set using the "max server memory" setting in SQL. An auxiliary effect of this is that CLR is now initialized at SQL Server DB Engine startup, as opposed to being initialized when it was called in earlier versions of SQL Server.

The memory manager architecture in SQL Server 2012 can be broken down into the following components: 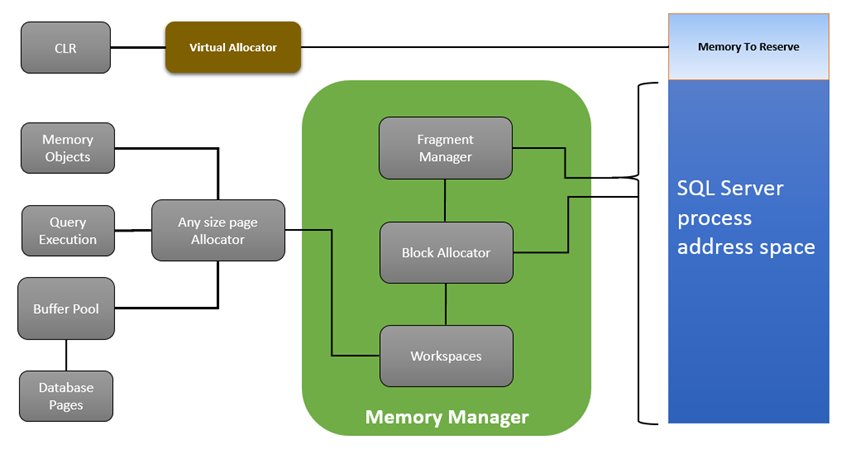 Let's talk about how memory is allocated using the new memory manager. The first step is, of course, to determine which allocator to use, based on the amount of memory requested. This involves traversing the workspace hierarchy to find the appropriate allocator. If we're unable to find an allocator of the exact same size, the next highest size allocator is used.

If no partial block was found, then go up to the parent block allocator and request a new block [empty] to be created. This corresponds to the process of growing against the target memory configured [for conventional and locked page memory].

If during the above process we were not able to find a suitable block, then we switch to the next NUMA node and repeat the same process. Switching to next node happens once the target for current node is reached. If all nodes reach target memory then an OOM (Out Of Memory) error is returned.

In order to free a block, we first find the parent block descriptor for the current block that is being freed. Next, we return the block to the free list and update the state in the descriptor. It can go to two states, Partial or Empty.

The rest of the components work in pretty much the same way as earlier versions of SQL Server. For more details on the memory architecture up to SQL Server 2008 R2, please refer the following posts:

As always, comments and feedback are appreciated.

Disclaimer: The information in this weblog is provided “AS IS” with no warranties, and confers no rights. This weblog does not represent the thoughts, intentions, plans or strategies of my employer. It is solely my opinion. Feel free to challenge me, disagree with me, or tell me I’m completely nuts in the comments section of each blog entry, but I reserve the right to delete any comment for any reason whatsoever (abusive, profane, rude, or anonymous comments) – so keep it polite, please.