To start with the new wizard (and to follow the examples presented in this article), you will need:

Note: Until CTP3/October 2015 refresh of SSMS, encrypting existing data either required writing custom code or using the SQL Server Import/Export Wizard, which we described in the Encrypting Existing Data with Always Encrypted article. While the Import/Export Wizard continues to be a useful tool when you need to migrate your data from a plaintext version of a table/database to a different table/table using Always Encrypted, the new Encrypt Columns wizard is now the recommended approach to enable Always Encrypted and encrypt data in an existing database/table.

You can launch the wizard from multiple entry points: 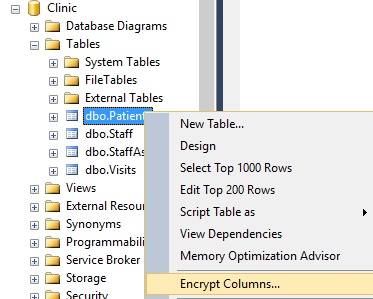 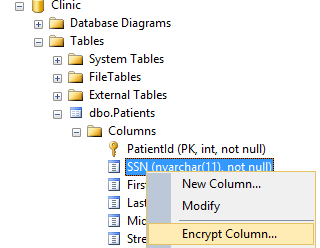 Once the wizard starts, the Introduction page should open. Click Next > to go to the next step. 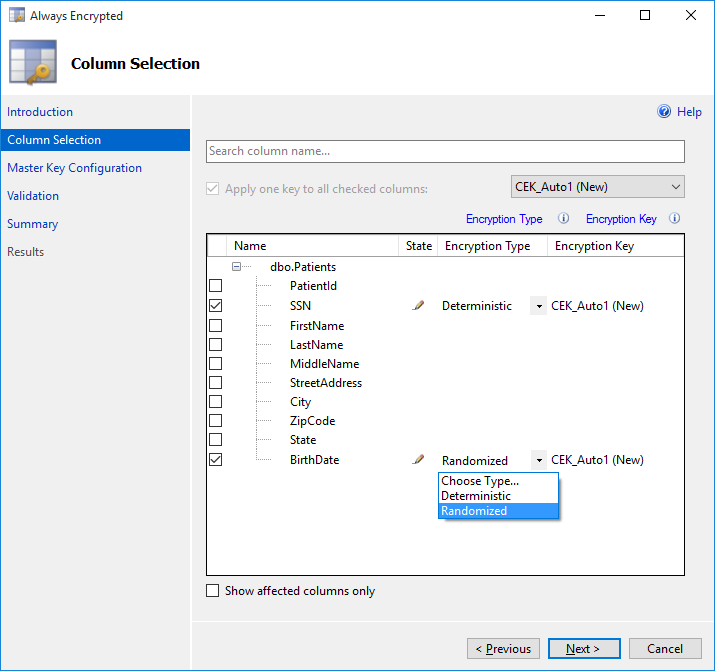 On the Column Selection page, select columns you want to encrypt using the checkboxes next to column names.

Note: Always Encrypted is not supported for columns using certain data types (e.g. XML, CRL types, aliases, etc.) or certain features (e.g. columns with check constraints, statistics, etc.). For the complete list of limitations, see Always
Encrypted (Database Engine). In its current version, the wizard checks your schema against a subset of unsupported conditions. For example, the wizard will not let you select a column that uses an unsupported data type. However, the validation against the complete list of limitations is only performed when you complete the wizard steps and trigger the actual encryption. In one of the next releases of SSMS, we will enhance the logic in the Column Selection page to ensure the validation is more complete.

Next, for each selected column, you need to pick an encryption type: Deterministic or Randomized.

You will also need to choose a column encryption key for each column to be encrypted. As we discussed in previous articles, Always Encrypted uses two types of keys:

Click Next > to go proceed to the next step. 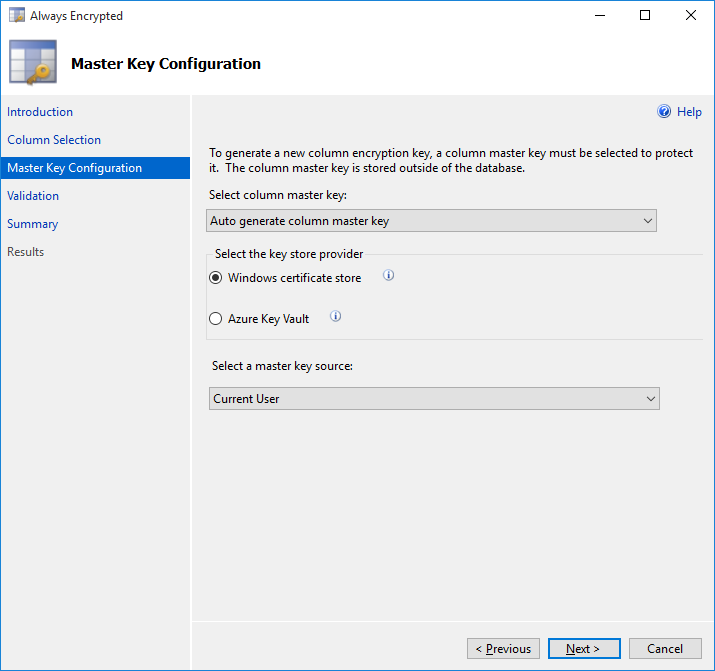 Generate PowerShell or Proceed with Encryption 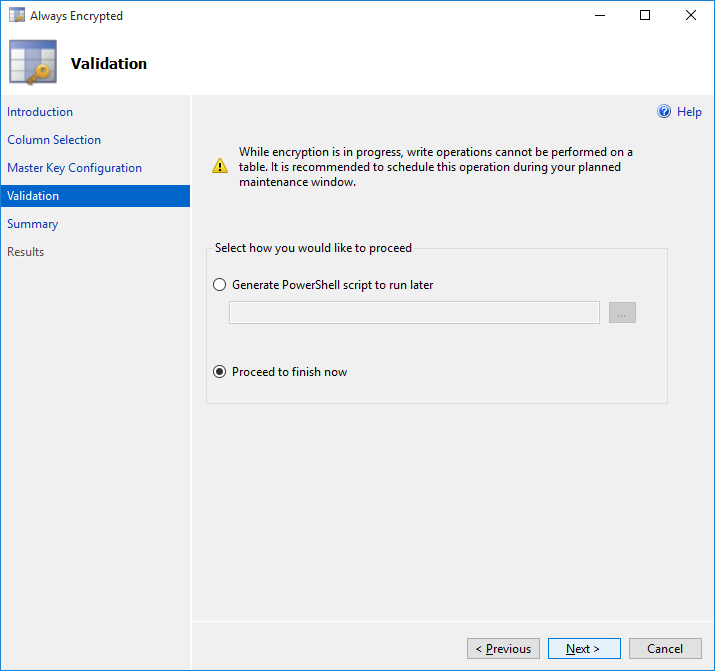 In this step, you can either choose to save the encryption workflow as a PowerShell script to be executed later, or to proceed with encryption now.

In general, it is recommended you create a database backup before running the wizard.

Examine the encryption steps and click Finish to trigger the workflow. Monitor progress of encryption and then close the wizard. 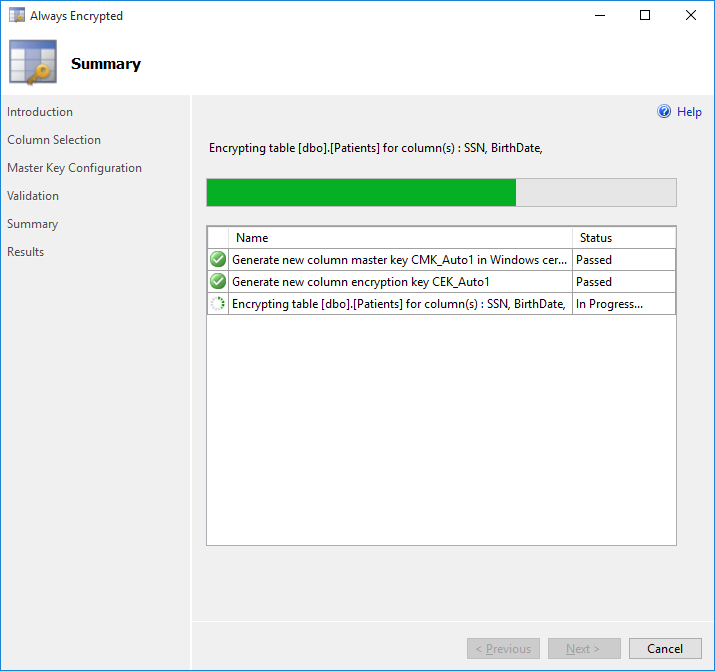 Let us examine the results of running the wizard:

If you script the schema of the table, containing columns you have encrypted, you will notice the ENRYPTED WITH clause has been added to the encrypted columns.

In Object Explorer, navigate to the Security/AlwaysEncrypted Keys folder under your database. There, you will find entries for both the column master key and the column encryption key, the wizard generated.

When you retrieve data from your table, you will notice binary encrypted values in the columns you have encrypted. 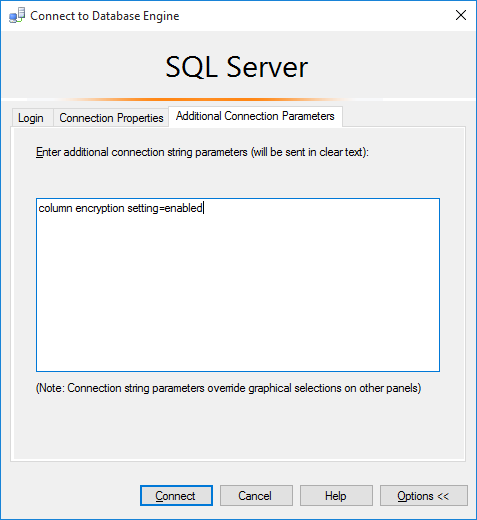 Re-run the same query using the new connection. This time, the query should return plaintext values from encrypted columns. Why? Because the above connection string keyword/value enables Always Encrypted in the client driver and causes the driver to transparently decrypt the data retrieved from encrypted columns. Since you have an access to the column master key protecting your columns (the key is either in Windows certificate store on your machine or in a vault you can access), decryption succeeds and you can view plaintext data. 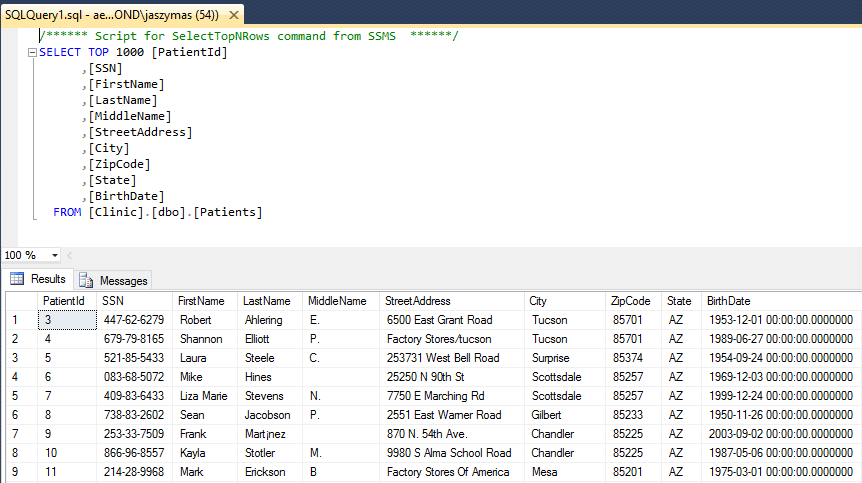 To see what happens if you instruct the driver to decrypt query results, but you do not have access to your column master key, perform the following test:

Even if you connected to the database as a DBA, you will get an error, indicating you have no access to the column master key and, therefore you will not be able to see the data in plaintext (you can still retrieve ciphertext, if you connect without column encryption setting=enabled). See the previous article, Always Encrypted Key Metadata, for details on how the keys and key metadata are used for decryption.

You now have encrypted sensitive data in your database. Next:

If your column master key is a certificate in Windows Certificate Store, you will need to deploy the certificate to each machine hosting your application/service to the right store location (Current User or Local Machine).