As soon as backup initiates, it pre-allocates three files of approximately 9.2 GB as shown below:

After backup completion, it generates 3 files of approximately 2.05 GB as shown below.

This is correct behavior and already documented in the KB article https://support.microsoft.com/kb/2001026 .

Over here we had enough disk space to accommodate all the pre-allocated files.

Now, let us simulate a situation where we have disk space just enough to pre-allocate one file. Let us say 10.7 GB as shown below: 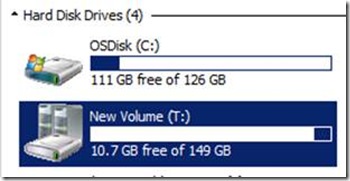 In this situation, the space is not enough to create three pre-allocation files. So what SQL Server does, is create maximum number of pre-allocation files and for remaining backup stripes create 0 KB files to start with and increases its size as the backup proceeds as shown below:

The available disk space keeps on decreasing and the 0KB file (created initially) keeps on increasing as backup proceeds as shown below: 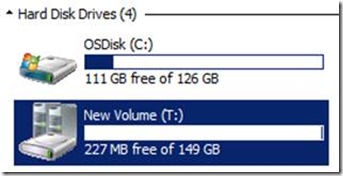 Finally when the available space becomes zero, the backup fails with following error:

Now, we decreased the disk space to 8.6 GB, with an assumption that backup will fail again due to lack of disk space:

Then we executed the backup command:

We found that it didn’t go for any pre-allocation and generated three 0KB files as shown below:

Now as the backup proceeds, these 0KB files increase in size until backup got over. As shown below, the final compressed backup files stripes (of size 2.05 GB approx.) were created after successful backup:

Here it works as if we have enabled trace flag 3042.

So, this clearly states that backup is not failing during pre-allocation. Backup tries to create maximum number of pre-allocated files depending on disk space available and for rest of stripes, it creates 0KB files, which grow in size as the backup command proceeds. Only hindrance in this process is disk space. If we have less disk space for the compressed size of stripes of backup, the backup command will fail.

To simulate this we had to create a scenario.

If our logic is correct, let estimate for the disk space required for this simulation

Now the space requirement is 13.8+1.4 = 15.2 GB. So, 15.2 GB is not enough for 3 stripes of backup however it is sufficient enough to accommodate 1 pre-allocated stripe and two compressed backup stripes.

Over here we could free up space of 15.6 GB so, after successful backup, space available with disk should be near to 9.4 GB. 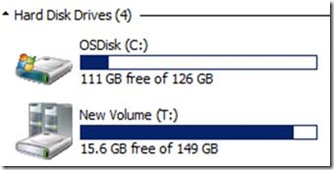 As expected backup created 1 pre-allocated file of size 9.2 GB and two stripes of 0KB files. The 0KB files started to increase in size once the backup proceeded.

As predicted, the backup completed successfully and we get following confirmation from SQL Server:

At this point of time we could see that the file size of each stripe was nearly 2.05 GB.

And the disk space available was around 9.46 GB which is close to our calculation.