MySQL to SQL Server Migration: How to Use SSMA

In this blog, I’m going to walk you through the process of converting the MySQL Sakila-DB sample database to SQL Server 2008 R2 Express using the SQL Server Migration Assistant for MySQL v1.0 [Updated:  Please obtain the lastest SSMA for MySQL] (SSMA). The Sakila-DB database has tables, views, stored procedures, functions and triggers that make the conversion interesting. The sample is based on the Inno-DB example, but does have one MyISAM table. SSMA also allows you to migrate your MySQL databases to SQL Azure, but we’ll save that topic for another post.

The easiest way to download SQL Server 2008 R2 Express, SQL Server Management Studio and SSMA is through the Microsoft Web Platform Installer (WPI). Once you’ve downloaded WPI, you can select from a variety of tools and products that can get you up and running using IIS, PHP, and SQL Server in no time. 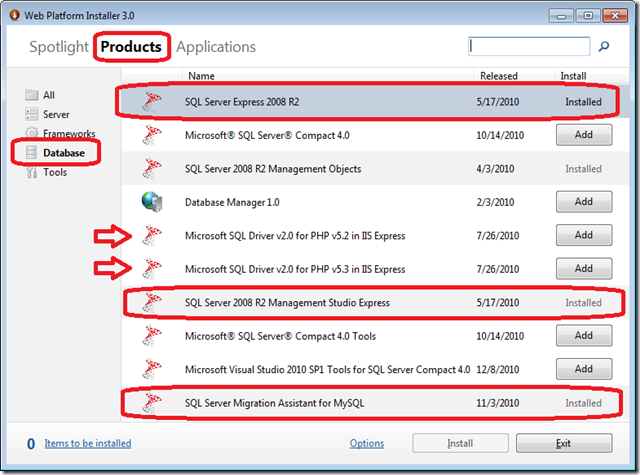 I’ll focus on the minimum set of tools you need to get SQL Server 2008 R2 Express and SSMA up and running. once you launch WPI, click on the Products tab at the top tool and then select Database in the navigation page. In the image above, I’ve already installed the tools, but for the new install, you’ll click on the Add buttons to the right of the circled products to get you up and running. If you are running your application under PHP, you might also want to select one of the two PHP drivers for SQL Server as well. Once you’ve selected your tools, just click on the install button to start the process.

WPI is not without flaws. SSMA requires the “MySQL OSBC Driver 5.1 or above” download to connect to your MySQL instance that comes from the MySQL downloads site. Once at the Download Connector/ODBC page, your need to download either the x32 or x64 version of the driver based on the machine architecture for the system you are running the SSMA client. Just follow the installation instructions from the installer. The default installation settings will be good enough to get you going.

Other Helpful Downloads for SSMA and this Blog

You’ll also want to download the “Guide to Migrating from MySQL to SQL Server 2008” white paper, though this blog and others to follow will keep you on track.

If you don’t already have the Sakila-DB database for MySQL installed, the link to the download and instructions for installing it can be found at the blog post titled “Learn MySQL With Sakila sample Mysql Database”

SSMA is a free tool, but does require you to associate a Microsoft Live ID for identification purposes. You must download a registration key. To help you with the registration process, a License Key Required dialog box opens the first time that you start the SSMA program. Use the following instructions to download a license key and associate the key with SSMA.

After SSMA is installed and licensed, you can use SSMA to migrate MySQL databases to SQL Server 2008 or SQL Azure. It helps to become familiar with the SSMA user interface before you start. The following diagram shows the user interface for SSMA, including the metadata explorers, metadata, toolbars, output pane, and error list pane: 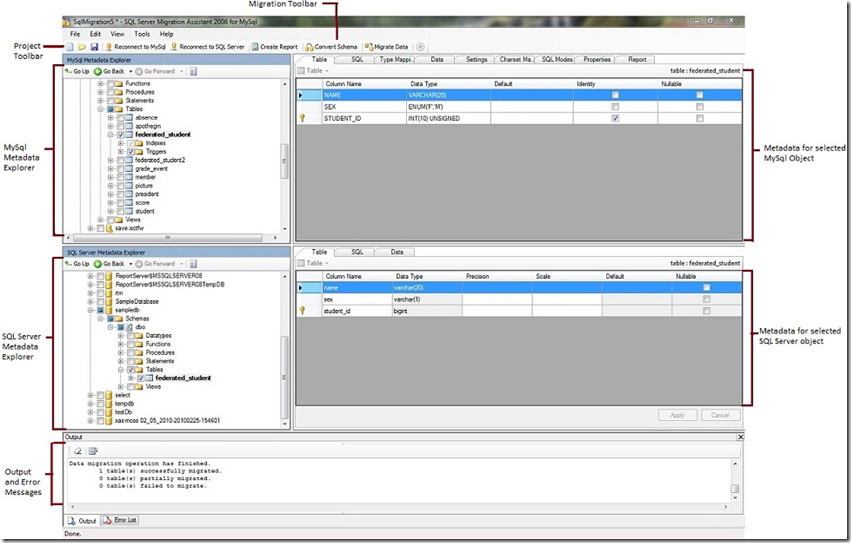 Basic Steps for Migration of MySQL to SQL Server

To start a migration, you’ll need to perform the following high level steps:

After you synchronize converted schemas with SQL Server 2008 R2 Express, you can return to MySQL Metadata Explorer and migrate data from MySQL schemas into target database.

Let’s walk through the specifics.

You’ll enter in your project name and then confirm that you are migrating to SQL Server. The Migrate To dropdown also allows you to choose SQL Azure, but that’s for another post. Once you make your selection, you are locked into the target backend.

Connect to a MySQL Database

To Connect to your MySQL instance, you’ll issue the File | Connect to MySQL command or click on the tool bar button that launches the following dialog: 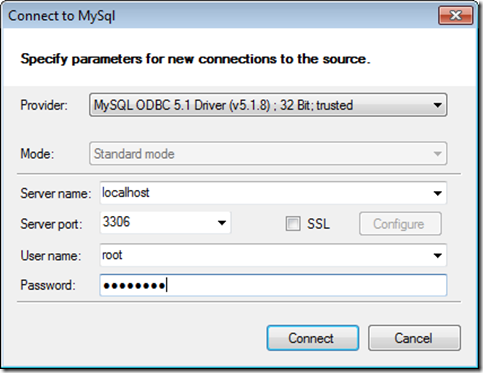 If you forgot to to install the MySQL ODBC driver mentioned at the beginning of this blog, simply go to the download site, install the driver, and then issue the Connect to MySQL command.

Once you are connected, you’ll see the MySQL instance in the MySQL Metadata Explorer. You’ll want to expand the Databases node along with the Sakila database node and then check the box next to Sakila. This selects the database you want to migrate. Next, right click on the Sakila database and select the Create Report command or press the Create Report command on the toolbar as shown below. 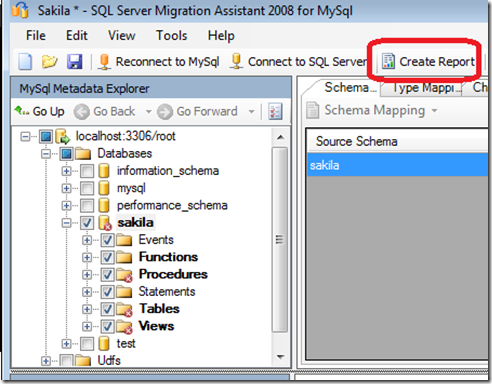 Here is an example of the Assessment Report for the Sakila database. 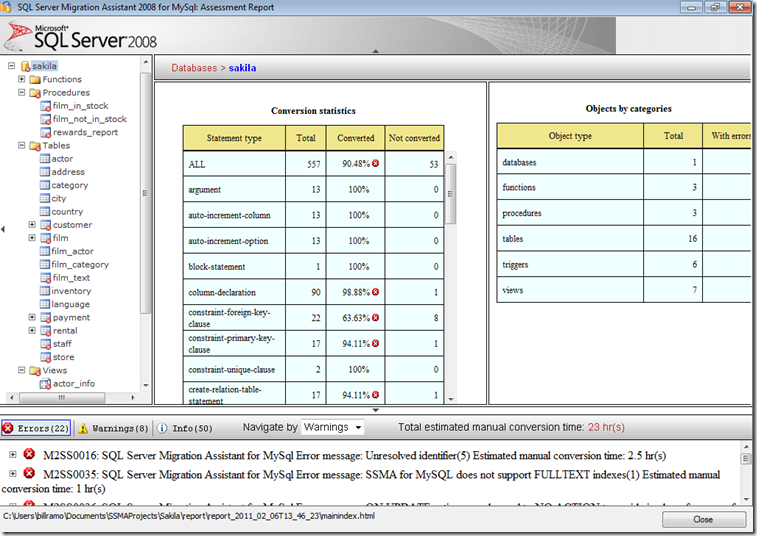 In future blog posts, we’ll work through the specific problems that are in this report. For now, we’ll ignore the problematic objects for the schema and data migration steps. For now, close the report and then uncheck Functions, Procedures and Views nodes to take them out of the conversion. Then uncheck the tables with errors as shown below. 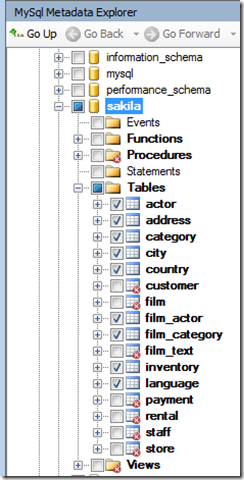 Go ahead and click on the Create Reports command to verify that there are no errors.

You can select an existing database to migrate to using the Database control. You can also type in the name of a new database. In this case, use Sakila as shown below. 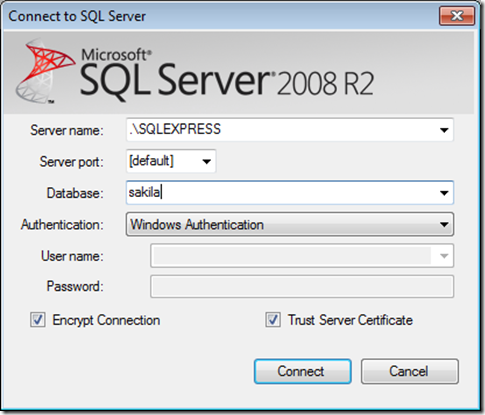 Once you click connect, SSMA prompts you if you want to create the database. Choose Yes to create the new database. When connecting to SQL Server Express instances, you’ll receive the following warning indicating that you won’t be able to use the server-side data migration engine. This engine is used for larger migration projects.

You can Continue from this dialog to start the actual migration process. 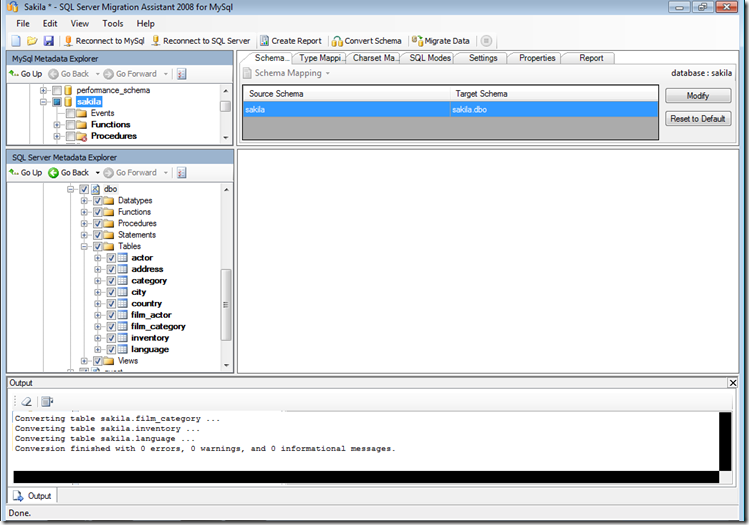 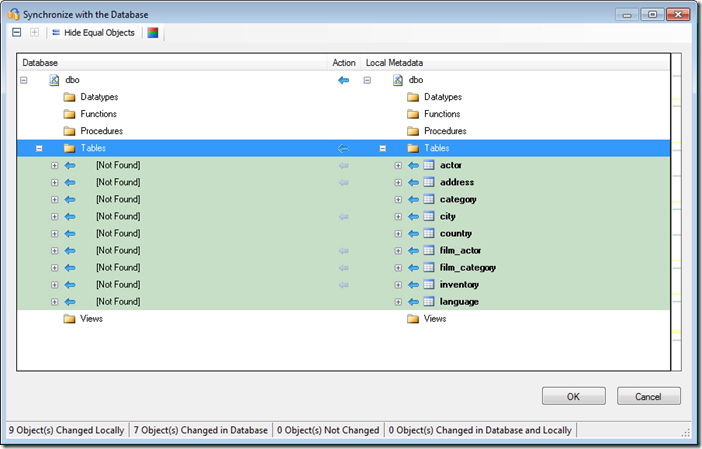 When you click OK, SSMA issues the CREATE TABLE statements to create the objects on the SQL Server target. There are some errors in this example because many of the tables selected have foreign key relationships to some of the tables that we excluded earlier. These errors can be ignored for now.

The last step is to migrate the data into the tables. To complete the migration, select the Tables node within the MySQL Metadata Explorer for the Sakila database. Then issue the Tools | Migrate Data command or press the command on the toolbar. The Data Migration process requires you to connect to the MySQL database and to the SQL Server database again. SSMA then proceeds with the data migration process and displays the Data Migration Reports as shown below. 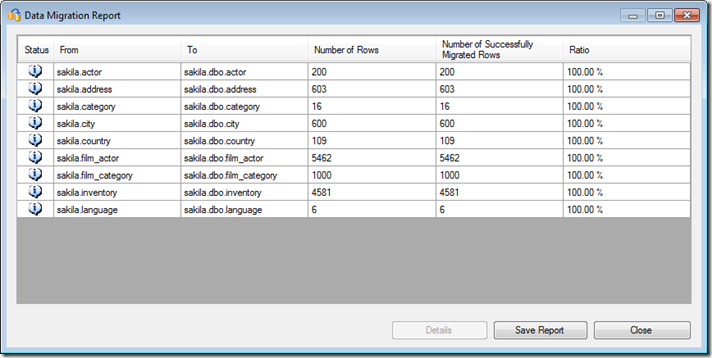 The migrated tables are now ready on the target SQL Server instance. To see the results, launch SQL Server Management Studio (SSMS) and connect using the server name as .\SQLEXPRESS. Expand out the Databases node to see the Sakila database. Expand the out the Sakila database tables and then right click on the actor table and issue the Select Top 1000 Rows command to view the data as shown below. 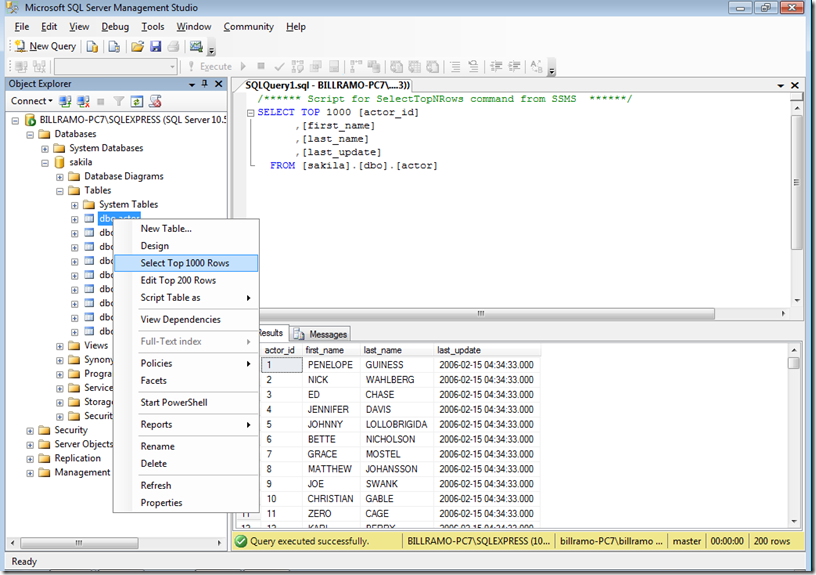 SQL Server Management Studio that is part of the WPI is a free rich Windows client tool from Microsoft that offers a rich development and management experience like  SQLyog and MONyog.