I spend the better part of my work day and a fair bit of my free time in Visual Studio so lately I have been thinking about which ones of the new features boost my productivity the most, so I can spend more time drinking coffee and planning my vacations.

Caveat: some of these are hidden gems from 2013

In this article (part 1) I will list my top 5 new editor features (in no particular order), and in the following ones I’ll list my favorite IDE features and debugging features in VS 2015.

I love code lenses almost as much as I love intellisense.  If you’ve never heard of it before, I am talking about the line that appears above your code telling you things like; who is referencing this piece of code, do my tests for this method fail or pass, who changed this code, what work items did they check in against etc. etc.  Basically anything and everything you want to know about your code, right there in the context of the editor.  It’s a little bit like magic.

And if you want to drill deeper, you simply click on the code lens and you can move directly to the method that referenced this class/method etc.

Code lenses have actually been around since VS 2013 but only in the Ultimate edition, now it is available in both Professional and Enterprise and the number of available code lenses keeps growing.  Read more about code lenses here.

The new lightning fast Roslyn compiler for C# and VB enables some really cool scenarios like live code analysis.  This means that while you type, your code is analyzed and Roslyn comes with these neat light bulb tips suggesting ways to optimize or clean up your code.

You can, if you are so inclined, also write your own special analyzers and code diagnostics to force the people on your team to always start class names with the letter c or whatever floats your boat.

One of the big productivity features in VS 2013 was to get more done without having to switch context.  Like in this case, where I want to know how FromModel is implemented.  I could press F12 and move to the implementation, which would open up the file where it was implemented and switch to that.

Instead here I press Alt+F12 and the FromModel implementation shows up in a peek window, and I can review and edit the code without making the file context switch.

The peek concept has grown in VS2015 and is now used in the break point IDE for example.  But it has also expanded to XAML which gives some major productivity boosts when styling XAML since you can change the style and see the effects of the change in the designer at the same time.

Navigate To (Ctrl+,) – or quick search

When you call a method defined in an interface, like GetCurrentWeatherAsync below, you can’t use “Go To Definition” or “Peek Definition” since it’ll take you to the definition in the interface (IWeatherDataAsync) rather than the implementation.

This is where Navigate To (Crtl+,) comes in handy, it allows you to really quickly navigate between the definitions and implementations of the method. 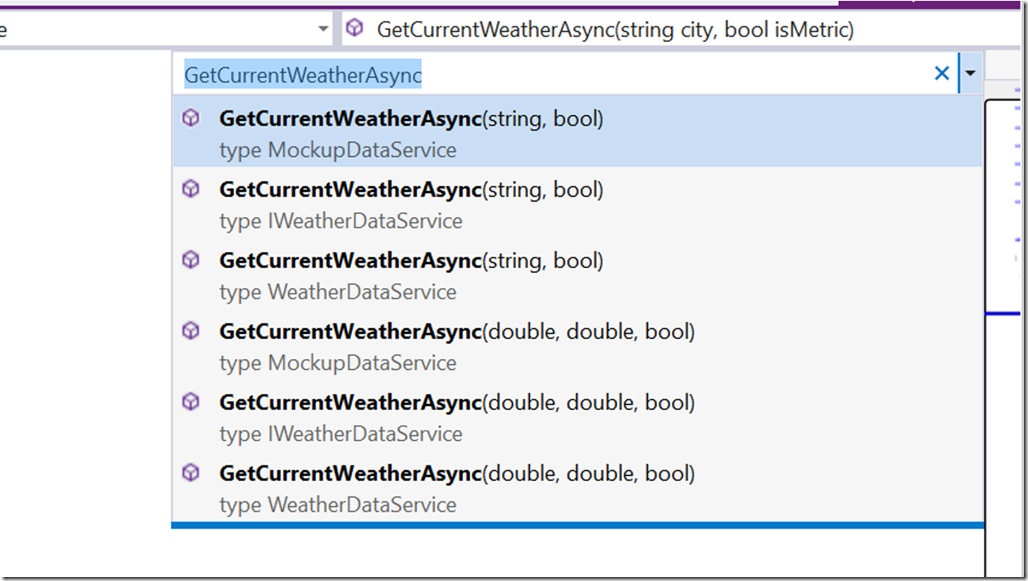 For more shortcuts, check out the VS Tips and Tricks

Intellisense for a lot more scenarios

There is now intellisense for XAML data binding

json (for bower.json and package.json)

and AngularJS directives and attributes and more…

You can read more about the HTML/ASP.NET tooling improvements here

If you feel like this list is bogus because I completely missed the best feature ever, feel free to rant about it in the comments, we are all here to learn new tips and tricks