If you want to do more complex animation like a bee flapping it’s wings or an object exploding you would use a spritemap with different images depicting different stages of the animation and advance the frame each time.  If you want to animate a bee flipping it’s wings you can make this look pretty convincingly by using two images (one with wings up and one with wings down and then toggle between them every 4 frames or so)

In our case, we want the flowers to move downwards at a steady pace.

1. Add a new membervariable to the Column class called Velocity (we’ll make this public so we can modify it easily later, you’ll see why).
The 0.4 here is how many pixels the flowers will move downwards per frame.

2. Add a new method to the Column class called Update where we move all the flowers downwards by changing the Y position

What happens if you take too long to draw?

If you have payed attention you now know that we call Draw and Update 30 times a second, so what would happen if we suddenly take more than our allotted time when we draw or something?

Well, what will happen is that by default XNA will drop draws if it can’t complete the whole Update/Draw cycle in time, so that it can still keep a steady pace.  In this case that would mean that sometimes the flowers would move 0.8px in one go.
In the Game1 Update and Draw functions though you get a parameter GameTime that you can use if you need to do timebased stuff like updating a clock or something.  However, usually for simple games like this one, unless you have a really complex 3D world that you are dealing with, you can get away with a lot of things and still keep the Update/Draw cycle.

Back to our game. If you have followed along your flowers should be moving now, but there are two big problems

First off, we don’t do anything to add new flowers when the flowers are dropping down, and secondly the flowers will just keep moving forever, even off the screen.  What really should happen is that the game should be finito when the flowers reach the bottom.

1. Add a new member variable to the Game1 class

2. In the Update method in the Game1 class change the column update loop to check if the flowers reached the bottom and set the gameOver flag if they have

3. In the column class add a constant for columnBottom and a property called ReachedBottom that checks if the first flower reached the bottom

Now the updates will stop, but nothing else will really happen so we need to print out an endgame message when the game is over

When the game is over we now draw a Game Over message instead of drawing the columns, which is pretty neat.

Ok, so we fixed that, now let’s fix the code so we keep filling up the columns with new flowers as we go along.

In the Column.Update method add the following code to add new flowers when the topmost flower has passed the starting point

Now you should have a fully functioning flower factory and a way to end the game, but no way to win it.  don’t worry we’ll get there… 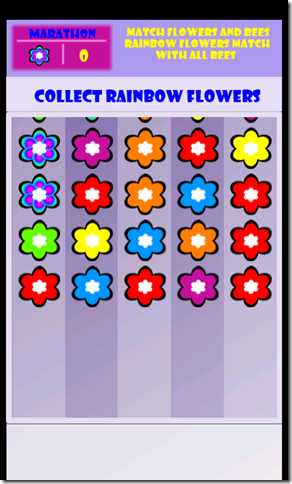