Chris Lovett wrote a tool that takes GCRoot output and transforms it to a DGML document so that you can see the roots of an object in a more visual way, and finally Mohamed Mahmoud went one step further and made a debugger extension that does this for you directly.

The debugger extension is called VGCRoot and you can get the extension, and some instructions and demos for it here.

If you are looking at a memory dump in windbg and try to figure out why your object is still sticking around, collection after collection, you can use the sos extension to run a command called !GCRoot which will give you a textual representation of how your object is rooted.

In other words, it will give you several “stacks” linking your object all the way up to one or more “roots”, where the roots may be threads, static objects, reference counted objects and until you break the chain between the root and your object your object can’t be garbage collected.

With !VGcRoot we can now get all the roots in a DGML file that we can open up in Visual Studio .NET 2010, making this much easier to digest.

You run it from windbg using !vgcroot /do /fields <objectaddress> [<DGML File path>] and the resulting graph (in this case for a Form object) looks like this. 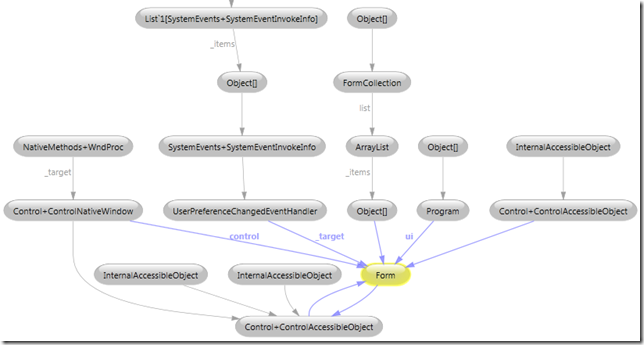 I will probably be showing this off more in context in future memory investigation posts but just wanted to show off the extension so that you can start playing around with it.  Be sure to check out his post to see other stuff you can do with the graph once you have it generated.

Have a good one,

(and thanks to Mohamed for writing the extension)