It’s been a little while in coming, but I’m delighted to announce that we’ve shipped the latest release of Family.Show, our reference application for WPF development. Family.Show started a couple of years ago, when WPF was in its infancy and a few of us were looking for ways to showcase the power of the platform as a way for developers to build beautiful Windows applications. We approached our friends at Vertigo Software with a request to partner with us in building a WPF sample that would be both a beautiful application in its own right as well as a great learning tool for aspiring WPF developers. After experimenting with a few scenarios, we picked genealogy: not only is it one of the most popular hobbies out there, but it’s also a category of application that closely models a number of (rather more boring) enterprise scenarios. 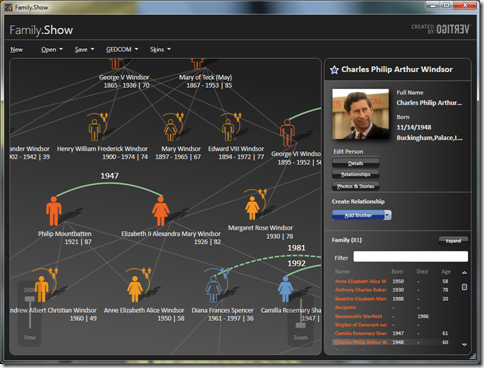 Fast forward to 2009, and it’s been really fun to see how Family.Show has been used as an application. We’ve been approached by authors who use it to track the characters in their fiction novel, it’s been featured in genealogy magazines, and it’s been downloaded many thousands of times by developers all across the world. Since it’s licensed under our most permissive license, you’re welcome to reuse any or all of the code for your own purposes or to take concepts and build them into your own application.

In this third major release, we knew it was time to refresh some of the code to take advantage of the new innovations in the latest releases of WPF (for example, data validation, LINQ, and so on). We’ve also been reading through the feature requests on the Codeplex site and have implemented a number of suggestions to make it an even better tool for general purpose genealogy purposes. (For example, you can now marry your cousin!) We’ve done a lot of work to refactor the code: componentizing several of the controls to make them more easily reusable in other applications. Lastly, we thought it would be great to create a hands-on lab that made it possible for developers to start to experiment with Family.Show and learn WPF using the application.

We’ve put all this together into a new release that we’ve packaged up on Codeplex. Check it out and let us know what you think!

We’re not done – we’re actively working on the v4 release, which will come out relatively quickly and take further advantage of .NET 3.5 SP1. We’re working with a few interested developers from outside Microsoft who are also interested in extending Family.Show – if you have a patch you’d like to submit, we’d warmly encourage you to do so.

Check out Family.Show on Codeplex or indeed on Vertigo’s website, where they have a ClickOnce version of the application ready to go (requires .NET 3.5 or later).