Deploy to Azure via Github

There are additional scripts here on the DSVM GitHub repo for deploying Linux or Windows versions This template uses a Scale set to deploy a single VM low priority.

For example: NC6 (1 K80 GPU) low-priority (preemptible) instance costs $0.18/hour compared to $0.90/hour for a dedicated instance (depending on region).

Please note this template is setup to delete the disks upon eviction. So you want to save any data on the VM externally if you need to, on a blob or Azure files. You can update the template to set eviction policy to “deallocate” to keep the disks (storage costs apply).

The template can be found here on the DSVM GitHub repo if you want to customize it.

Microsoft grants access to their spare capacity in each region. The amount of spare capacity varies by region and VM size according to multiple factors, including day of week, time of day, and demand for different VM sizes.

With low-priority VMs, Microsoft effectively lets you take advantage of unused capacity for a great price. The datacentre team can reclaim these VMs at any given moment due to higher priority allocations so the capacity isn't fixed.

Low-priority VMs can be easily purchased via Azure Batch, a service that lets you run jobs and tasks across multiple compute pools, “Batch pools”.

However a Batch pool is not needed to create a single Virtual Machine such as  DSVM on a Low Priority instance. All you need is a VM Scaleset. The  DSVM Low priority template at the start of the blog creates a VM Scale set does this automatically.

Creating a VM using Low Priority with the Portal 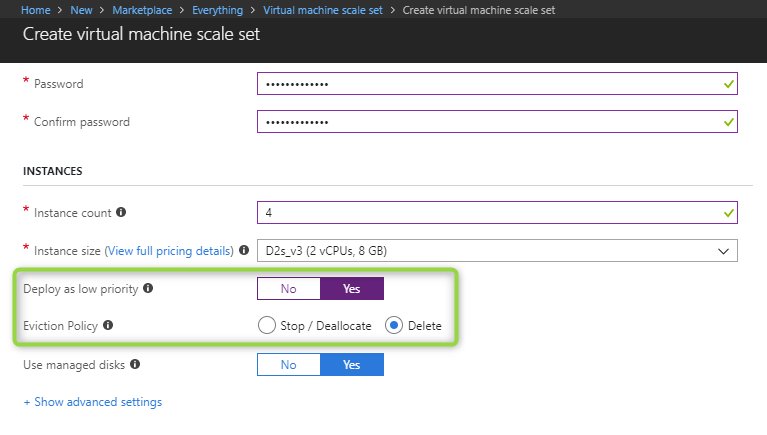 Each Batch pool can contain both on-demand and low-priority nodes which can be independently scaled.

So we have seen many academics keen to use Low-priority VMs to run and scale their course or research infrastructure cost-effectively.

Here are some examples of common use cases that are suitable for Low-priority VMs.

We look forward to helping you to get started and consuming Low-priority VMs on Microsoft Azure and achieve business agility, cost savings, and scale.