I know, PowerShell Version 4.0 has only just landed with us as part of Windows Management Framework 4 and Windows Server 2012 R2 BUt the preview of WMF 5 and PowerShell 5.0 is here already.

So a very quick run through of what is new is in order, I think.

Well – since the Future IS PowerShell, it’s no surprise that a number of new features and functionality are included. Check it out by downloading here

The key new functionality includes updates to PowerShell and the Integrate Scripting Environment as well as Desired State Configuration.

The two I want to concentrate on here though are Network Switch CmdLets and OneGet.

Don’t forget though that if you do install the preview it is not Generally released or supported so the usual caveats apply about not using it in production etc.

Available CmdLets are shown below

Being a preview, the help available is limited for now and attempting to update it results in errors.

OneGet CmdLets available are shown below. 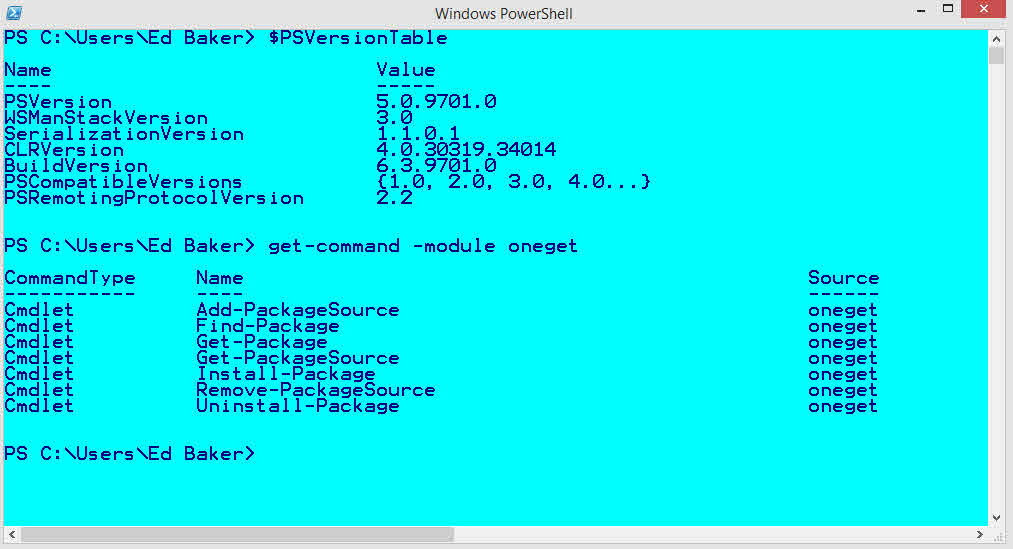 again, help is limited but as an example.

Simply entering Find-package results in a huge list of available software products that can be fetch and installed.

Be aware that changing the default script execution policy will be required.

This results in the following screens

This shows the warning prior to installation

Installation of the application package

Success of the installation

Only a preview but I can’t wait for this to become Generally Available. The potential for being able to control your Network Switches in conjunction with your System Center Virtual Machine Manager is huge!

Deployment of software through this method may not be the future for an enterprise deployment BUT its a seriously fast way of installing applications without as many of the usual multiple steps.