I had a pleasure participating on the European SharePoint Conference 2016 this year with quite a few things also on my own table. I was initially asked to deliver the day 3 developer keynote with fellow SharePoint Patterns and Practices Core team members and after accepting to take care of this, got plenty of additional things on my table as well, since simply don’t know how to say ‘no’. This is pretty much the story of my life, but this was really a fun week and definitely not regretting on accepting additional things as well.

Conference had a keynote for each of the main conference days with slightly different agenda, which worked out well.

Thursday’s keynote was really all around the developer story with SharePoint and where we are heading from a customization perspective. We had roughly 1200 attendees in the room and feedback was really great. Erwin and Paolo are both MVPs and also SharePoint PnP Core team members, so they are really well looped on what we do in engineering. This was also really fun thing to do with the three of us and it was nice to see that regardless of classic momentary network issues, everything went as planned. There’s always room for improvement, but let’s do that with the next setup.

We obviously covered the modern tool chain and and touched on numerous other development areas related on the SharePoint Online and on-premises. Key takeaways from the keynote in general were following:

We also concentrated on the power of community and how everyone from the community can truly influence on the future of SharePoint by sharing their feedback and letting us in the engineering know what works and what doesn’t. Community influence to SharePoint roadmap has never been bigger and we truly want to help you where we can to achieve your business and technical objectives.

You can find used presentation from the SharePoint PnP docs.com section.

We used following basic to-do web part as the sample implementation, which is available from the SharePoint GitHub repository . This sample was implemented by Chaks (Chakkaradeep Chinnakonda Chandran) while back as a reference sample for different client-side web part aspects.

Notice thought that even though we showed SharePoint 2010 in the demo (nerd factor), it has slightly different story than with 2013 and 2016 version, due the differences in the REST API implementation. 2013 and 2016 are pretty similar from the REST API implementation perspective, but in SP2010 you only had pretty limited remote API with listdata.svc based implementation. This means that any work you’ll do in SP2010, would require significant changes from data layer perspective, before it could be moving to newer versions.

Guidance on starting to use modern web development practices with SharePoint on-premises is work in progress. We are targeting to provide generic guidance for SharePoint 2013 and SharePoint 2016 on this model, so that you can more easily adapt the modern tooling. We won’t be targeting SharePoint 2010 with this, due the remote API differences and limitations.

You can see initial status and what was shown in the keynote from following repository: https://github.com/VesaJuvonen/react-app. This is just initial work started with help of Chakkaradeep (Chaks) Chinnakonda Chandran (this is forked from Chaks initial work) and Waldek Mastykarz. Just to repeat the message one more time – this does not mean that SPFx would be landing to SP2013 or SP2010, but you can take advantage of modern web stack tool chain in those platforms as well, which will then make adoption of new platforms easier for you, when you are upgrading to newer versions.

Here’s the modern web stack UI hosted in the SharePoint 2010 platform. This was done with content editor web part (CEWP), which was pointing to a txt file in the site collection with needed script references to JavaScript files hosted from local node.js service as a development experience.

Few weeks back we already got a nice Microsoft Bot Framework submission around the SharePoint Framework client-side web part samples from Gary Pretty. This really got the PnP team thinking around the different opportunities and possibilities with the bots. Objective of the demo was around demonstrating the integration opportunities cross different services in the Office 365 and how you can automate operations using the Microsoft Bot Framework.

In the demo, we used our custom bot called PnP SharePoint Manager in the Microsoft Teams from iPhone with voice. So basically we were able to command our bot to perform operations towards SharePoint Online using different devices and input options.

Notice. If you are interested on this bot framework demo more detailed, you can find a recording of almost identical setup from the PnP Core Special Interest Group recording from 16th of November. You can also jump directly to the demo b using following link: Remote provisioning with Microsoft Bot Framework using Microsoft Teams or SharePoint Framework client-side web part.

We started the ESPC with the pre-day conference around developing SharePoint Framework client-side web parts. This was a fun day together with Mike Ammerlaan (Microsoft) and Eric Overfield (PixelMil). We had roughly 90 attendees in the room and we walkthrough the modern SharePoint development experience together with the audience. Agenda consistent from topics like following.

This year ESPC organized second annual SharePoint Hackathon as part of the conference. This session was hosted by Mike Ammerlaan and was also personally present to help with any questions around topics, which attendees were investigating or hacking. On the picture right , you can see how I concentrated on supporting the attendees in practice

This was by far the best organized hackathon which have ever attended. ESPC organizers had ensured that we had cool swag for the attendees and we had our own waiter from hotel taking care of any requests around drinks or food. We had roughly 25 participants and all were highly committed on building something cool. Hackathon started on Tuesday evening around 6 PM with shared dinner and attendees or their teams where expected to submit their results as a video by Thursday morning 10 AM.

Winner team members were Andi Krüger and StephanKitzler-Walli. Guys demonstrated how to host and build SharePoint Framework style implementations in the on-premises using both farm solutions and add-in model as the underlying technique. Demonstration was really impressive and there was clearly a lot of time spent on making things happen.

I also had one classic session to delivery by myself during the conference. This was around my not to use Feature Framework in SharePoint deployments for deploying assets or configurations to SharePoint sites. Key pointers of that session are following and you can also find slides for that below.

Would also like to thank the ESPC organizers on extremely well managed conference and also on the great speaker gifts. Each speaker got their very own personalized Lego figure. Here’s me, Erwin van Hunen and Markus Hintner hanging in the bar. 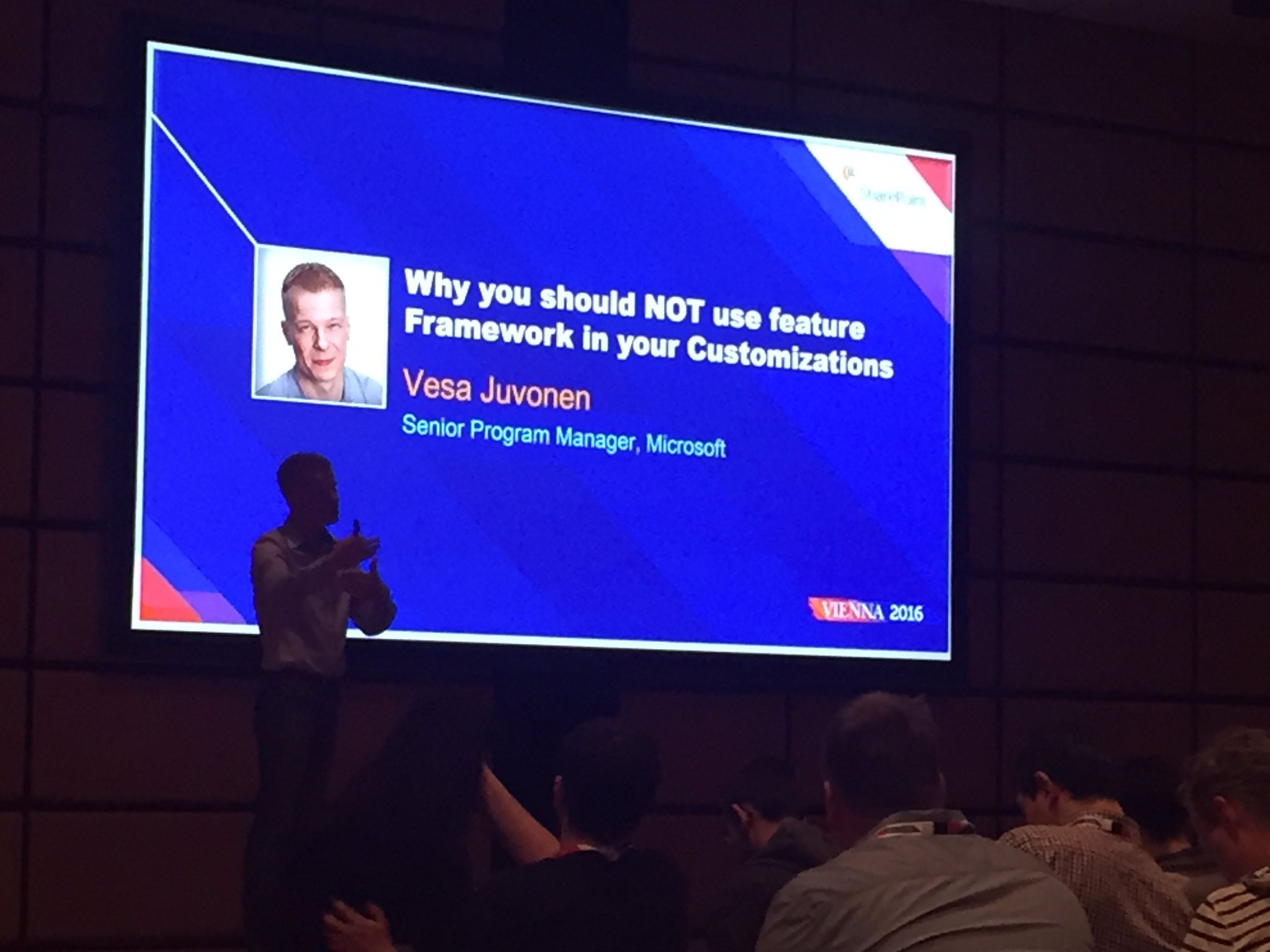