How to Update Certificates for AD FS

How to Update Certificates for AD FS

Replacing the SSL Certificate for an AD FS farm

Normally the SSL certificate for the AD FS farm comes from a trusted third-party CA, like DigiCert or Verisign. This is a traditional SSL cert like you would use in IIS for any secure web server. You may use a Single-name, subject alternative name (SAN), or wildcard cert for this purpose as long as it's valid and trusted by internal and external AD FS clients. You can find more information about the certificate requirements here.

You can perform the whole operation of updating SSL certificate for the AD FS farm across all federation and Web Application Proxy (WAP) servers in three simple steps: 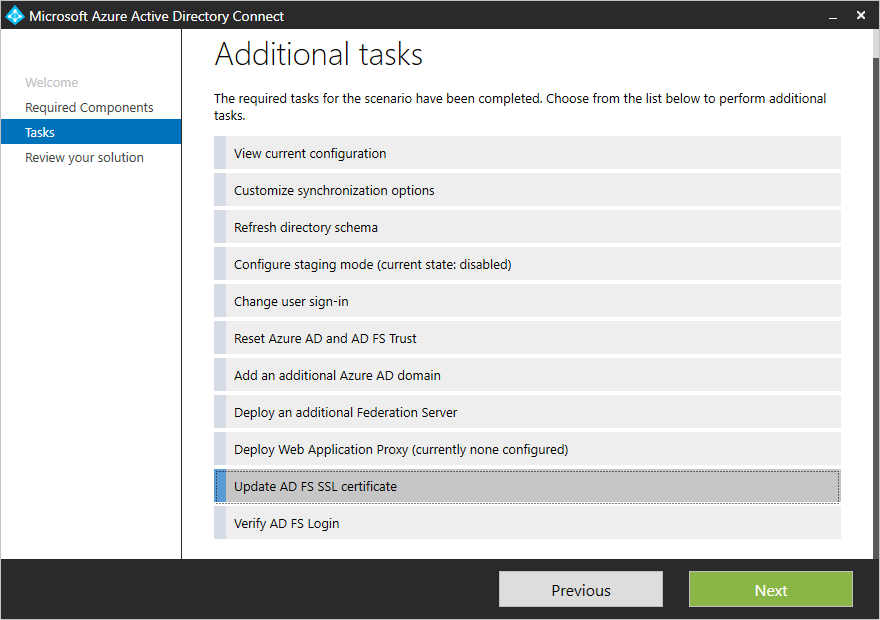 You can modify the list of servers that are displayed by adding or removing the servers to reflect the current configuration of the AD FS farm. As soon as the server information is provided, Azure AD Connect displays the connectivity and current SSL certificate status. 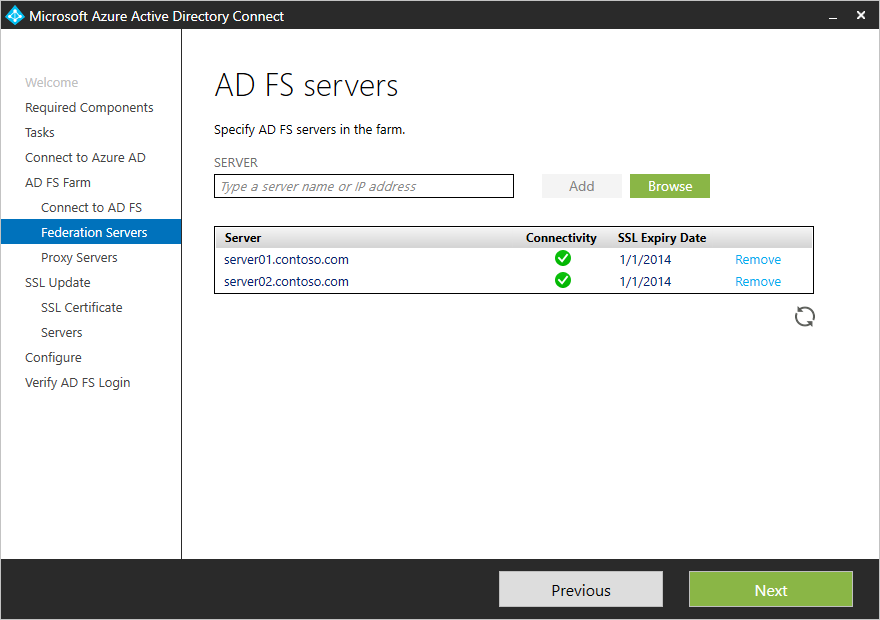 If the list contains a server that's no longer part of the AD FS farm, click Remove to delete the server from the list of servers in your AD FS farm. 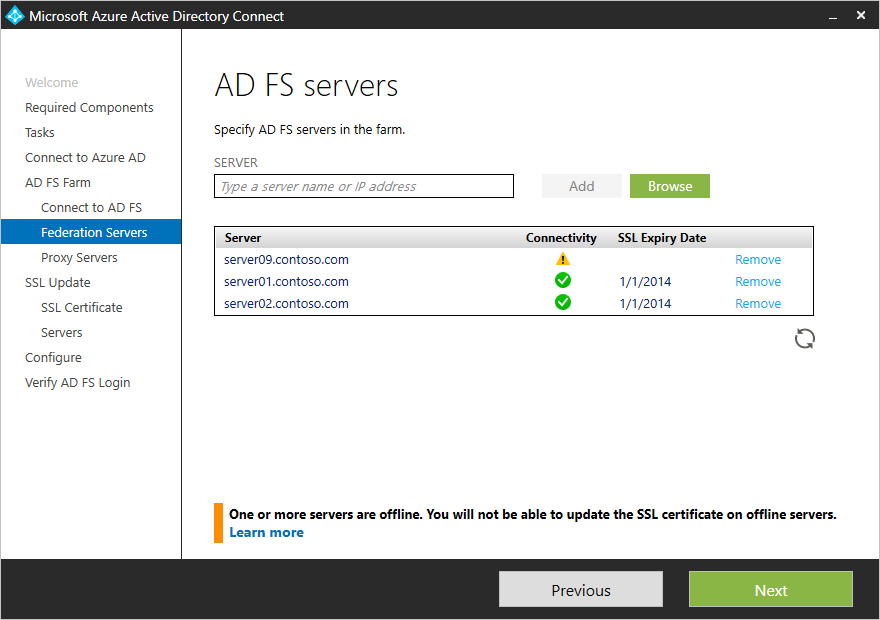 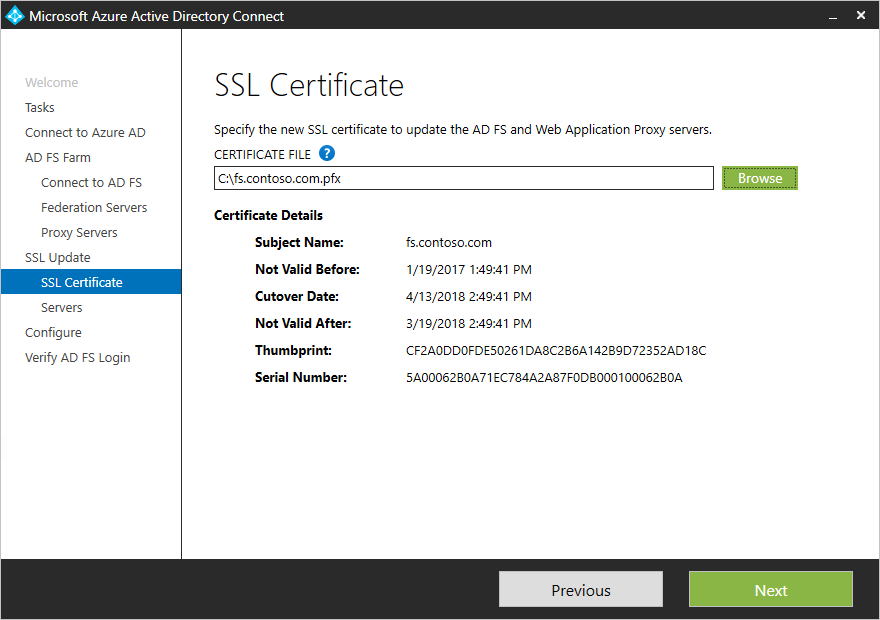 Step 3: Select servers for the update

In the next step, select the servers that need to have the SSL certificate updated. Servers that are offline can't be selected for the update. 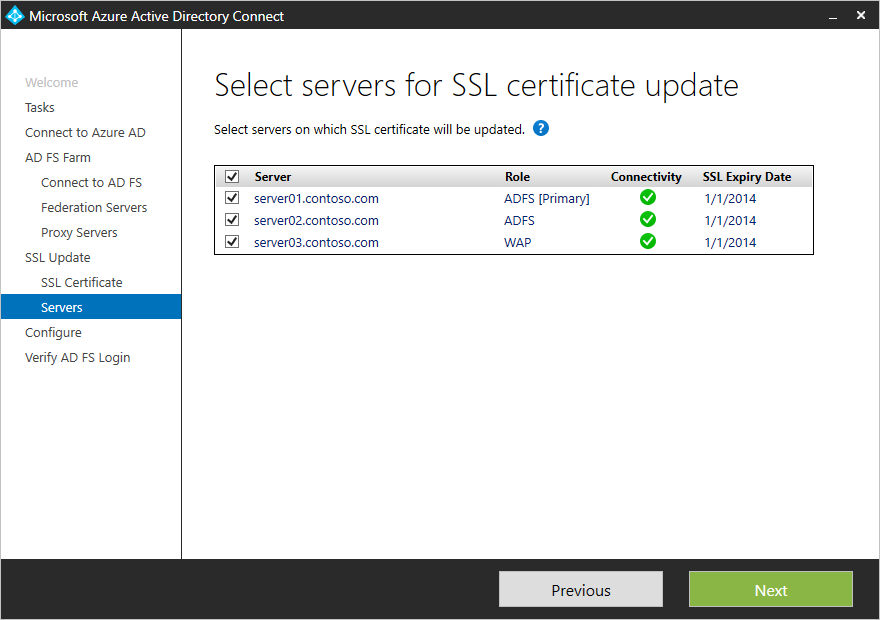 After you complete the configuration, Azure AD Connect displays the message that indicates the status of the update and provides an option to verify the AD FS sign-in. 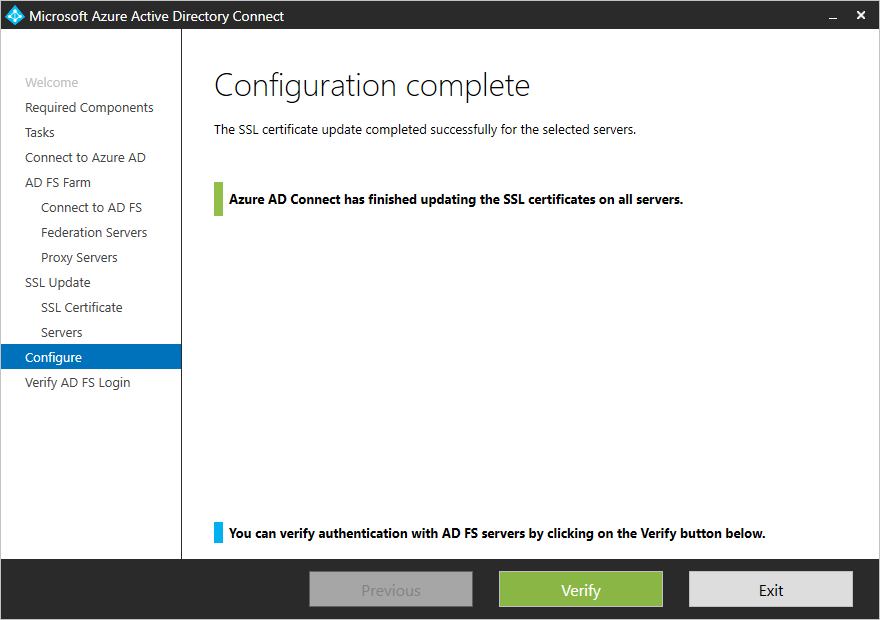 The Token-Signing and Token-Decrypting certificates are normally self-signed certificates good for one year, dated from the time the primary AD FS server was installed. The Office 365 portal will warn you when these certs are about to expire and that user access to all Office 365 services will fail.

By default, Token-Signing and Token-Decrypting Certificates will expire one year after your ADFS was setup. Near to the expiration period you will get the following notification on your Portal Admin Page.

This notification does not apply to SSL Certificate, also known as Service Communications Certificate.

The number of days represents the day where the service will stop. Due to certificate change.

How to calculate the effective day:

The new Certificate will be generated 20 days before the certificate expirations date:

The new certificate will be promoted to Primary after 5 days:

This is not true if the Relying party has been updated on the 5 days that exist between the new certificate creation and the promotion.

New certificate will be created on 10-01-1014 and will be marked as Secondary [20 days before expiration].

On the 15-01-2014 the Secondary Certificate is promoted to Primary [5 days after new certificate generation].

If we see the message on the portal on the day 05-01-2014 this should be informing that the service will stop in 10 days, if federation metadata information is not updated.

If you did not change this value from “True” to “False”, no renewal operation regarding token certificates is needed, this will happen automatically based on triggers explained below.

The Rollover interval is checked by the AD FS service every 720 minutes (12 hours).

If the existing primary certificate (Token Signing or Token Decryption) expiration time is within the window of the CertificateGenerationThreshold value (20 days), then a new certificate is generated and configured as the secondary certificate.

Once the Promotion event has occurred, the Token Service will sign/encrypt all issued tokens with the new primary certificate.

This does not cause a service outage of AD FS 2.0, but an application issue when the token is received and signed with something other than the expected certificate. This is true for O365 or any other application.

With AutoCertificateRollover enabled, AD FS 2.0 will continue to function as expected.

To validate your configuration, connect to your primary ADFS Server and follow these PowerShell instructions:

CertificateCriticalThreshold: 2 - Days prior to expiry of the certificate before a new certificate is generated and promoted if AutoCertificateRollover has not performed naturally.

CertificateGenerationThreshold: 20 - Days before expiration of current primary a new certificate will be generated.

CertficatePromotionThreshold: 5 - Days the newly generated certificate will exist before being promoted from secondary to primary.

CertificateRolloverInterval: 720 - Interval in minutes at which we check to see if a new certificate needs to be generated.

To have single sign on with ADFS the federation certificates need to be updated with the online platform. O365 is now automatically pulling the certificates from the AD FS server via the public metadata endpoint on a regular basis.

You may need to manually update the federation metadata using the PowerShell in complement to the Microsoft pull mechanism, as this will not pull the certificates on all scenarios.

How to Enable and Immediately Use AutoCertificateRollover

If you have turned off AutoCertificateRollover in the past and you want to turn it back on, there are a few things you need to consider

if you decide to let the existing certificates hit the critical threshold instead of invoking the certificate generation process, then you only need to re-enable AutoCertificateRollover.

If you decide that you want to immediately generate new self-signed certificates, then you need to first re-enable AutoCertificateRollover and then issue a PowerShell command to invoke immediate certificate generation.

NOTE: Be aware that there is an AD FS service outage incurred when the Token-Decrypting or Token-Signing certificates are updated because the relaying parties must update their configuration to expect the new certs. Do this work when users are least impacted by the outage.

Before you renew the Token-Signing and Token-Decrypting certificates I recommend that you increase the AD FS certificate lifetime for self-signed certs.

A Note About WAP Servers

If your organization uses Windows Application Proxy (WAP) servers for your AD FS deployment, there's nothing else you need to do regarding Token-Signing and Token-Decrypting certificates. WAP servers only use the Service Communications SSL cert.