You’ve probably seen Donovan’s definition of DevOps and the associated sticker by now. While reviewing the where are we in Donovan’s [from 0 to DevOps] world post, I asked Donovan which seven (7) points we should tattoo on our forearms to guide us with DevOps transformations.

Here’s the list he gave me, with overviews and links for more details:

“Infrastructure as Code (IaC) is the management of infrastructure (networks, virtual machines, load balancers, and connection topology) in a descriptive model, using the same versioning as DevOps team uses for source code. Like the principle that the same source code generates the same binary, an IaC model generate s the same environment every time it is applied.” - Sam Guckenheimer, what-is-infrastructure-as-code

“Continuous Integration (CI) is the process of automating the build and testing of code every time a team member commits changes to version control. CI encourages developers to share their code and unit tests by merging their changes into a shared version control repository after every small task completion. Committing code triggers an automated build system to grab the latest code from the shared repository and to build, test, and validate the full master branch (also known as the trunk or main).” - Sam Guckenheimer, what-is-continuous-integration

“Whether your app is on-premises or in the cloud, you can automate build-deploy-test workflows and choose the technologies and frameworks, then test your changes continuously in a fast, scalable, and efficient manner.” - continuous-testing/continuous-testing

“Continuous Delivery (CD) is the process to build, test, configure and deploy from a build to a production environment. Multiple testing or staging environments create a Release Pipeline to automate the creation of infrastructure and deployment of a new. Successive environments support progressively longer-running activities of integration, load, and user acceptance testing. Continuous Integration starts the CD process and the pipeline stages each successive environment the next upon successful completion of tests.” - Sam Guckenheimer, continuous-delivery

“Support a rapid release cadence and manage simultaneous releases. Set up release definitions that represent your environments from development to production. Run automations to deploy your app to each environment. Add approvers to sign off that the app has been successfully deployed in an environment. Create your release manually or automatically from a build. Then track your releases as they are deployed to various environments.” - release/overview

“Performance test your code with hundreds of thousands of users.” - performance-testing

“Virtual machine scale sets are an Azure Compute resource you can use to deploy and manage a set of identical VMs. With all VMs configured the same, VM scale sets are designed to support true autoscale – no pre-provisioning of VMs is required – and as such makes it easier to build large-scale services targeting big compute, big data, and containerized workloads. For applications that need to scale compute resources out and in, scale operations are implicitly balanced across fault and update domains.” - scale-sets-overview

Which brings us back to the question we wanted to ask

Should we create more stickers …

… or a temporary tattoo for the next DevOps meetup? 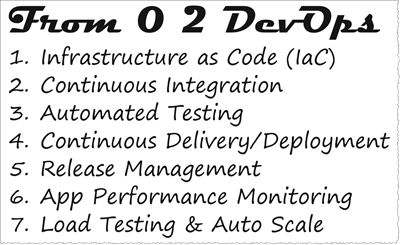