What is in the latest releases of the VSTS extension generator?

We’re pleased to announce another update for the yeoman generator-team-services-extension, delivering new features, template improvements, and improvements to your CI/CD pipelines.

Here’s a quick snapshot of the team that implemented the innovations covered herein:

Remember to bookmark aka.ms/vsarreleases, which summaries all of the feature and issue updates for this and other solutions. Here’s a summary of what’s changed after v1.0.33:

Commit 15e5a57 included with v1.0.44 simplified the integration with Team Services build. It introduced the gulpfile.js, which looks for the coverage report in ./coverage/ and outputs the version with inlined sources to ./lcov-report-inline.

Another piece of magic in the commit ensures that the above script is executed as part of the test script.

In the CI build of our pipeline, we simply have to update the Report Directory path to reference the script output path.

Voila, after running the build, we now get this code neat coverage report: 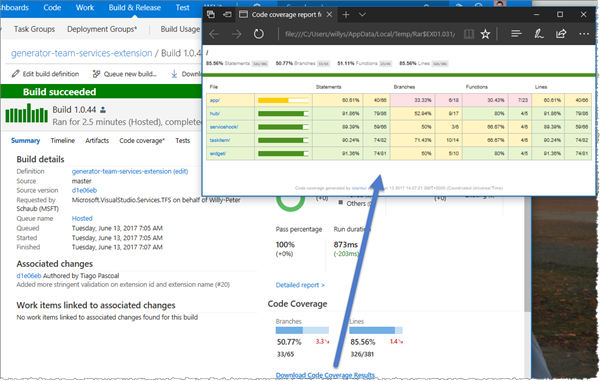 Now that the team has worked through the backlog, the generator project enters a maintenance phase. We’ll respond to issues, capture (not action) ideas on our backlog, and likely continue to tweak the generator. We’re also monitoring the repo for your pull requests. Please get engaged with the team and share your ideas and updates with the rest of the community.

What do YOU think?

We need your feedback! Here are some ways to connect with us: