In this  blog post I  will go thought the operating system deployment process with PXE boot step by step.  Since this scenario includes many technologies,  troubleshooting the  problems   takes some extra effort. I’ll try to show and examine all the technologies involved.

Process steps for the PXE boot is  as follows

To test the PXE boot I have created a test task sequence and deployed it to All Unknown Computers collection with the following settings; 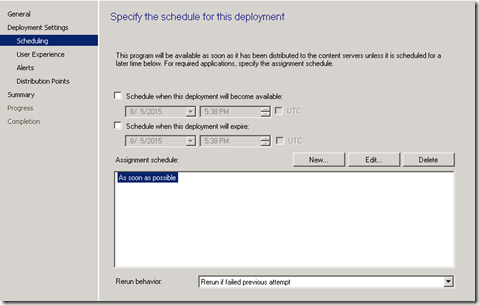 We first need to check references to see if anything is missing from the Distribution points.  Missing packages will cause task sequence to fail .

In order to use PXE boot you need to enable this option from the BIOS of the computer. After enabling each vendor uses their own way of initiating the network boot. Most of the time its started either by pressing F12   or choosing network boot from the boot options.

Tools to use : Microsoft Network Monitor (MNM) or any other network package capture tool

To use  MNM   download the latest version and install it on the DHCP server. After the setup you need to  go to New Capture  and click Capture Settings 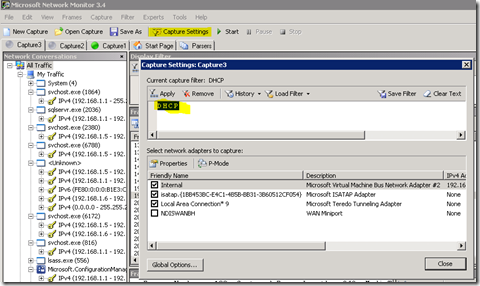 Here we are only interested in DHCP traffic so we will specify DHCP  as protocol in filter page and click apply. As

next step we will start the network capture and try to boot the client using PXE.

Client initiates the network boot. Here note the Mac address of the client as it will help us to track the request from the client.

First broadcast package shows up the mac address of the PXE client ; 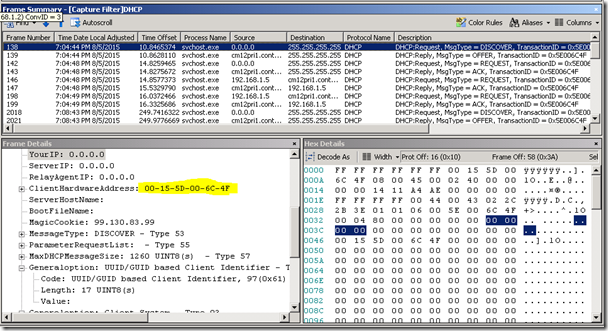 If you don’t see this package this means broadcast messages are not  reaching the PXE server  so  you need to inspect the network devices in between your client and DHCP server.  Most probable cause  would be the switch cl’ent connected to don’t have the IPhelper setup .

After the broadcast received  CMPRi12 ( my DHCP server) replies and finally client gets the 192.168.1.5  ip address. If you inspect the reply message from DHCP  it also includes the Boot server and Boot file name ; 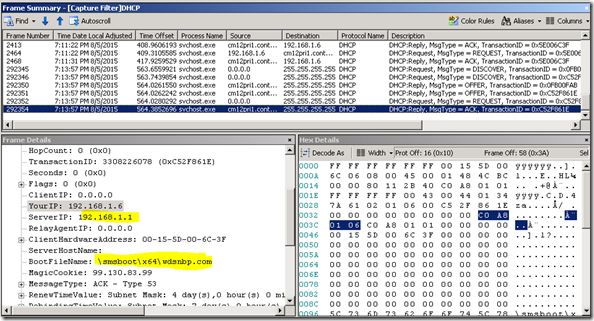 In order DHCP to work you need some configuration on the server side.  First DHCP server should be authorized and should have a scope, firewall should not block DHCP traffic.  Also we need to configure the following options for PXE boot

Option 66 Boot server : This is the PXE server   your ConfigMgr DP with PXE role

Option 60 PXEClient : PXEClient . You only need this if your PXE server and DHCP server is collocated. Since this is quite unlikely for a production environment  most of the time you wont need to configure this setting.

At this point we will switch to ConfigMgr DP  and look at the SMSPXE.log

Here I see my MAC address contacting  to the PXE server  but its not serviced. We got a warning message saying Architecture boot image  not found.

This message means PXE server does not have the required boot image available. You need to go to ConfigMgr console and Boot image properties. Under datasource enable  Deploy this boot image from the PXE enabled distribution point After enabling this when PXE provide loads you will see your boot images (CAS00003.wim and CAS00004.wim in my environment) available in PXE

Option 1 - machine is not in the ConfigMgr database and  boot  images are deployed to PXE . 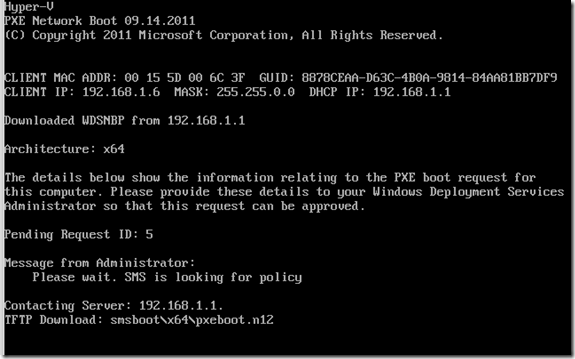 Here we can again see  00:15:5D:00:6C:4F   our client  has contacted to PXE  server and  after checking we can see device is not in the database . We can also see that   advertisement CAS20001 will be used to deploy the client.

If you check the network trace of your PXE server you can see the TFTP traffic while downloading the boot image . You can capture this traffic by using  TFTP  as a capture filter.

Option 2 - If you try PXe boot  with a machine already registered in  ConfigMgr database  you will see that machine  will not be serviced by PXE.

Option 3 - If  the machine is serviced   before but  deployment  breaks before complementing  you will  see that machine will not be serviced by PXE.

As you can see machine is unknown but still will not be serviced. PXE has an internal protection mechanism to protect computers from being re-imaged   so when a computer is  serviced a record is being created in ConfigMgr database indicating the date and time it was serviced by PXE.

In both conditions that device will not be serviced by PXE component  until we clear this flag.  You can see the list of computers already serviced by  running the following query  in ConfigMgr database.

To clear this flag ;

After downloading the  boot image , client will boot into  Win PE and  will start the required advertisement. 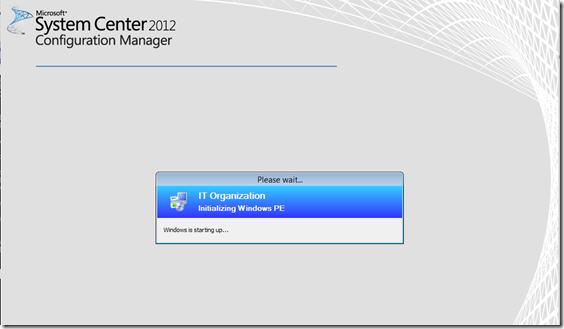 If you receive any problems at this point SMSTS.log is your friend. You should enable command line support on the boot image and  open a cmd by pressing F8 then  check the SMSTS.log   for further troubleshooting.