Now that Visual Studio Team System 2010 Beta 1 is released, let’s talk about some of the cool features it has in test area.  We will start with taking about the ability to easily create actionable bugs:

Create actionable bugs: The problem of no-repro is a big issue between developers & testers. Testers spend enormous amount of time finding and reporting a bug, but many of the bugs are rejected by developers because the information in the bug report is not comprehensive enough, or they can’t reproduce the bugs on their systems. Microsoft Test and Lab Manager (MTLM) goes a long way in solving this problem. Let us see how:

Once you create a manual test case  in Microsoft Test and Lab manager, you can run it.  Test case(s) will be loaded in Test Runner activity of MTLM.  Start by clicking on “Start Test”.

You can follow the steps defined in the test case to test the your Application Under Test (AUT). As you test your app, mark the step in Test Runner as “Pass” as appropriate.  Once you find an issue in the application under test, mark the step as “Fail”.

At this point testers normally open the bug form and start typing the repro steps etc.  However, as you are using the Microsoft Test and Lab Manager, let’s see how it makes your job easy.  In the bottom pane of the Test Runner, add any comments about the issue you found while testing this step.  Now let’s attach a screenshot to prove that you have actually seen the issue.  From the Test Steps tool bar, click on the camera icon & take a snapshot of the AUT (you can take a screenshot of the rectangular area/window/complete screen).  The screenshot gets automatically attached to the step.

Now let us submit the bug.  Click on the New bug button on the toolbar.

It opens up a TFS bug form.  Notice that some of the required fields are automatically filled for you.  Also in the bottom tab of the bug form repro steps have been captured (including information about what steps you had passed/failed). Any comments/screenshots are also attached to the step.

The second column has detailed actions, open any section & see that it has captured detailed user actions (yes each and every UI action).  If you had configured video recording in test settings, you will see video links for every action in third column.  Now the developer can see exactly what was done in the application before the bug was found.

The System info tab has automatically collected information about the system on which you were running the app. 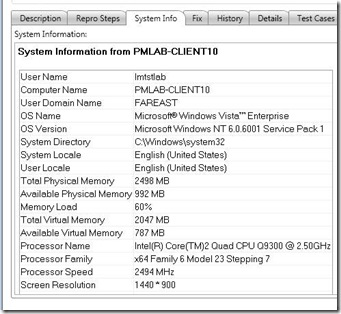 The test case tab has a link that has been automatically created between this bug & the test case.

The “Other links” tab has many other useful links (depending on the test settings).  E.g. it has the links to the action log file, video of testing, historical debugging log, event log etc.

You can add title to the bug and save it.  That’s it; you have created a rich actionable bug and the chances are that it won’t come back to you as non-repro.