I’m pleased to announce a major update to the Test Scribe power tool currently available in the Visual Studio Gallery.  Test Scribe is a documentation tool designed to construct documents directly from the TFS and TCM operational stores for the purpose of discussion, hand-off, etc.  For the newest release of the Test Scribe tool, we have moved into the Microsoft® Test Manager shell and more in-context with the types of documents offered with the tool.  The newest release of Test Scribe is compatible with Microsoft® Visual Studio 2010 but does require either the Test Professional or Ultimate editions already be installed.

If you have already installed Visual Studio 2010 Test Professional you will need to install the Team Foundation Explorer edition on the machine in order to generate documents using Test Scribe.  You can find the Team Foundation Explorer installer on the Visual Studio 2010 Test Professional installation menu. 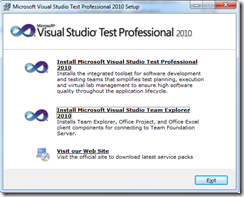 You can download the newest release of Test Scribe here.