Now that we have discussed some of the underpinnings of query expressions, we can turn our attention to how to use them. As has already discussed, most people who see query expressions immediately think of SQL and often even mistake query expressions for embedded SQL.  While it is true that there is a similarity in the syntax, it has already been pointed out that they are fundamentally different in important ways.  Because of their semantic difference and syntactic similarity they seem to cause somewhat of a cognitive dissonance with respect to SQL.  In other words, people see query expressions and assume that they behave exactly like SQL.  With some providers (LINQ to SQL) this may be largely true, but with others they are very different (LINQ to objects).  In this post, we will examine the syntax and scoping rules of query expressions.

fromClause -> from variable in source

Here is an example:

from c in customers

Unlike SQL, C# queries do not begin with a select clause.  The primary motivation for having the from clause come first is because in C# variables are always declared before they are used.  So when c is used in the where clause, it is obvious that this c was introduced before it (in the from clause).  One benefit of having a strongly typed language that declares variables before they are used is that IDEs can provide intellisense for these variables when they are used.  Other reasons for the differing order of clauses will be discussed in the next post. 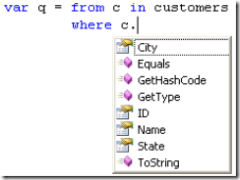 Based on the syntax and translation rules of query expressions and those of transparent identifiers, it is possible to derive the scoping rules for queries.  Mostly these scoping rules are somewhat intuitive, but there are a few places where you might not get what you expect.  To discuss the scoping of rules effectively, it is helpful to introduce a few formalisms.  We can think of each query clause as a function that takes a scope as input and produces a scope as output.  So for example, if s represents the set of variables that were introduced in this query's previous clauses and are still in scope and o represents the set of variables that are in scope from outside of the query then after the from clause all the variables in s and o are in scope as well as the variable that the from clause introduced.  Also, in the source expression in the from clause both the variables from o and from s are in scope but x is not in scope.  We will denote this as:

Again, the spec does not call out these scoping rules.  They are an emergent behavior given the rewrite rules and the rules for transparent identifiers.

In the previous section you may have noticed that query continuations (into variable ...) erase all of the variables that were in scope in the query.  This is because query continuations take the result of a query and pipe it in to the next query.  Looking at the translation rules, we see that a query like:

from x in foo

from y in from x in foo

The key here is that we can divide a query into a series of sections where each section ends in either a select or a group by.  Each section can be considered independently.  For example, instead of thinking of the query as the rewrite indicates, we could think of it as:

Notice how each section of the query becomes one query and then is used as the source for the next query section.  The difference between this "rewrite" and the specified rewrite is that the specified rewrite produces a single expression while this "rewrite" produces several statements.  So while this is not the actual translation, it is helpful in understanding how query continuations work.