The MTP Simulator implements all MTP device capabilities, object properties, and operations that are based on the MTP Specification along with the major features in Windows 7. Additionally, the MTP Simulator also supports Device Stage and loading customizable device profiles.

Where to get the MTP Simulator

The MTP Device Simulator is installed as part of the Windows 7 Portable Device Enabling Kit for MTP (DEK). Before running the simulator for the first time, you may need to install the Device Simulation Framework (DSF).

Once DSF is installed, you can launch the MTP Simulator from C:\WindowsDEK\Tools\MTP Device Simulator\MTPSimUI.exe. Select your desired transport, and click “Connect” to launch an instance of the MTP Simulator. The next section gives an overview of the User Interface. 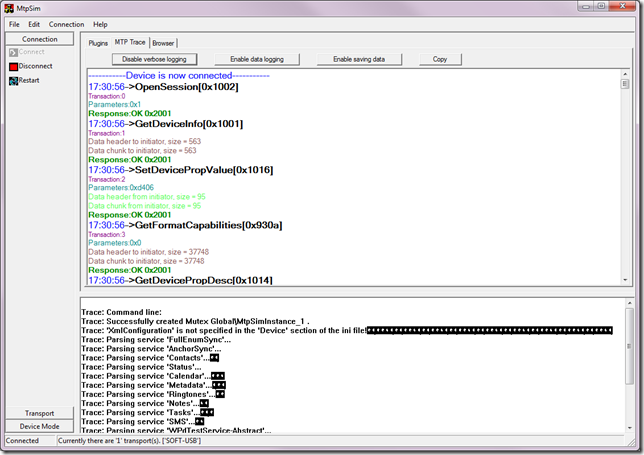 In addition to the GUI, you can control MTP Simulator at startup by using command-line parameters. This can be useful when you need to perform automated testing. For details, see Appendix C from the MTP Device Simulator User Guide.

The Services.xml file enables you to specify configurations that are related to device services, including service-supported formats, methods, and events.

The MTP Device Simulator User Guide in the Documentation for the Device Enabling Kit contains more information on the features described above.

If you have general questions about the MTP Simulator contact AskMTP at Microsoft dot com.

This posting is provided "AS IS" with no warranties and confers no rights.