DigiFlare has released the beta of a new WPF application called DigiTweet. DigiTweet is a desktop application for users of Twitter. The application is built completely using .NET technologies and takes particular advantage of the power of WPF (Windows Presentation Foundation) which is the part of .NET that enables developers to build powerful user experiences on Windows. Additionally, DigiTweet will be implementing several Windows 7 specific features in the coming weeks. You can download and experiment with DigiTweet at https://www.digitweet.com and please visit the DigiTweet website in the coming weeks as some fantastic new features come online. DigiFlare has also released all the source code and assets so developers around the world can learn how to light up their applications for Windows Vista and Windows 7. 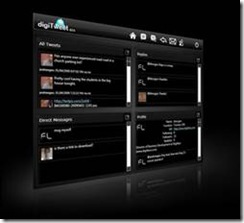 Here are some of the current and upcoming features of DigiTweet:

- Plus A bunch of other secret features in development!