Posted on behalf of Nick Judge.

This post discusses pico processes, the foundation of WSL.  It explains how pico processes work in Windows and goes into the history of how they came to be, the abstractions we decided to implement and the various use cases beyond WSL that emerged. Armed with this context, the next series of posts will dive into specific areas of how exactly WSL works.

The pico process concept originated in MSR as part of the Drawbridge project. A goal of this project was to implement a lightweight way to run an application in an isolated environment, with the application’s OS dependencies decoupled from the underlying host OS (e.g., XP application running on Windows 10).  Normally, this would be done by running the application and OS in a virtual machine, but this comes with significant resource overhead. Instead, the Drawbridge project aimed to run the target application and OS entirely within the user-mode address space of a single process on the host OS. With its reduced overhead, when compared to a VM, this approach allows for greater density of application workloads on a single host while still providing much of the same isolation and compatibility guarantees. Check out the official Drawbridge project page for more detailed information for how they pulled this off.

In Drawbridge, the “library OS” was the target OS of the application workload.  To support a library OS that differs from the underlying host OS in addition to running the library OS in user-mode, the MSR folks needed the host OS to get out of the way and stop trying to manage the user-mode address space inside this process. They coined this type of process a “pico process” on the host side to indicate that it is a smaller version of a normal host process. A kernel-mode driver was responsible for supporting the pico process and acting as the broker between the host OS kernel and the library OS in user-mode.

Of course, proper support for this on top of a publicly released and supported version of Windows would require core Windows kernel changes to add the facilities necessary for pico processes. The MSR team brought this idea to us over in the kernel team toward the beginning of 2013, and we all agreed it would be great feature to add. In fact, we realized that this approach aligned well with some internal discussion we had been having around longer-term strategy to bring back the idea of subsystems to facilitate future architectural changes within Windows. This initial support for pico processes first appeared in Windows 8.1 and Windows Server 2012R2 but was limited to Drawbridge. Pico process support was later expanded to other Windows features.

As we started implementing official support for pico processes, we decided to split the abstraction into two layers: 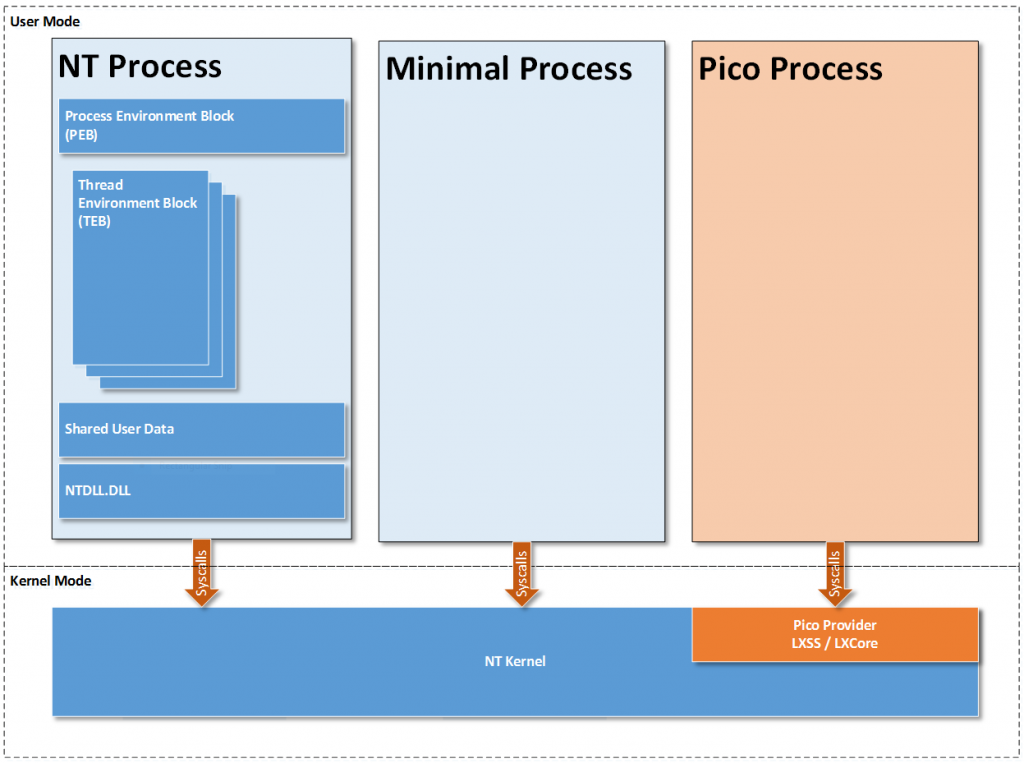 While the Windows kernel does not actively manage a minimal process, it still provides all of the underlying OS support you would expect – thread scheduling, memory management, etc.

You may be wondering – why did we separate the notion of “minimal” and “pico” processes? The idea of an empty minimal process seemed useful on its own, separate from anything related to supporting a pico process. While we had nothing specific in mind around this time back in 2013, eventually a couple of scenarios did surface in Windows 10 that are now using minimal processes directly:

Regardless of what behaviors and abstractions the pico provider exposes to user-mode, it ultimately will rely on the Windows kernel for underlying support of thread scheduling, memory management and I/O. Of course, portions of the Windows kernel had to be updated to support new scenarios where needed.

Later posts will detail the Windows kernel changes in more detail, but here is a quick sampling: