Some customers have indicated that some update files are not being downloaded by WSUS after approval, which results in those updates being unavailable to clients.

For an update to be offered to clients, the following needs to happen:

Check if WSUS is configured to store content locally

The setting is controlled by a checkbox in the WSUS console. 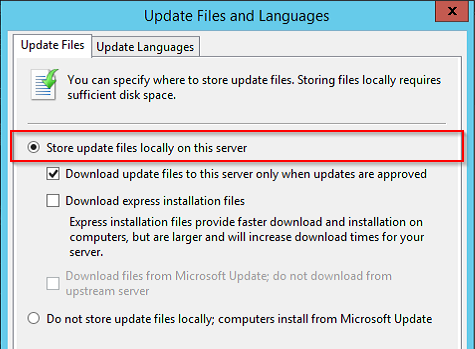 When this is selected, if the update files fail to download to WSUS, the update will not be offered to Clients even though it has been approved.

Troubleshooting when WSUS is configured to store content locally

If files are missing because the update has been declined and Cleanup Wizard has deleted the files from USS; proceed to decline the update from the DSS as well.

Note that in a WSUS hierarchy the Cleanup Wizard is recommended to be run from the bottom to the top in order to avoid DSS requesting updates that are no longer available on the USS.

Instructions for using the Server Cleanup Wizard are available on TechNet.

If files are missing because somehow they got deleted (not through WSUS Clean Up wizard); run Reset on USS and after files are available, retry the download of the files from the DSS. Please note that resetting a WSUS server can be a time consuming operation, as the reset happens for all the updates.

In order to run Reset, run the following command as an administrator:
%SystemDrive%\Program Files\Update Services\Tools\WsusUtil.exe reset