Recently, I am working on a request to check the possibility to use SQL Server as Powershell DSC Pull Server's backend. As DSC server supports both of ESENT DB and MDB which is connected by OleDB provider, I plan to use OleDB to connect my SQL Server as well. While, after everything configured, I got error to register the client node by the below error.

The error can't give me much hint while after some troubleshooting, I am able to make sure SQL Server is not supported by DSC Pull server via OleDB provider. Yeah, there is no typo mistake here :). I understand 3rd software is always difficult to make troubleshooting (yeah, I am in Microsoft, but not DSC developer, so it is 3rd part to me as well) while sometimes there is really requirement for us to make it. In this blog, I will cover my normal approach to debug a 3rd software.

Similar to devices.mdb's design, I have used the below schema to define the related tables in SQL Server:

In order to connect Pull Server to the SQL Server instead of devices.mdb, I have changed the connection string in web.config shown below. You can find it it in C:\inetpub\wwwrootPSDSCPullServer\web.config

Though the Powershell error in client node can't tell me any detail information of the root cause, I believe the issue is inside the Pull server side. Considering the server is running inside IIS w3wp worker process, I would like to begin with ProcDump which is one of my favorite tools. Download and extract it to the pull server machine and execute command "procdump -e 1 -f "" w3wp.exe". This command will show all the exceptions happened in the cmd console shown below. 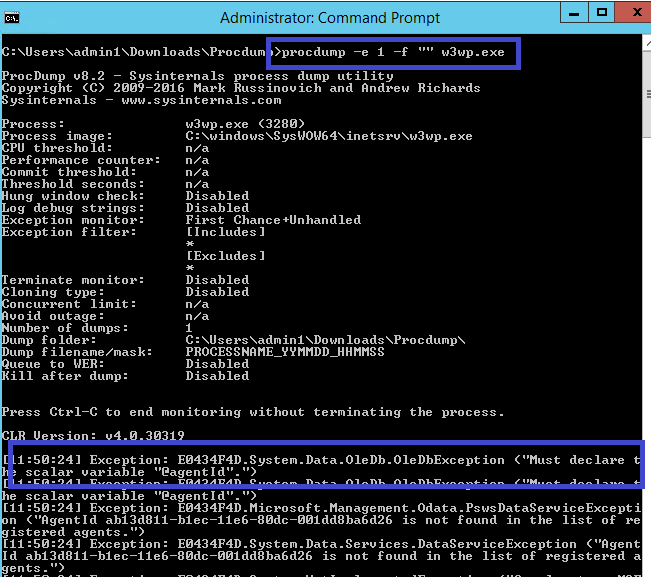 We can clearly see there is an OleDbException complaining "Must declare the scalar variable "@agentId"". This information is still not enough while I am sure it is just something related to the issue, after all I am fighting with the database, right?

So far, what I can confirm is there is really OleDbException blocking the client register, I need dig in more. I plan to capture a dump by command "procdump -ma w3wp.exe -e 1" shown below. As the above OleDbException is the first exception during the execution, this command will generate a full user dump as soon as the exception happens. Notice that the Pull server w3wp process is running as 32 bit, in the next step, we will need a 32 bit windbg to debug it because of this. 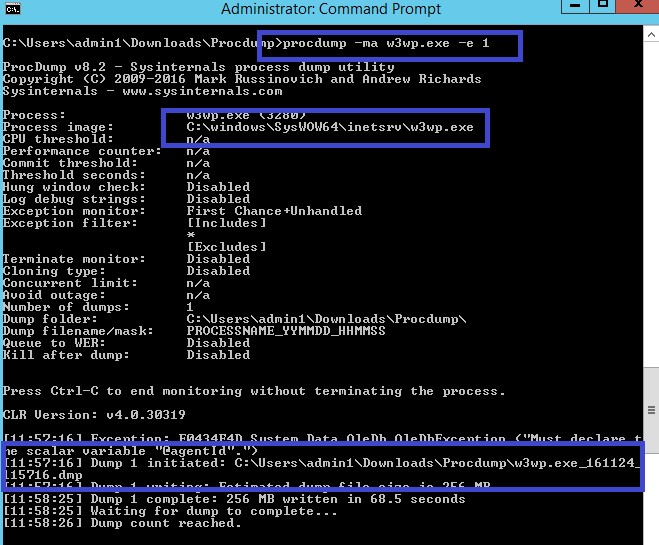 Next, I would like to run command " !dso", it will show all the objects in the current thread stack shown below.

On the stack, I can see the extract OleDbException object and the error message "Must declare the scalar variable "@agentId"". Furthermore, I find a OleDbCommand object which is supposed have the query string field. Use command !DumpObj to dump it and also the command text shown below. 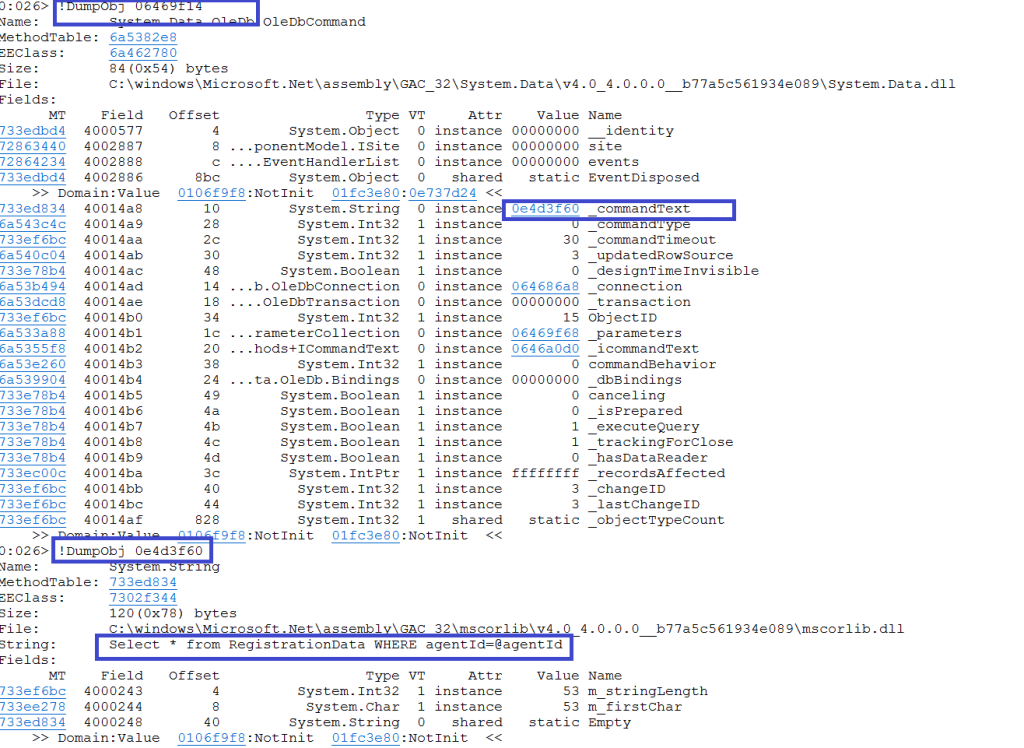 Good, looks like I just get some progress, I can see the query string is "Select * from RegistrationData WHERE agentId=@agentId" which looks to be related to the error message. While, there are so many SQL query inside Pull server, how could I figure out where the command is constructed? Easy, let's execute command " !clrstack", it will show current thread call stack, our attention is the Pull server code path.

Based on the function name I get from the above call stack, I would like to have a look on the source code of ReadRegistrationRecordFromDatabase. What? Source code? But this is a 3rd library. Yes, I know, but we can as this is a .Net application. Download ILSpy and open Microsoft.Powershell.DesiredStateConfiguration.Service.dll, you will be able to find it in C:\inetpub\wwwrootPSDSCPullServer\bin. Now, I got the source code shown below, interesting, looks like the query string is constructed by design and it is expected to work with named parameter. So, probably the named parameter doesn't work as expectation?

After further research, I am able to find the statement " The OLE DB .NET Provider does not support named parameters for passing parameters to an SQL statement or a stored procedure called by an OleDbCommand when CommandType is set to Text . In this case, the question mark (?) placeholder must be used. " in OleDbCommand.Parameters Description and looks like it can explain the scenario I observed. Finally, I change the above code from "Select * from RegistrationData WHERE agentId=@agentId" to "Select * from RegistrationData WHERE agentId=?", it works smoothly!

Now, I understand DSC server has used named parameter while it is not supported well by OleDbCommand, thus we can't directly use SQL Server by OleDb provider. I used to post another article Use Procdump to troubleshoot white screen issue of Bonobo git server regarding to similar 3rd software debugging experience as well, hope helpful for you. By the way, I also notice another post in https://leandrowpblog.wordpress.com/2016/10/26/using-sql-server-db-for-dsc/ regarding to consume SQL Server in DSC server by different approach, enjoy it.