In this post I want to cover some of the core functional aspects of the new delegates feature introduced in AX 2012. X++ delegates expose the publisher -subscriber pattern where a delegate defines a clear contract in a publisher class. This contract is used when an event occurs where the event can be a change of state, where all interested classes receive notification that the event has occurred.

The class that contains the delegate as a member is called a publisher class. A delegate must be defined on a class by using the right-click context menu ‘New > Delegate’ and it is important to mention there is no support for delegates on other AOT artifacts, just classes. 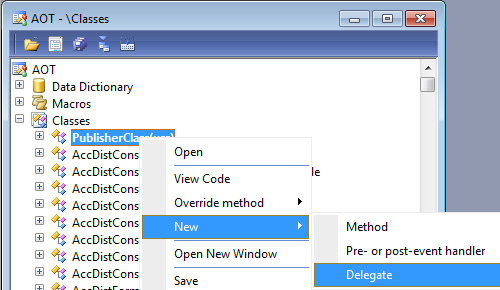 A delegate never returns a value. A delegate is always a protected member of the class. The delegate can be invoked only by instance members of the class or derived classes. Here is a declaration of a delegate:

The delegate is protected because only the owner should decide when its specific event has occurred. However, if he or she has a good reason to, a public method that invokes the delegate indirectly can be introduced as follows:

There is no limitation on the number of parameters a delegate can declare and there is no limitation on the type of those parameters. (For information about the compatibility of value types between X++ and .NET, see https://msdn.microsoft.com/en-us/library/cc584291.aspx) The delegate body is always empty, because the delegate’s only purpose is to define the contract that subscribers must conform to. A class can contain zero or more delegates.

A delegate cannot be overridden in derived classes. Interfaces cannot have delegates.

Whenever a new event handler is subscribed into a delegate in the AOT, the metadata associated with the delegate changes. These metadata changes require that the delegate be recompiled.

Methods that subscribe to an X++ delegate are called event handlers. An event handler can be written in two formats:

There are two mechanisms available to subscribe method to an X++ delegate:

Event handlers in the AOT.

In the AOT, a method can be subscribed to a delegate by dragging the method onto the delegate. The subscribed event handler method must meet the following criteria:

As an example, consider a second class to be used as the subscriber named SubscriberOneClass, which contains a method that will be subscribed to the earlier delegate. The method merely writes to the infolog window:

The most interesting property is ‘EventHandlerType’. Its two possible values are:

A delegate cannot be modified in a higher layer. The sequence in which the delegate fires each event handler cannot be specified and may vary between delegate invocations.

Event handlers can be subscribed to a delegate during run time by X++ code. Consider a second subscriber class that is named SubscriberTwoClass. This class has to public methods, but only one is static:

The following X++ job subscribes both the static and instance methods to the delegate. Note the += operator and the eventhandler keyword:

In this example the delegate is called through the callNotifyChange public method.

The -= operator over the eventHandler keyword can be as well utilized to remove event handlers previously added. Event handlers in the AOT cannot be removed using this approach at run time.

When the publisher object eventually goes out of scope, the X++ runtime releases the references to all the subscriber objects, so their resources can be reclaimed for the system.

Publisher and subscriber objects must run on the same tier.

The delegate infrastructure does not allow making calls cross tiers. For example, if the publisher object which owns the delegate is running on the client, the event handler method cannot be marked as RunOn server. This system design decision was made because calls across tier boundaries are resource intensive. If an application needs cross-tier transitioning, it can be achieved by using regular X++ method invocation. The application logic would need to encapsulate the behavior.

Dynamics AX 2012 has two new classes that are instantiated whenever event handlers are called by a delegate: SysXppEvent and SysXppEventHandler. The names of these classes can be seen in some debugging scenarios, as is shown in the following image. 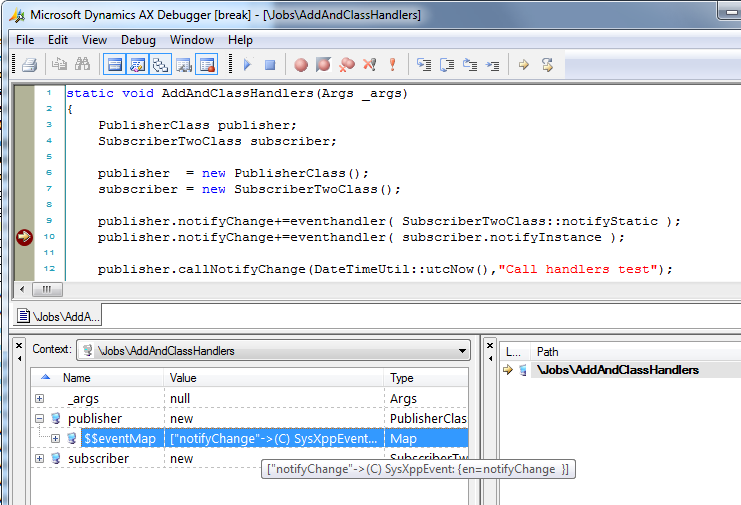 As with any other system X++ classes, it is strongly recommended that you neither update nor extend these two classes. Making any change to these classes could cause faulty behavior in the infrastructure that processes delegates, now or in the future.