This article describes an integrated solution for patient records management. A health organization needs to digitally store large amounts of highly sensitive patient medical test data in the cloud. Internal and third-party systems must be able to securely read and write the data through an application programming interface (API). All interactions with the data must be recorded in an audit register.

In this Azure solution, Azure API Management (APIM) controls access to the API through a single managed endpoint. The application backend consists of two interdependent Azure Functions microservice apps that create and manage patient records and audit records. APIM and the two function apps access each other through a locked-down virtual network.

Some benefits of serverless applications like Azure Functions are the cost savings and flexibility of using only necessary compute resources, rather than paying up front for dedicated servers. This solution lets Azure Functions use virtual network access restrictions for security, without incurring the cost and operational overhead of full Azure App Service Environments (ASEs).

This article and the associated code project distill the example scenario down to the main technical components, to serve as scaffolding for specific implementations. The solution automates all code and infrastructure deployments with Terraform, and includes automated integration, unit, and load testing. 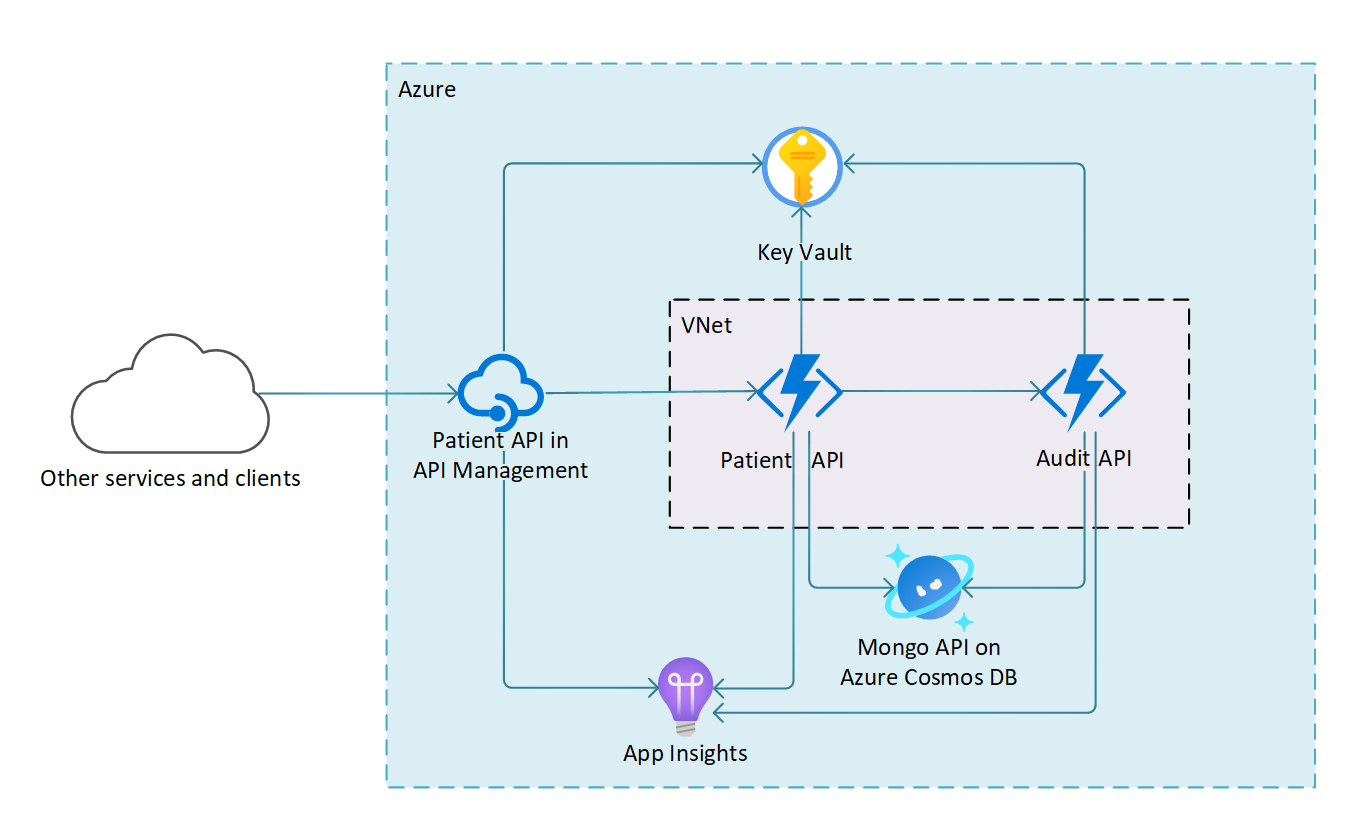 The solution uses the following components:

Consider the following aspects when implementing this solution.

Due to the sensitivity of the data, security is paramount in this solution. The solution uses several mechanisms to protect the data:

APIM allows for easy integration with different authentication mechanisms. The current solution requires a subscription key, but you could also use Azure Active Directory to secure the APIM endpoint without needing to manage subscription keys in APIM.

Function apps can restrict IPv4, IPv6, and virtual network subnet access. By default, a function app allows all access, but once you add one or more address or subnet restrictions, the app denies all other network traffic.

You can call APIM and function apps without using access keys. However, disabling the access keys isn't good security practice, so all components in this solution require keys for access.

Although it's possible to keep access keys and connection strings in the application settings, it's not good practice, because anyone who can access the app can see the keys and strings. The best practice, especially for production environments, is to keep the keys and strings in Azure Key Vault, and use the Key Vault references to call the apps. Key Vault allows access only to specified managed identities.

APIM uses an inbound policy to cache the Patient API host key for improved performance. For subsequent attempts, APIM looks for the key in its cache first.

Rotating Key Vault keys helps make the system more secure. You can automatically rotate keys periodically, or you can rotate keys manually or on demand in case of leakage.

The current solution uses Terraform for most of the key rotation tasks. For more information, see Key rotation pattern with Terraform.

In this solution, APIM and the function apps use Azure system-assigned managed service identities (MSIs) to access the Key Vault secrets. Key Vault has the following individual access policies for each service's managed identity:

The source code for this solution is at Azure VNet-Integrated Serverless Microservices.

The Typescript source code for the PatientTest API and the Audit API are in the /src folder. Each API's source includes a dev container that has all the prerequisites installed, to help you get going quickly.

Both APIs have a full suite of automated integration and unit tests to help prevent regressions when you make changes. The project is also configured for linting with ESLint, to maintain code styles and help guard against unintentional errors. The services' respective README files contain information on how to run the tests and linting.

The code project's /env folder includes scripts and templates for Terraform deployment. Terraform deploys APIM and the function apps, and configures them to use the deployed Application Insights instance. Terraform also provisions all resources and configurations, including networking lockdown and the access key security pattern.

The deployment README explains how to deploy the Terraform environment in your own Azure subscription. The /env folder also includes a dev container that has all the prerequisites installed for Terraform deployment.

To gauge API performance, you can run load testing against the APIs with the included Locust load tests. Locust is an open-source load testing tool, and the tests are written in Python. You can run the load tests locally, or remotely in an Azure Kubernetes Service (AKS) cluster. The tests perform a variety of operations against the APIM endpoint, and verify behaviors against success and failure criteria.