A well-known mass media and entertainment conglomerate replaced their on-premises video streaming service with a cloud-based solution for ingesting, processing, and publishing video assets. The company's main goals were to take advantage of Azure cloud capacity, cost, and flexibility to:

The engineering team developed Gridwich to align with principles and industry standards for:

The following steps describe the request and response process between an external system and Gridwich. In Gridwich, the external system is a MAM and saga workflow orchestration system. For the exact formats of Gridwich operations message events, see Gridwich message formats.

The external system might generate thousands of requests per day, per hour, or per second. Each request event to Gridwich must include a JSON object property named operationContext.

The response requirement is for a "corresponding" rather than the "same" JSON object. Gridwich features like context muting take advantage of the fact that the external system processes the returned JSON object in a top-down fashion.

Specifically, the external system has:

Each of the saga participants must retain the operation context, but may implement it differently. For example:

Every event handler in the system uses a common EventGridHandlerBase class to provide generic services such as request acknowledgment, failure handling, and publication of response events. The event publication service communicates the Acknowledgment, Failure, Scheduled, or Success messages to the Event Grid request broker.

Any handler that plans to work with the current request must provide an acknowledgment when it receives the request. The base class immediately sends an Acknowledgment message, and then dispatches the work to the derived class.

For requests that are easy to perform and fast to complete, the handler does the work synchronously and returns the Success event, with its operation context, almost immediately after the Acknowledgment is sent.

For example, the ChangeBlobTierHandler is a simple synchronous flow. The handler gets a Request data transfer object (DTO), calls and awaits a single service to do the work, and returns a Success or Failure response. 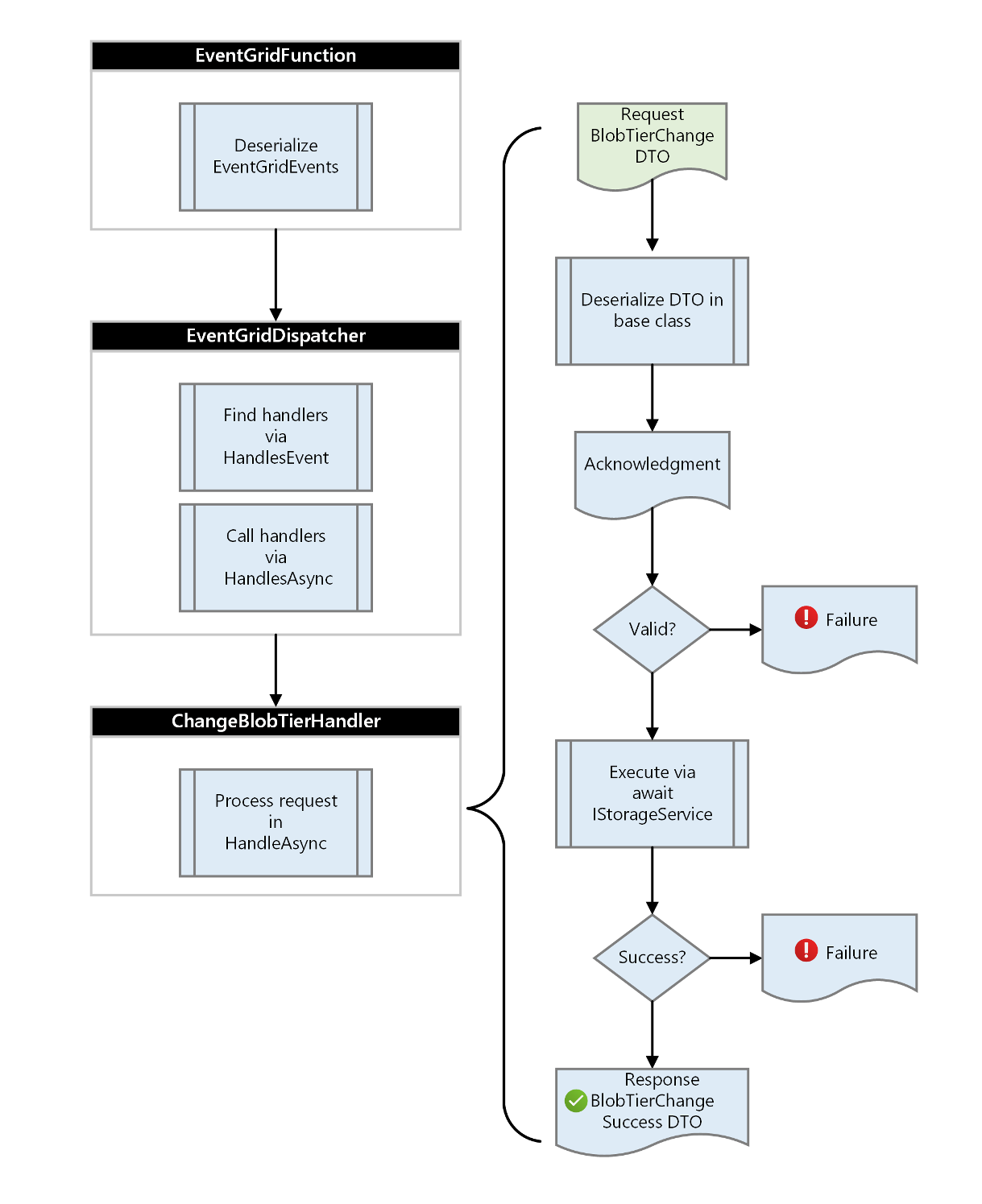 Some requests are long-running. For example, encoding media files can take hours. In these cases, an asynchronous request handler evaluates the request, validates arguments, and initiates the long-running operation. The handler then returns a Scheduled response to confirm that it requested the work activity.

On completing the work activity, the request handler is responsible for providing a Success or Failure completed event for the work. While remaining stateless, the handler must retrieve the original operation context and place it in the Completed event message payload.

For example, the BlobCopyHandler shows a simple asynchronous flow. The handler gets a Request DTO, calls and awaits a single service to initiate the work, and publishes a Scheduled or Failure response. 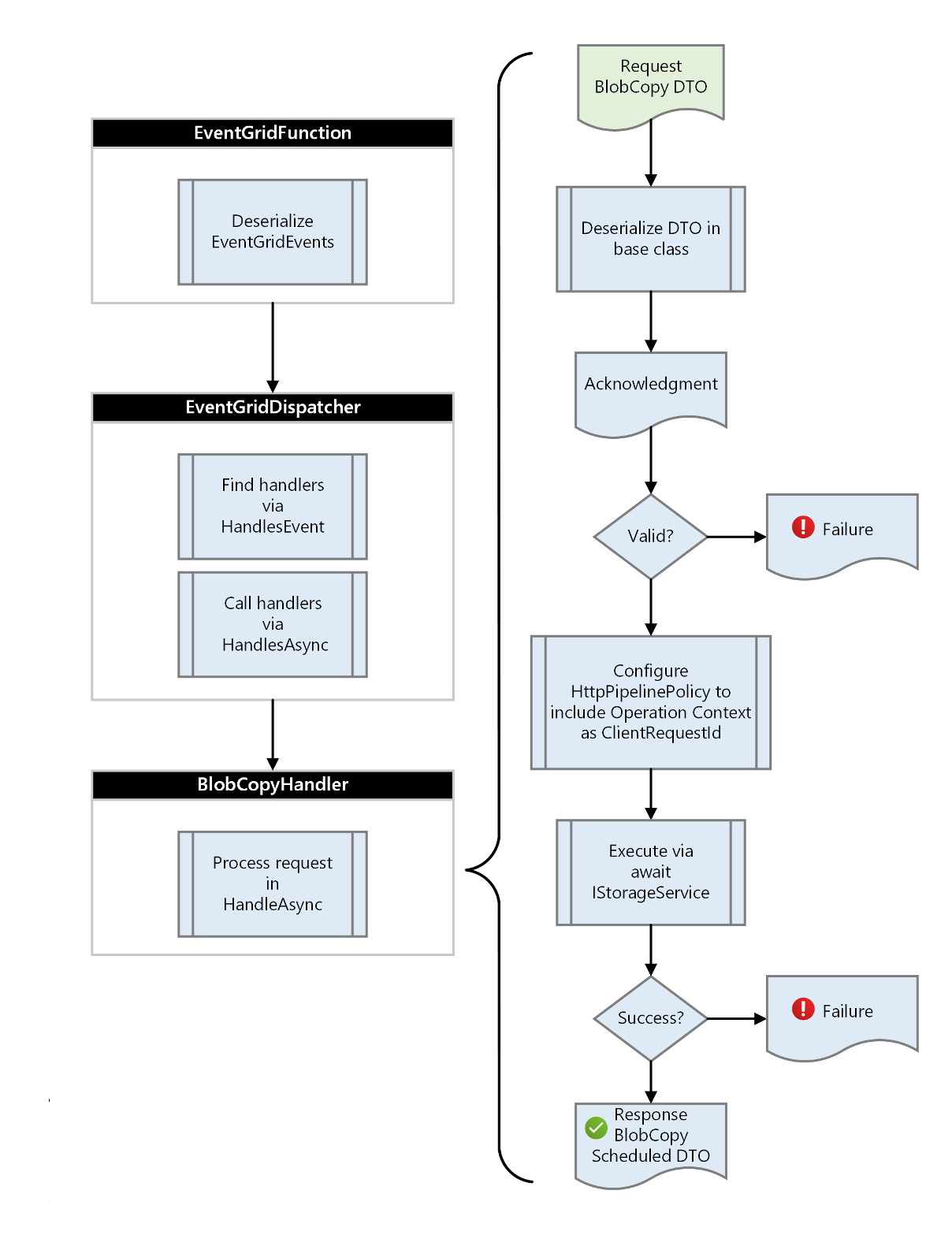 To complete the long-running request flow, the BlobCreatedHandler consumes the platform event Microsoft.Storage.BlobCreated, extracts the original operation context, and publishes a Success or Failure completion response. 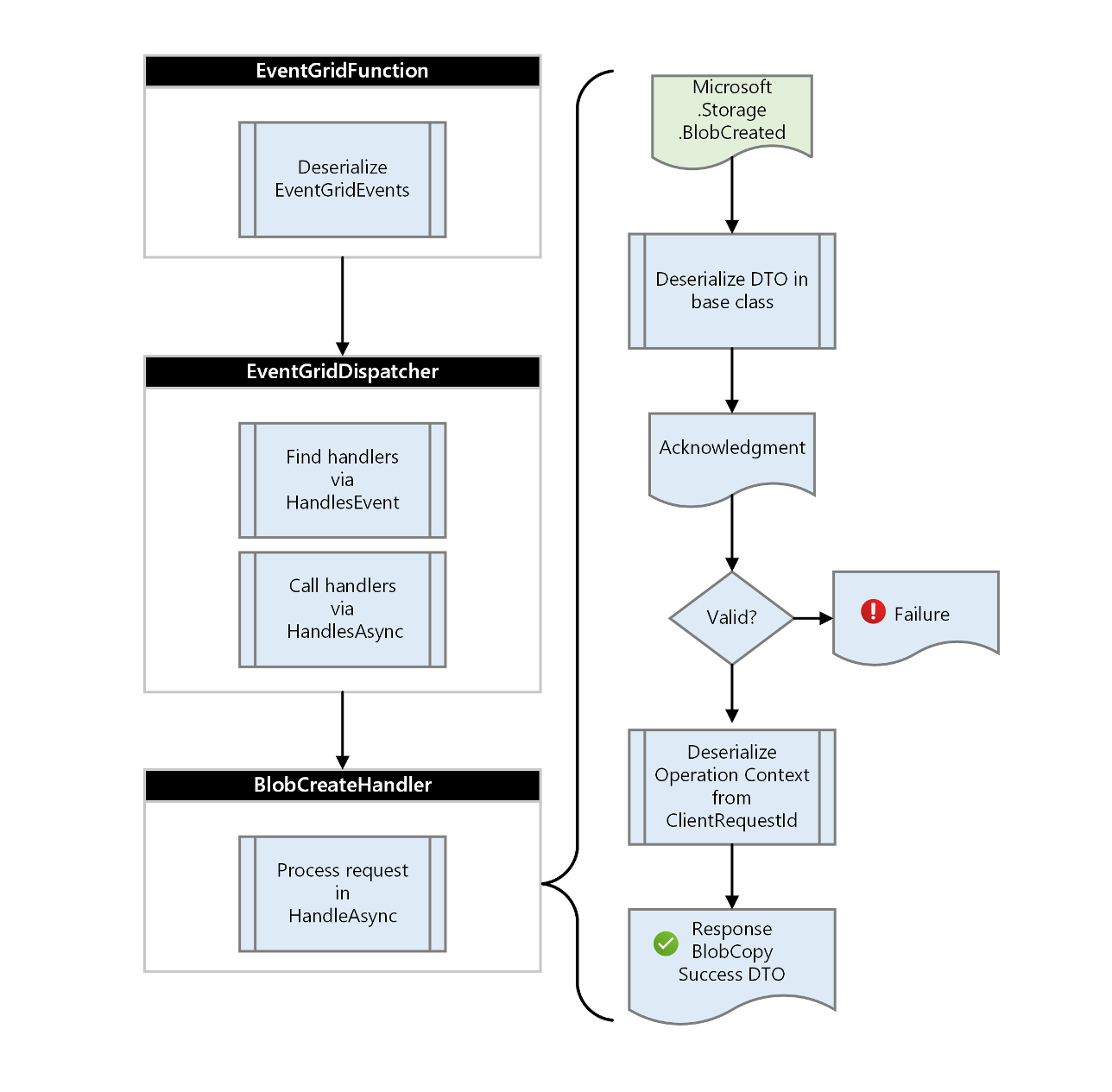 The following diagram shows how most Gridwich jobs work. The green box represents a job that Gridwich passes to an external service. Gridwich then reacts in an event-driven way to the status. The red box shows a function that is long-running on Gridwich itself. 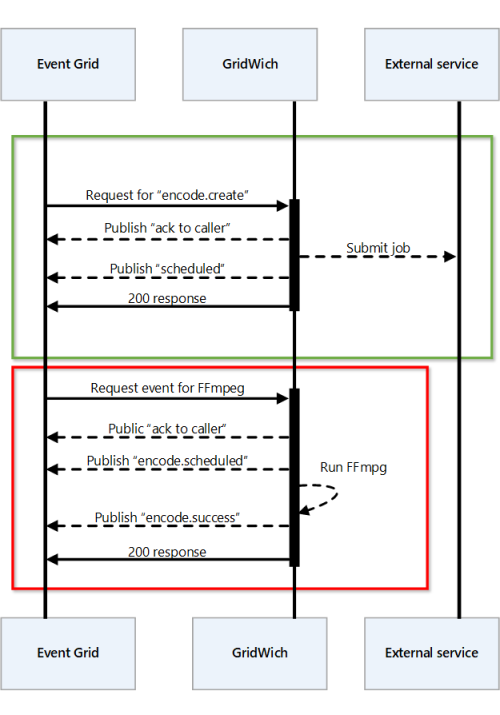 The Functions runtime adds the cancellation token when the application is shutting down. Gridwich detects the token and returns error codes for all requests and currently running processes.

Slot deployment deploys new software versions. The production slot has the running application, and the staging slot has the new version. Azure does a series of deployment steps and then swaps the slot instances. The old instance restarts as the last step of the process.

Gridwich waits 30 seconds after remapping the host names, so for HTTP-triggered functions, Gridwich guarantees at least 30 seconds before the restart for the old production slot. Other triggers might be controlled by app settings that don't have a mechanism to wait on app setting updates. Those functions risk interruption if execution starts right before the old production slot restarts.