Azure Functions lets you develop your functions as PowerShell scripts.

PowerShell for Azure Functions is currently in preview. To receive important updates, subscribe to the Azure App Service announcements repository on GitHub.

You can debug your PowerShell functions locally as you would any PowerShell scripts using the following standard development tools:

The function app used in this article has a single HTTP triggered function and has the following files:

This function app is similar to the one you get when you complete the PowerShell quickstart.

The function code in run.ps1 looks like the following script:

All you need to do is add a call to the Wait-Debugger cmdlet just above the if statement, as follows:

Debugging starts at the if statement.

With Wait-Debugger in place, you can now debug the functions using either Visual Studio Code or a PowerShell console.

To debug your PowerShell functions in Visual Studio Code, you must have the following installed:

Should your project not have the needed configuration files, you are prompted to add them.

When you have a PowerShell file open, you see the version displayed in green at the bottom right of the window. Selecting this text also displays the session menu. To learn more, see the Choosing a version of PowerShell to use with the extension.

Verify that Wait-Debugger is set in the function where you want to attach the debugger. With Wait-Debugger added, you can debug your function app using Visual Studio Code.

Choose the Debug pane and then Attach to PowerShell function. 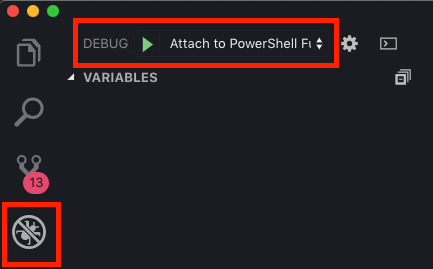 You can also press the F5 key to start debugging.

The start debugging operation does the following tasks:

You need to ensure PSWorkerInProcConcurrencyUpperBound is set to 1 to ensure correct debugging experience in Visual Studio Code. This is the default.

With your function app running, you need a separate PowerShell console to call the HTTP triggered function.

In this case, the PowerShell console is the client. The Invoke-RestMethod is used to trigger the function.

In a PowerShell console, run the following command:

You'll notice that a response isn't immediately returned. That's because Wait-Debugger has attached the debugger and PowerShell execution went into break mode as soon as it could. This is because of the BreakAll concept, which is explained later. After you press the continue button, the debugger now breaks on the line right after Wait-Debugger.

At this point, the debugger is attached and you can do all the normal debugger operations. For more information on using the debugger in Visual Studio Code, see the official documentation.

After you continue and fully invoke your script, you'll notice that:

Later when you invoke the same function, the debugger in PowerShell extension breaks right after the Wait-Debugger.

Debugging in a PowerShell Console

This section assumes you have read the Azure Functions Core Tools docs and know how to use the func host start command to start your function app.

Open up a console, cd into the directory of your function app, and run the following command:

With the function app running and the Wait-Debugger in place, you can attach to the process. You do need two more PowerShell consoles.

One of the consoles acts as the client. From this, you call Invoke-RestMethod to trigger the function. For example, you can run the following command:

You'll notice that it doesn't return a response, which is a result of the Wait-Debugger. The PowerShell runspace is now waiting for a debugger to be attached. Let's get that attached.

In the other PowerShell console, run the following command:

This cmdlet returns a table that looks like the following output:

Make note of the ProcessId for the item in the table with the ProcessName as dotnet. This process is your function app.

Next, run the following snippet:

Once started, the debugger breaks and shows something like the following output:

At this point, you're stopped at a breakpoint in the PowerShell debugger. From here, you can do all of the usual debug operations, step over, step into, continue, quit, and others. To see the complete set of debug commands available in the console, run the h or ? commands.

You can also set breakpoints at this level with the Set-PSBreakpoint cmdlet.

Once you continue and fully invoke your script, you'll notice that:

You can invoke the same function again (using Invoke-RestMethod for example) and the debugger breaks in right after the Wait-Debugger command.

Keep in mind the following issues when debugging your Functions code.

BreakAll might cause your debugger to break in an unexpected place

The PowerShell extension uses Debug-Runspace, which in turn relies on PowerShell's BreakAll feature. This feature tells PowerShell to stop at the first command that is executed. This behavior gives you the opportunity to set breakpoints within the debugged runspace.

Should this break happen, run the continue or c command to skip over this breakpoint. You then stop at the expected breakpoint.