This is one of the reasons we introduced USE HINT query hints back in SQL Server 2016 SP1. The new class of hints is meant to provide knobs that are sometimes required, in a fully supported way, without having to remember trace flag numbers: which one is easier to understand below? Yet both queries implement the same behavior – to not use row goal during query optimization.

You can read more about USE HINTS here and here, and on row goal here.

As you probably understood by now, the existing USE HINT hints are meant to tweak the Query Optimizer for a specific intent, including the hints FORCE_LEGACY_CARDINALITY_ESTIMATION and FORCE_DEFAULT_CARDINALITY_ESTIMATION. On the latter, the “default” cardinality estimation (CE) is the CE model mapped to the database compatibility level in use (in turn, using a newer compatibility level also implies use of query optimizer fixes under trace flag 4199). Talking about the versions of the CE is a whole topic by itself, so I won’t get into much detail here, and you can read more on the versions of the CE here.

What is important to retain is that we have moved away from the notion of “New CE” and “Old CE”. Because in every version we have made changes and fixes to query optimization, there is no all-up “New CE” anymore. Referring to CE versions becomes clearer, and so we have CE70 (default CE for SQL Server 7.0 through SQL Server 2012), and starting with SQL Server 2014, the number that is default for each engine version: CE120 for 2014, CE130 for 2016, CE140 for 2017, and so on.

With that, let’s introduce a scenario:

In this scenario, you only have this one query that apparently does better in SQL Server 2014 than 2017. That’s all “New CE” – there’s no CE70 vs CE 120+ at issue here. Using any known trace flag, the FORCE_LEGACY_CARDINALITY_ESTIMATION hint or the FORCE_DEFAULT_CARDINALITY_ESTIMATION hint doesn’t help. Rewriting the query is an option, but in the interim, I need a quick fix. How?

In SQL Server 2017 CU10, we have introduced a few new USE HINTs: the QUERY_OPTIMIZER_COMPATIBILITY_LEVEL_n, where n is a supported database compatibility level. This forces the query optimizer behavior at a query level, as if the query was compiled with database compatibility level. You can refer to sys.dm_exec_valid_use_hints for a list of currently supported values for n.

Note: if you are running with trace flag 4199 enabled globally, then *all* query optimizer fixes are enabled, not only those default to the specified database compatibility level.

And what is the outcome for the scenario above?

See for yourself below: using the new hint, I was able to compile that specific query as if the database compatibility level remained at SQL Server 2014 level (top plan), and you see the differences with the SQL Server 2017 plan (bottom plan).

Looking in the properties, also notice the differences between the used CE versions (120 vs 130) and the respective QueryTimeStats. 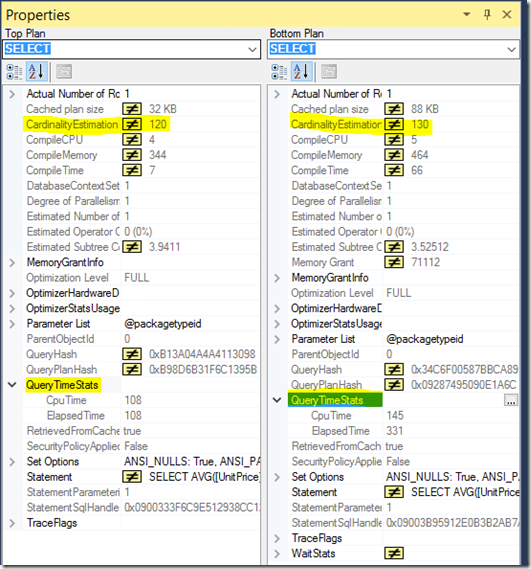 Like any hint, it forces certain behaviors that may get addressed in subsequent updates. So Microsoft recommends you only apply hints when no other option exists, and plan to revisit hinted code with every new upgrade. By forcing behaviors, you may be precluding your workload from benefiting of enhancements introduced in newer versions.