The basics of SMB Multichannel, a feature of Windows Server 2012 and SMB 3.0

At least one of the configurations below:

SMB Multichannel is enabled by default. There is no need to install components, roles, role services or features.
The SMB client will automatically detect and use multiple network connections if a proper configuration is identified.

On the SMB server side:

On the SMB client side:

Note: Disabling the feature on either the client or the server prevent the systems from using it.

You can re-enable SMB Multichannel after you disabled it by using:

On the SMB server side:

On the SMB client side:

Note: You need to enable the feature on both the client or the server to start using it again.

This section provides details on how SMB Multichannel works with a few different configurations using a variety of Network Interface Cards (NIC). Please note that these are only samples and many other configurations not detailed here are possible.

This typical configuration involves an SMB client and SMB Server configured with a single 10GbE NIC. Without SMB multichannel, if there is only one SMB session established, SMB uses a single TCP/IP connection, which naturally gets affinitized with a single CPU core. If lots of small IOs are performed, it’s possible for that core to become a performance bottleneck.

Most NICs today offer a capability called Receive Side Scaling (RSS), which allows multiple connections to be spread across multiple CPU cores automatically. However, when using a single connection, RSS cannot help.

With SMB Multichannel, if the NIC is RSS-capable, SMB will create multiple TCP/IP connections for that single session, avoiding a potential bottleneck on a single CPU core when lots of small IOs are required.

When using multiple NICs without SMB multichannel, if there is only one SMB session established, SMB creates a single TCP/IP connection using only one of the many NICs available. In this case, not only it’s not possible to aggregate the bandwidth of the multiple NICs (achieve 2Gbps when using two 1GbE NICs, for instance), but there is a potential for failure if the specific NIC chosen is somehow disconnected or disabled.

With Multichannel, SMB will create multiple TCP/IP connections for that single session (at least one per interface or more if they are RSS-capable). This allows SMB to use the combined NIC bandwidth available and makes it possible for the SMB client to continue to work uninterrupted if a NIC fails.

Windows Server 2012 supports the ability to combine multiple NICs into one using a new feature commonly referred to as NIC teaming. Although a team always provides fault tolerance, SMB without Multichannel will create only one TCP/IP connection per team, leading to limitations in both the number of CPU cores engaged and the use of the full team bandwidth.

Note: A team of RDMA-capable NICs is always reported as non-RDMA capable. If you intend to use the RDMA capabilities of the NIC, do not team them.

SMB Multichannel is the feature responsible for detecting the RDMA capabilities of NICs to enable the SMB Direct feature (SMB over RDMA). Without SMB Multichannel, SMB will use regular TCP/IP with these RDMA-capable NICs (they all provide a TCP/IP stack side-by-side with the new RDMA stack).

With SMB Multichannel, SMB will detect the RDMA capability and create multiple RDMA connections for that single session (two per interface). This allows SMB to use the high throughput, low latency and low CPU utilization offered by these RDMA NICs. It will also offer fault tolerance if you’re using multiple RDMA interfaces. 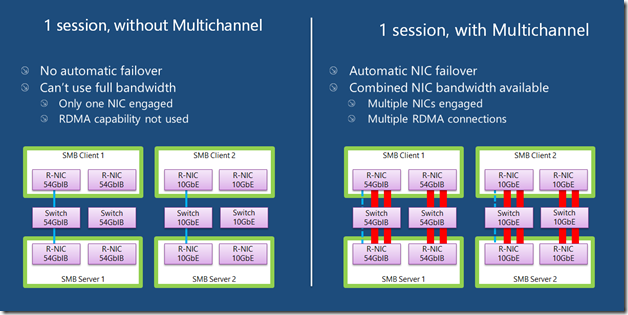 Note 1: A team of RDMA-capable teams is reported as non-RDMA capable. If you intend to use the RDMA capability of the NIC, do not team them.

For non-RDMA NICs, your best bet is combining NIC Teaming with SMB Multichannel. This will give you the best throughput, plus fault tolerance for applications using SMB and other protocols.

When using RDMA NICs, LBFO is not a good option, since it disables the RDMA capability of the NIC.

3.6. Sample Configurations that do not use SMB Multichannel

The following are sample network configurations that do not use SMB Multichannel:

Here are a few common scenarios for testing SMB Multichannel:

4.1. Compare a file copy with and without SMB Multichannel

To measure the increased throughput provided by SMB Multichannel, follow these steps:

Note: to avoid the effects of caching, you should:

4.2. Fail one of multiple NICs during a file copy with SMB Multichannel

To confirm the failover capability of SMB Multichannel, follow these steps:

Note: Make sure there are no other workloads using the disconnected/disabled path, to avoid failures in workloads that do not leverage SMB Multichannel.

You can use the following steps to verify you are using SMB Multichannel.

Use the following PowerShell cmdlets to verify you have multiple NICs and/or to verify the RSS and RDMA capabilities of the NICs. Run on both the SMB server and the SMB client.

On the SMB client, run the following PowerShell cmdlets:

On the SMB server, run the following PowerShell cmdlets:

On the SMB client, start a long-running file copy to create a lasting session with the SMB Server. While the copy is ongoing, open a PowerShell window and run the following cmdlets to verify the connection is using the right version of SMB and that SMB Multichannel is working:

SMB 3.0 offers a “Object State Diagnostic” event log that can be used to troubleshoot Multichannel (and therefore RDMA) connections.
Keep  in mind that this is a debug log, so it’s very verbose and requires a special procedure for gathering the events. You can follow the steps below:

After the log is enabled, perform the operation that requires an RDMA connection. For instance, copy a file or run a specific operation.
If  you’re using mapped drives, be sure to map them after you enable the log, or else the connection events won’t be properly captured.

You can review the events on the log in Event Viewer. You can filter the log to include only the SMB events that confirm that you have an SMB Multichannel or only error events.

The “Smb_MultiChannel” keyword will filter for connection, disconnection and error events related to SMB. You can also filter by event numbers 30700 to 30706.

To view the SMB Multichannel events using Event Viewer, use the following steps on the SMB Client:

To view only errors:

You can also use a PowerShell window and run the following cmdlets to view the events.

To see any RDMA-related connection events, you can use the following:

To view all types of SMB Multichannel events , use the following cmdlet on the SMB Client:

There are several Performance counters related to SMB in Windows Server 2012. To view SMB-related performance information, follow these steps:

The following Performance Counters are useful when looking at activities related to SMB, SMB Direct and Network Direct:

6. Number of SMB Connections per Interface

SMB Multichannel will use a different number of connections depending on the type of interface:

There is also a limit of 8 connections total per client/server pair which will limit the number connections per interface.

We recommend that you keep the default settings for SMB Multichannel. However, those parameters can be adjusted.

You can configure the maximum total number of connections per client/server pair using:

You can configure the number SMB Multichannel connections per RSS-capable network interface using the PowerShell cmdlet:

It is even less likely that you’ll need to adjust the number of connections per RDMA-capable interface.

That can be configured via a registry key using the following PowerShell command:

6.4. Connections for other types of NIC

For NICs that are not RSS-capable or RDMA-capable, there is likely no benefit of using multiple connections. In fact, this will likely reduce your performance.

However, for troubleshooting purposes, there is also a registry key to change the default settings of 1 connection per NIC.

That can be configured via a registry key using the following PowerShell command:

Because of feedback during the Beta, we added in the Release Candidate a new set of cmdlets using the SmbMultichannelConstraint noun to allow you to control the SMB Multichannel behavior in more complex network configurations.

For instance, if you have 4 NICs in your system and you want the SMB client to use only two specific NICs when you access server FS1, you can accomplish that with the following PowerShell cmdlets:

Here are a few notes and comments on how to use SMB Multichannel Constraints:

This is an advanced setting, available only via PowerShell (or WMI). Please be careful when configuring these SMB Multichannel constraints, because you have the potential to apply a less-than-ideal configuration and end up with something that does not provide you the best level of network fault tolerance (also known as “shooting yourself in the foot”).

This is specially true if you add/remove network adapters from your system and forget to adjust your constraints accordingly. We highly recommend that you stick to the default, let-SMB-Multichannel-figure-it-out configuration if at all possible, since this will let SMB 3.0 dynamically and automatically adjust to any changes in network configuration shortly after it happens.

I hope this blog post has helped you understand the basics of SMB Multichannel. I would encourage you to try it out in any of the configurations shown.