Notice that I used the phrase "without ever observingany ... changes."  This choice of words is deliberate.  In serializable isolation level, SQL Server acquires key range locks and holds them until the end of the transaction.  A key range lock ensures that, once a transaction reads data, no other transaction can alter that data - not even to insert phantom rows - until the transaction holding the lock completes.  In snapshot isolation level, SQL Server does not acquire any locks.  Thus, it is possible for a concurrent transaction to modify data that a second transaction has already read.  The second transaction simply does not observe the changes and continues to read an old copy of the data.

It is clear there are differences in the level of concurrency that can be achieved and in the failures (deadlocks vs. update conflicts) that are possible with the serializable and snapshot isolation levels.

If we run these transactions under snapshot isolation, there is a third outcome that is not possible under serializable isolation.  Each transaction can simultaneously take a snapshot of the bag of marbles as it exists before we make any changes.  Now one transaction finds the white marbles and turns them into black marbles.  At the same time, the other transactions finds the black marbles - but only those marbles that where black when we took the snapshot - not those marbles that the first transaction changed to black - and turns them into white marbles.  In the end, we still have a mixed bag of marbles with some white and some black.  In fact, we have precisely switched each marble.

The following graphic illustrates the difference: 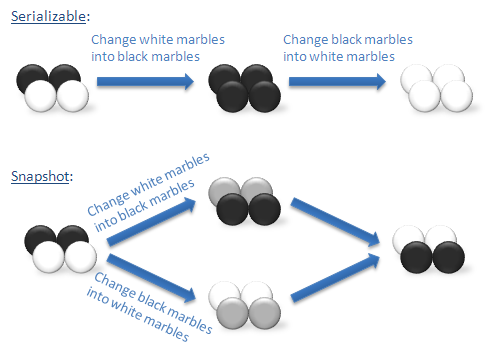 We can demonstrate this outcome using SQL Server.  Note that snapshot isolation is only available in SQL Server 2005 and must be explicitly enabled on your database:

Next, in session 1 begin a snaphot transaction:

Now, before committing the changes, run the following in session 2:

Finally, commit the transaction in session 1 and check the data in the table:

Here are the results:

As you can see marble 1 which started out black is now white and marble 2 which started out white is now black.  If you try this same experiment with serializable isolation, one transaction will wait for the other to complete and, depending on the order, both marbles will end up either white or black.