As mentioned in Demystifying "Dual Scan", configuring a combination of policies on Windows 10 1607 can result in those clients automatically [and unexpectedly] scanning against Windows Update, as well as subsequently ignoring deployment instructions from WSUS. We heard feedback from on-premises administrators that they needed the deferral policies only for ad hoc scans against Windows Update, a scenario which was not supported. The previous post mentioned a summer release of a policy on 1607 that would address the issue, and we are pleased to announce that this policy has arrived.

The package containing this policy is available today from KB4034658, which is the August cumulative update released to the WSUS channel on 8/8/2017. After installing this update (or any update released on July 18th or later), you will see this group policy under Windows Components/Windows Update: 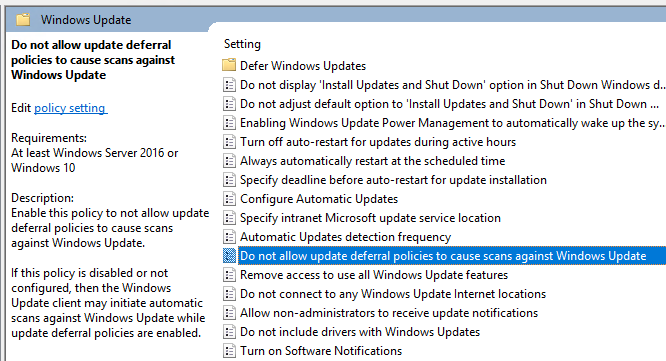 How Dual Scan works with this policy
In order for Dual Scan to be enabled, the Windows Update client now also requires that the "Do not allow update deferral policies to cause scans against Windows Update" is not configured. In other words, if this policy is enabled, then changing the deferral policies in a WSUS environment will not cause Dual-Scan behavior. This allows enterprise administrators to mark their machines as "Current Branch for Business," and to specify that feature updates should not be delivered before a certain amount of days, without worrying that their clients will start scanning Windows update unbidden. This means that usage of deferral policies is now supported in the on-premises environment. While the new policy (dubbed "Disable Dual Scan") is enabled, any deferral policies configured for that client will apply only to ad hoc scans against Windows Update, which are triggered by clicking "Check online for updates from Microsoft Update":

Now available: ADMX and MDM
We prioritized getting this update out to the broadest install base on 1607. In parallel, we ported the changes to 1703 and 1709. Installing the latest cumulative update on any of these platforms will allow you to access the Disable Dual Scan policy via MDM. You can also configure it centrally via the new administrative template that was released in conjunction with the 1709 feature update.