Instead of storing just the current state of the data in a domain, use an append-only store to record the full series of actions taken on that data. The store acts as the system of record and can be used to materialize the domain objects. This can simplify tasks in complex domains, by avoiding the need to synchronize the data model and the business domain, while improving performance, scalability, and responsiveness. It can also provide consistency for transactional data, and maintain full audit trails and history that can enable compensating actions.

Most applications work with data, and the typical approach is for the application to maintain the current state of the data by updating it as users work with it. For example, in the traditional create, read, update, and delete (CRUD) model a typical data process is to read data from the store, make some modifications to it, and update the current state of the data with the new values—often by using transactions that lock the data.

The CRUD approach has some limitations:

The Event Sourcing pattern defines an approach to handling operations on data that's driven by a sequence of events, each of which is recorded in an append-only store. Application code sends a series of events that imperatively describe each action that has occurred on the data to the event store, where they're persisted. Each event represents a set of changes to the data (such as AddedItemToOrder).

The events are persisted in an event store that acts as the system of record (the authoritative data source) about the current state of the data. The event store typically publishes these events so that consumers can be notified and can handle them if needed. Consumers could, for example, initiate tasks that apply the operations in the events to other systems, or perform any other associated action that's required to complete the operation. Notice that the application code that generates the events is decoupled from the systems that subscribe to the events.

In addition, at any point it's possible for applications to read the history of events, and use it to materialize the current state of an entity by playing back and consuming all the events related to that entity. This can occur on demand to materialize a domain object when handling a request, or through a scheduled task so that the state of the entity can be stored as a materialized view to support the presentation layer.

The figure shows an overview of the pattern, including some of the options for using the event stream such as creating a materialized view, integrating events with external applications and systems, and replaying events to create projections of the current state of specific entities. 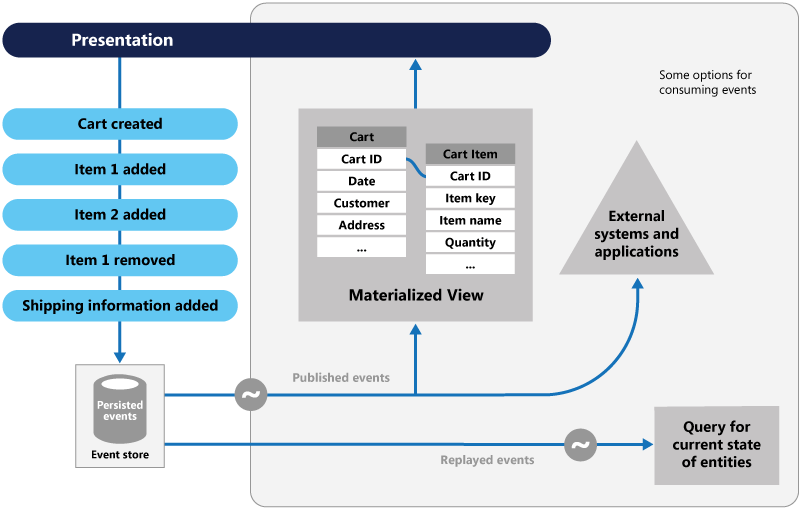 Event sourcing is commonly combined with the CQRS pattern by performing the data management tasks in response to the events, and by materializing views from the stored events.

Consider the following points when deciding how to implement this pattern:

The system will only be eventually consistent when creating materialized views or generating projections of data by replaying events. There's some delay between an application adding events to the event store as the result of handling a request, the events being published, and consumers of the events handling them. During this period, new events that describe further changes to entities might have arrived at the event store.

See the Data Consistency Primer for information about eventual consistency.

The event store is the permanent source of information, and so the event data should never be updated. The only way to update an entity to undo a change is to add a compensating event to the event store. If the format (rather than the data) of the persisted events needs to change, perhaps during a migration, it can be difficult to combine existing events in the store with the new version. It might be necessary to iterate through all the events making changes so they're compliant with the new format, or add new events that use the new format. Consider using a version stamp on each version of the event schema to maintain both the old and the new event formats.

Multi-threaded applications and multiple instances of applications might be storing events in the event store. The consistency of events in the event store is vital, as is the order of events that affect a specific entity (the order that changes occur to an entity affects its current state). Adding a timestamp to every event can help to avoid issues. Another common practice is to annotate each event resulting from a request with an incremental identifier. If two actions attempt to add events for the same entity at the same time, the event store can reject an event that matches an existing entity identifier and event identifier.

There's no standard approach, or existing mechanisms such as SQL queries, for reading the events to obtain information. The only data that can be extracted is a stream of events using an event identifier as the criteria. The event ID typically maps to individual entities. The current state of an entity can be determined only by replaying all of the events that relate to it against the original state of that entity.

The length of each event stream affects managing and updating the system. If the streams are large, consider creating snapshots at specific intervals such as a specified number of events. The current state of the entity can be obtained from the snapshot and by replaying any events that occurred after that point in time. For more information about creating snapshots of data, see Primary-Subordinate Snapshot Replication.

Even though event sourcing minimizes the chance of conflicting updates to the data, the application must still be able to deal with inconsistencies that result from eventual consistency and the lack of transactions. For example, an event that indicates a reduction in stock inventory might arrive in the data store while an order for that item is being placed, resulting in a requirement to reconcile the two operations either by advising the customer or creating a back order.

Event publication might be at least once, and so consumers of the events must be idempotent. They must not reapply the update described in an event if the event is handled more than once. For example, if multiple instances of a consumer maintain and aggregate an entity's property, such as the total number of orders placed, only one must succeed in incrementing the aggregate when an order placed event occurs. While this isn't a key characteristic of event sourcing, it's the usual implementation decision.

Use this pattern in the following scenarios:

This pattern might not be useful in the following situations:

The following diagram illustrates how the seat reservation subsystem of the conference management system might be implemented using event sourcing. 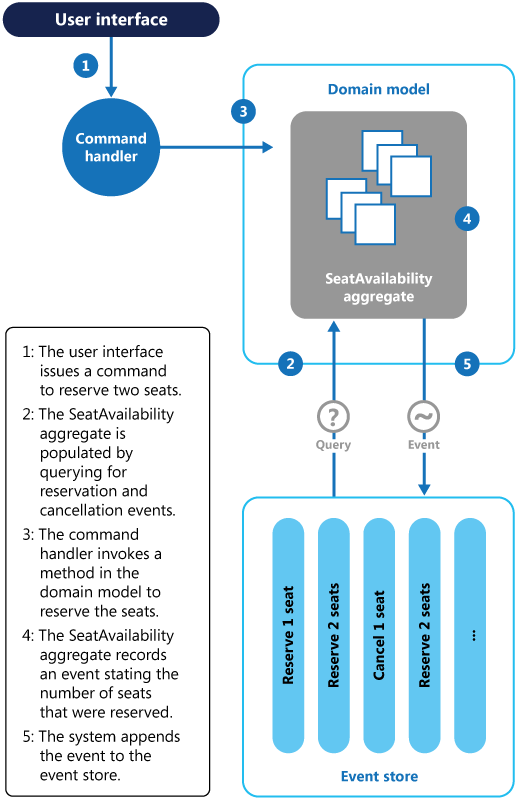 The sequence of actions for reserving two seats is as follows:

If a user cancels a seat, the system follows a similar process except the command handler issues a command that generates a seat cancellation event and appends it to the event store.

As well as providing more scope for scalability, using an event store also provides a complete history, or audit trail, of the bookings and cancellations for a conference. The events in the event store are the accurate record. There is no need to persist aggregates in any other way because the system can easily replay the events and restore the state to any point in time.

You can find more information about this example in Introducing Event Sourcing.