The world has concluded that Docker containers provide valuable capabilities. Some argue that it is just another form of virtualization, while others suggest it streamlines application delivery. This short presentation will attempt to directly answer the core value proposition of containers. 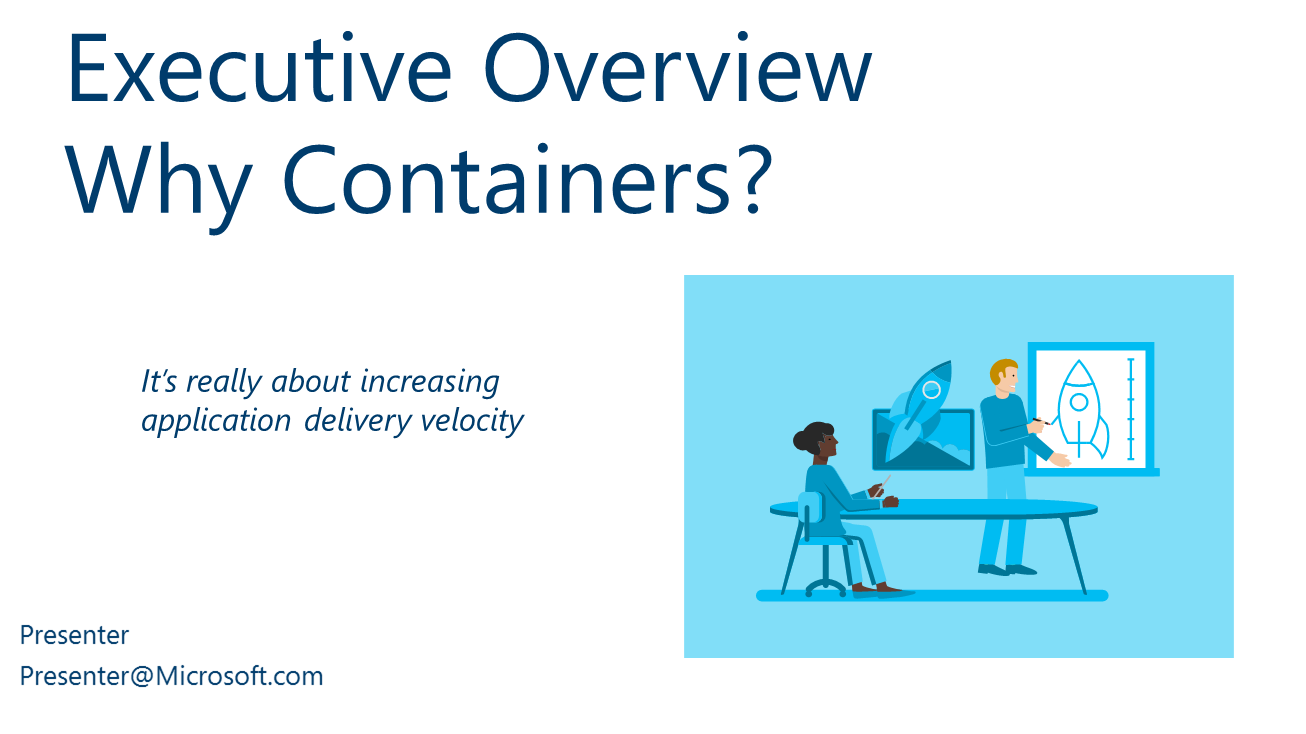 This is the agenda for this particular blog post. The interesting take away is that containerization predates cloud computing. You can trace its roots on the way back to 1979, as you will soon find out in this presentation. One of the key components here is understanding the relationship between containers and DevOps. We will begin by defining what a container is followed by a description of DevOps. From that point we can begin to understand how containerization has contributed greatly to the DevOps community. 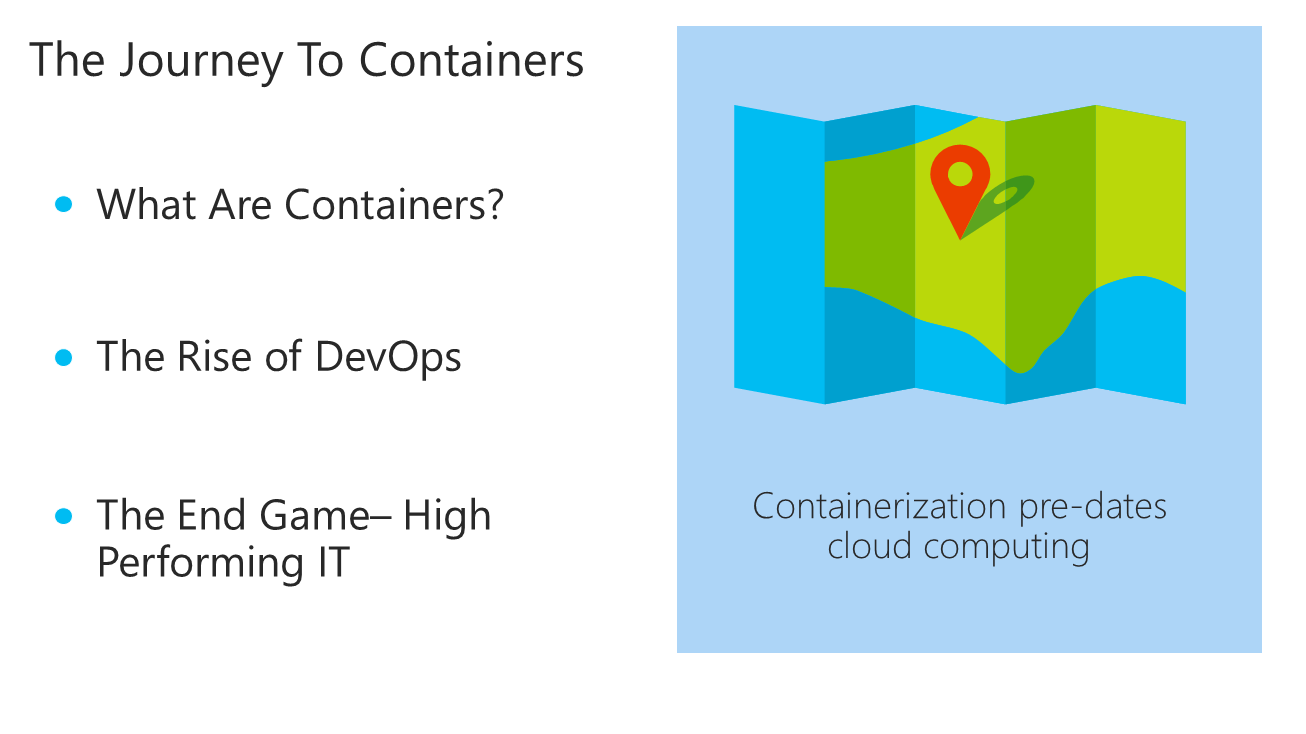 The really interesting take away here is that containerization actually started before cloud computing You’ll notice that some of the work with containerization was influenced by some of the technologies all the way back to 1979 In all the way in the early 2000’s significant innovation was occurring, particularly with Linux and Solaris But in 2006 Salesforce made a splash with software as a service This was at least two years later from the point that Solaris was investing heavily at the operating system level to define containerization.

It is interesting to note that cloud computing started with Software as a Service. This sort of application delivery model meant that there were no concerns for the underlying hardware for the maintenance of virtual machines. But this form of computing wasn’t the way traditional line of business applications ran in the enterprise. In order for enterprises to move to the cloud they needed to take their on premises applications that were running on virtual machines and run them in the cloud. That’s why Infrastructure as a Service became popular. But the maintenance of virtual machines represents a lot of manual labor. This led to the creation of platform as a service, a higher level of abstraction that allowed IT departments to think of the underlying infrastructure as a pool of compute power, not as a collection of virtual machines needed to be provisioned and maintained.

Later in this presentation will start talking about container orchestration. Before we go there will need to define what a container is and how it works.

But this slide should clear any misconception that Docker created containers. Docker did not come on the scene until 2013. 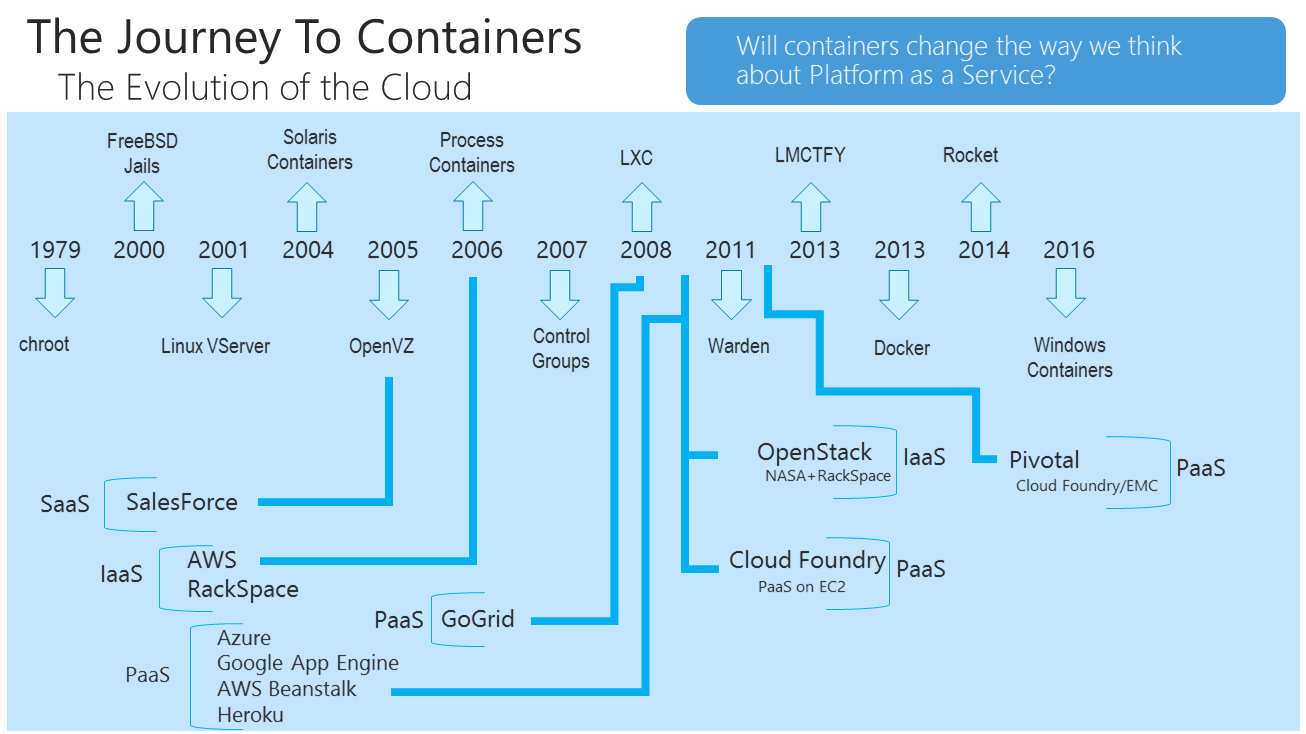 Slide 3: The evolution of the cloud and containers

A good starting point is to describe what containerization means.

The key take away is that if an application runs well on one computer, copping the container to another computer should also work reliably and predictably.

Another way to think about it is that everything you need is in one place, the application as well as everything else depends on. Reiterating once again, this means that application delivery is predictable and reliable. 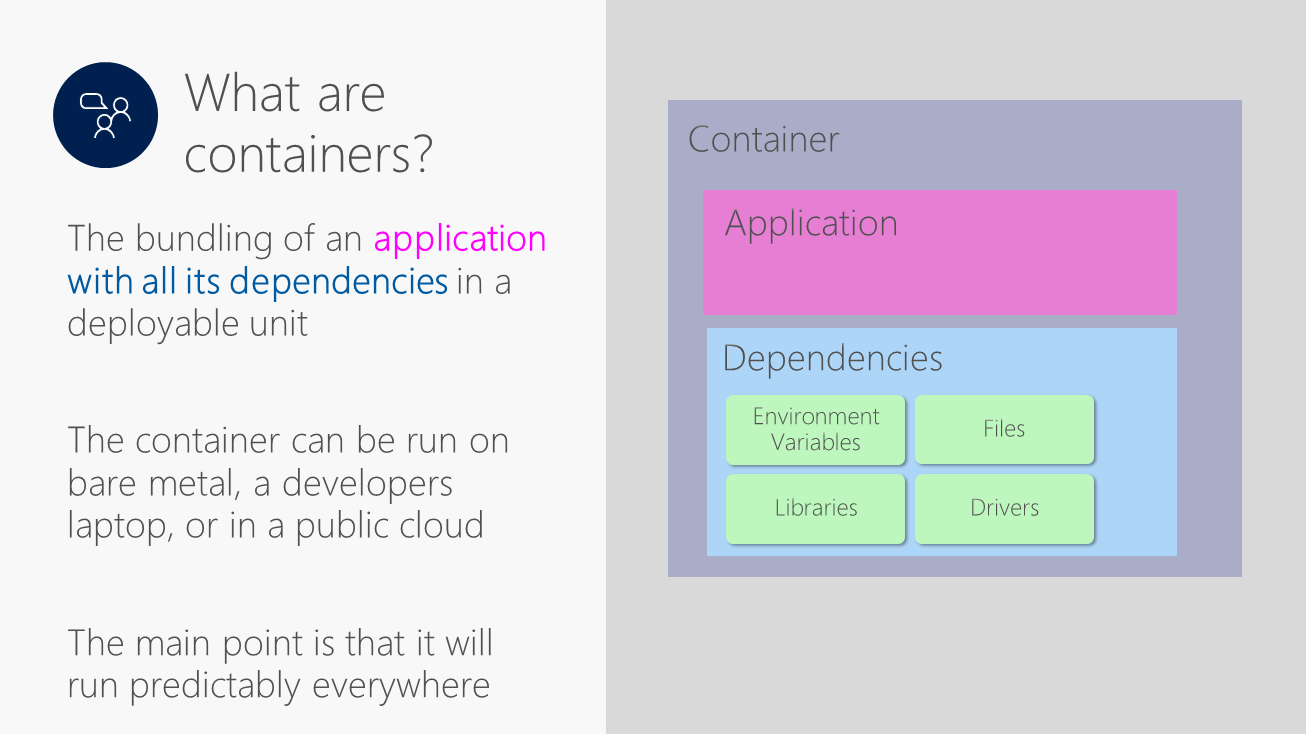 Slide 4: What exactly is a container?

DevOps has been around a long time and essentially speaks to delivering applications to users efficiently and with high quality. High-performing IT operations embrace DevOps, allowing them, in some cases, to deploy thousands of updates per day. It is well documented that frequent and high quality updates of software results in having happy customers and even happy employees. 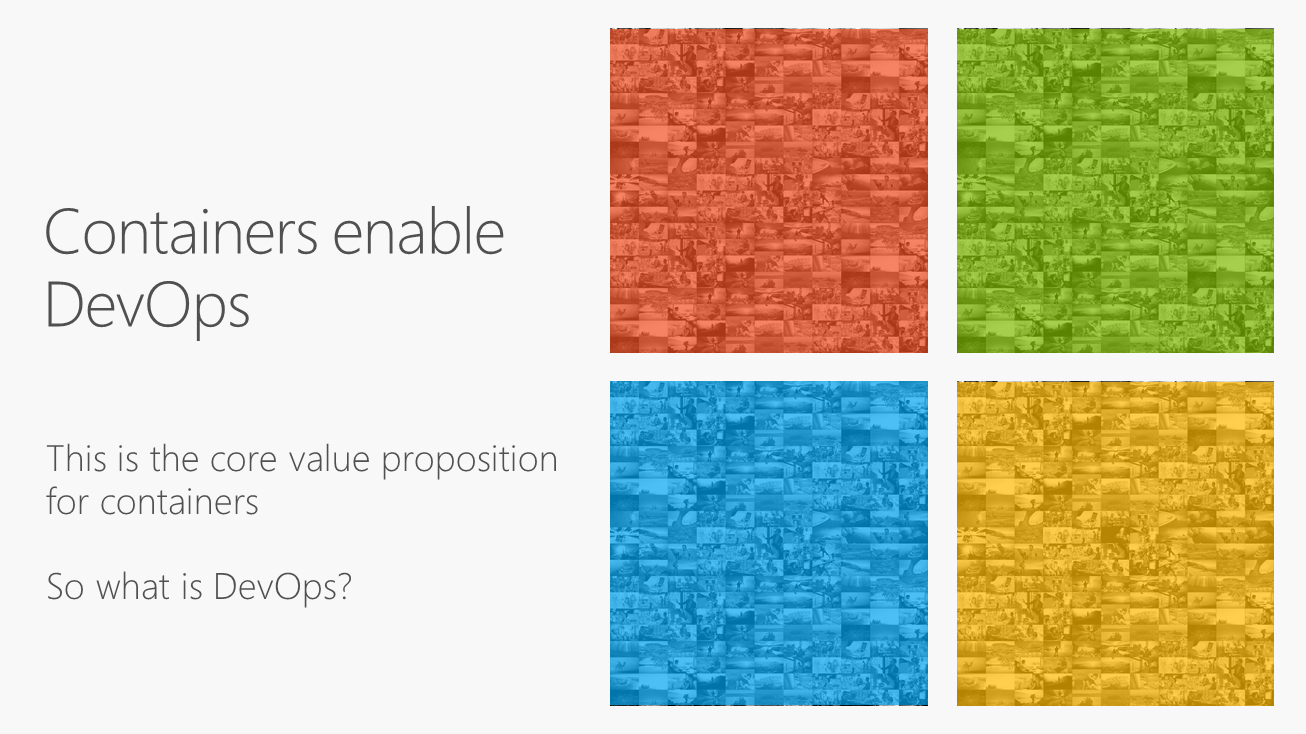 DevOps is all about streamlining the application delivery process, bringing together the worlds of a developers, quality assurance engineers, and IT operations. It’s all about building applications, testing them, and getting them into production quickly, reliably and with high quality. Ultimately this is about responding to customer need and giving customers exactly what they want in a timely fashion.

In this new model of application delivery updates can be provided in real time and during peak application usage without any downtime. This capability is increasingly important in web and mobile scenarios. More broadly it is relevant even for internal LOB applications in enterprises. 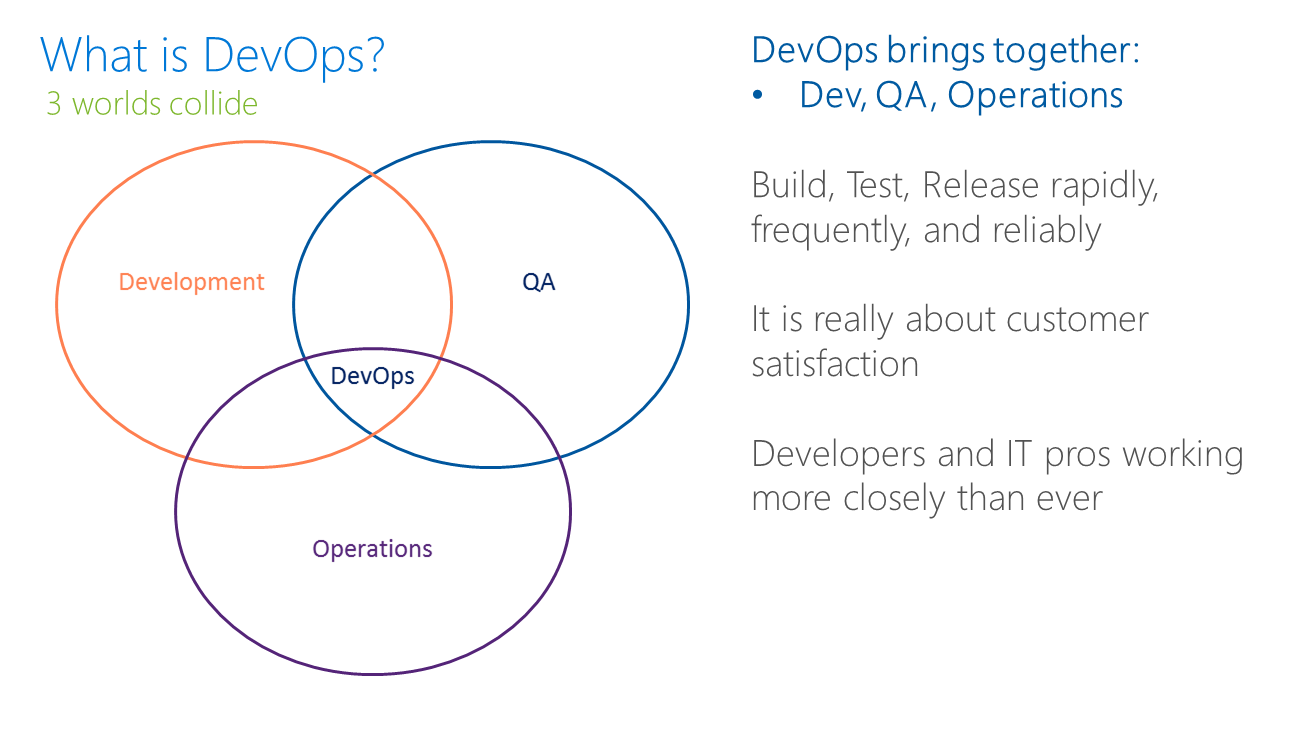 Slide 6: The intersection of development, quality assurance, and IT operations

It is easy to think about scenarios where this might be important. Imagine a company that lets you submit your tax returns electronically. During peak tax season the ability to quickly and easily make updates to the live software is critical because money is on the line for the end user. Also imagine medical scenarios where life-and-death decisions are being made by software.

There are countless examples that point to the single fact that optimized software deployment is essential. 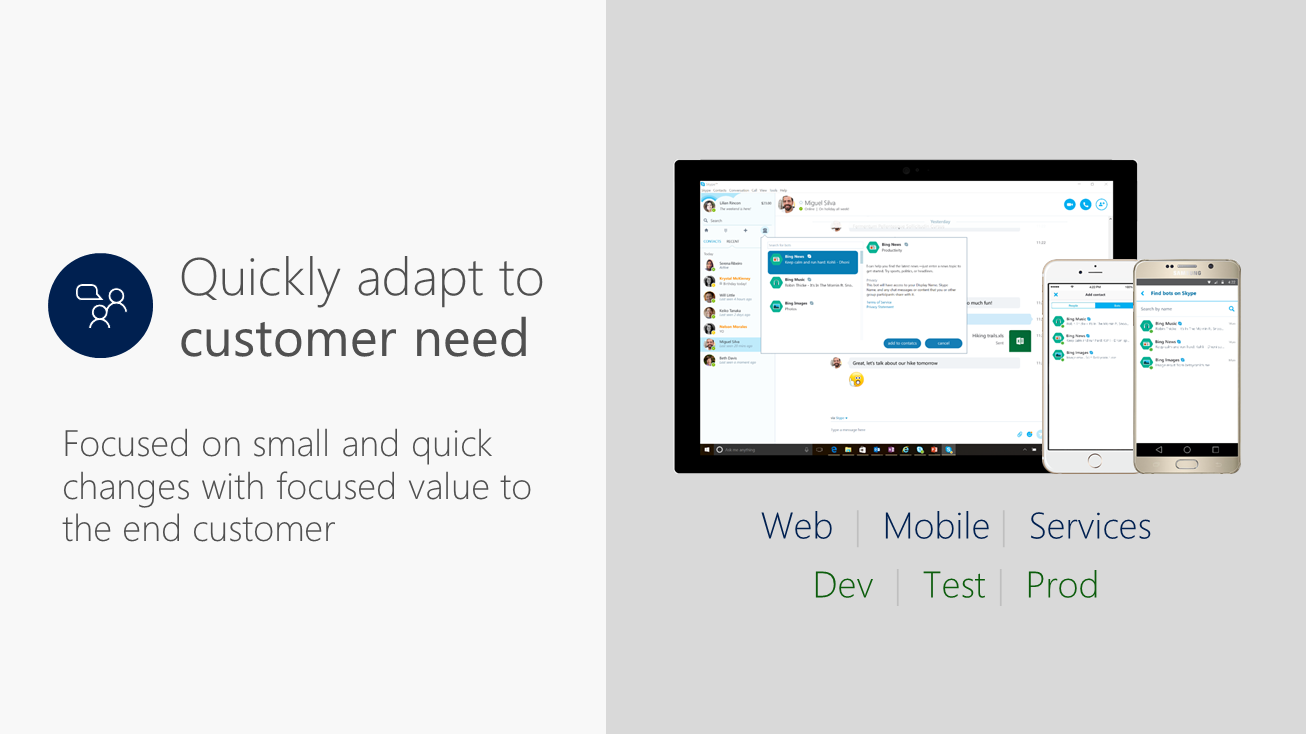 Slide 7: It is about frequent updates

It should come as little surprise by now that containers have dramatically improved the company’s ability to improve their approach to DevOps It allows a developer to include all the important dependencies of the application being developed That means when the developer checks the code in, a series of automated steps take place. 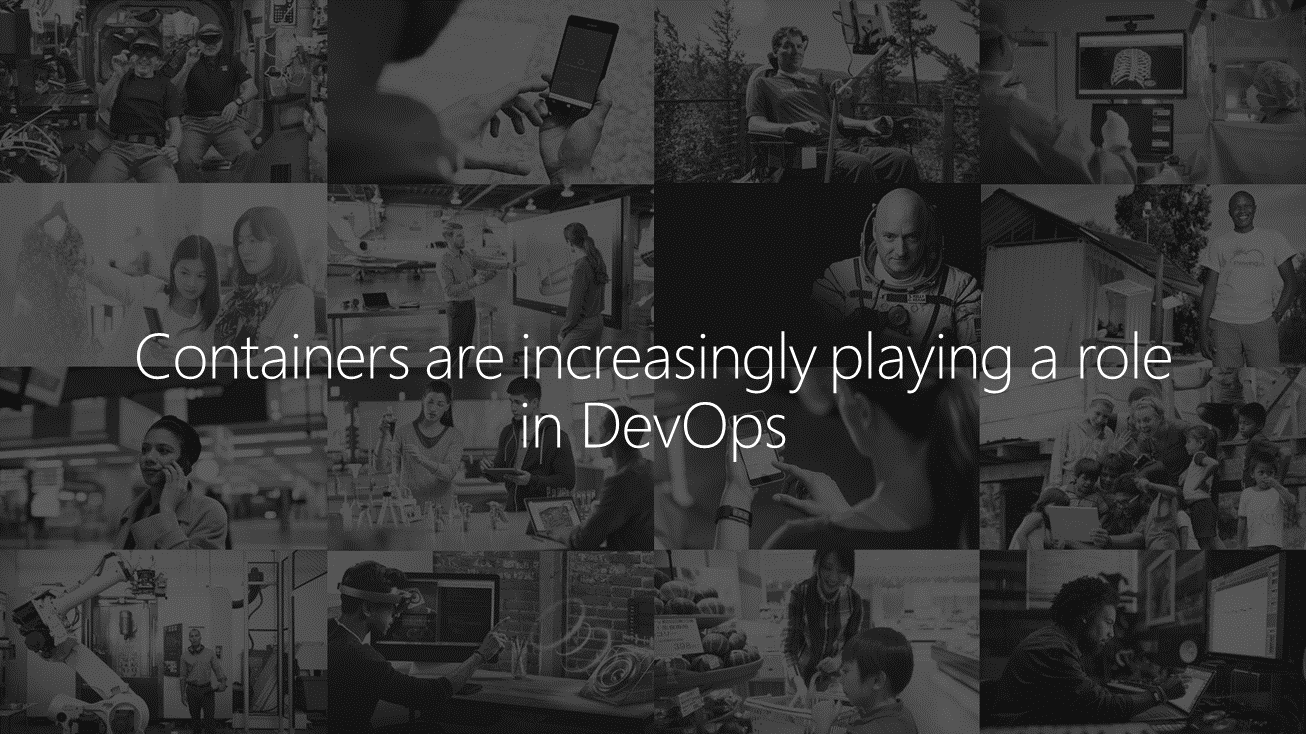 Slide 8: DevOps made better with containers

DevOps pre-dates the world of Docker containers. But with the advent of containerization, DevOps is undergoing a dramatic change, a change that is improving the ability for companies to deliver application updates frequently and with higher quality. 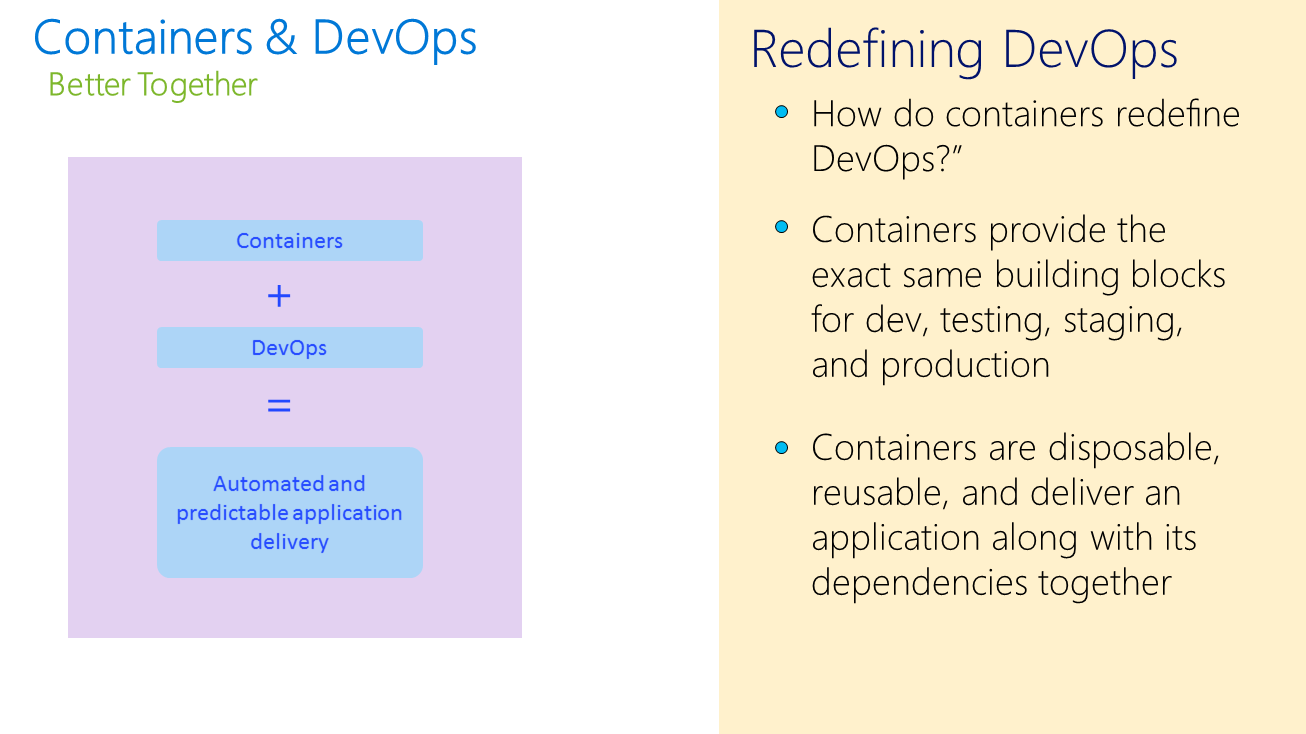 Slide 9: The application behave the same way and development, testing, staging, and production

On the left side

On the right side (containerized version) 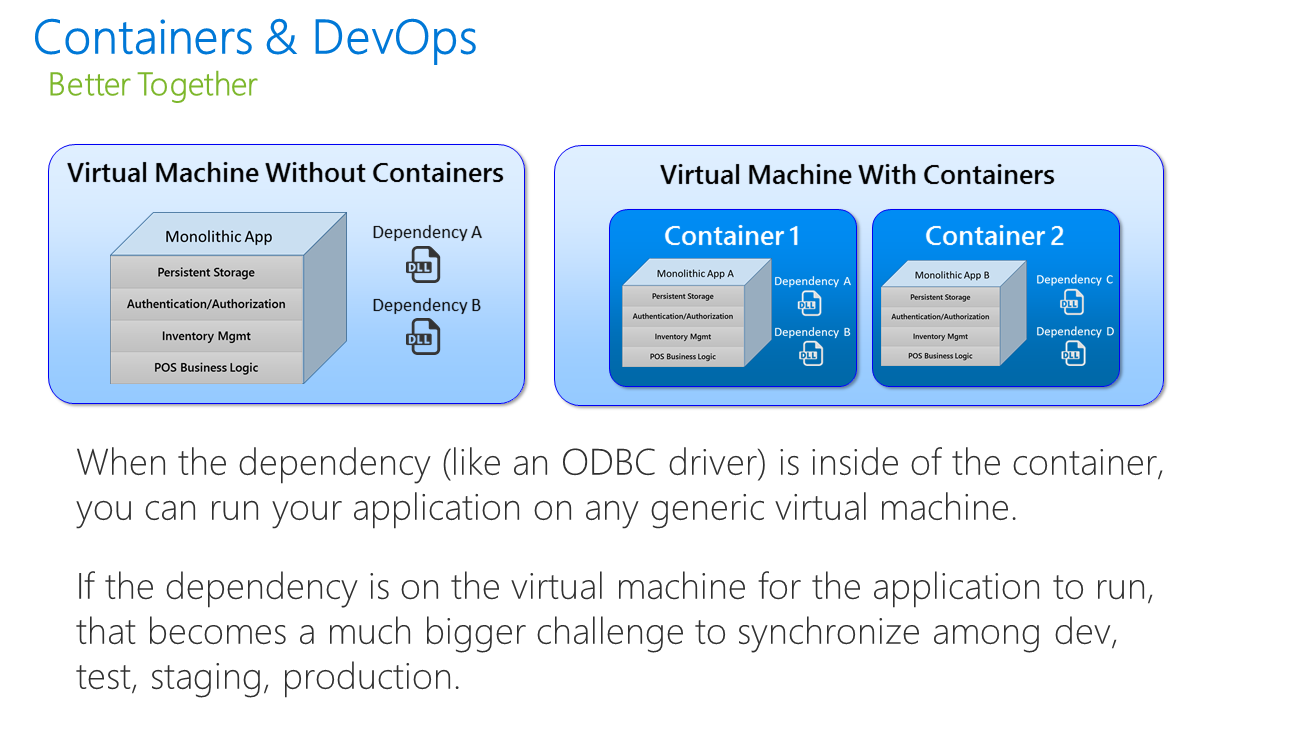 Slide 10: What the virtual machine looks like with and without containers

A fully automated application delivery pipeline is the endgame here. At each step in the process containers play an essential role. The core point is that all the dependencies of an application travel with it through this process. The other advantage here is that if any failures are discovered in production, it is very easy to roll back to a previous version. It’s a simple case of stopping the container in production and running the prior version, which is already sitting there and just needs to be run, taking up less than a second typically. 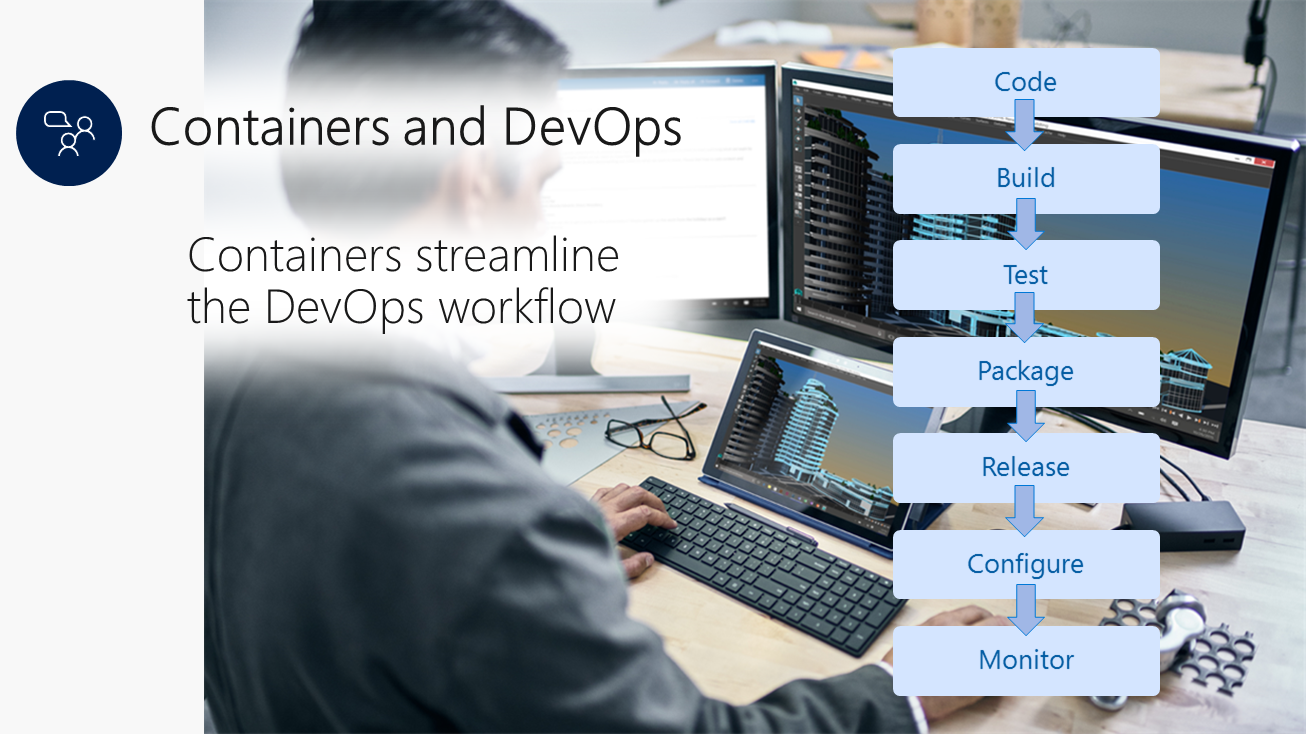 The standard vocabulary in this world include such words as continuous integration, continuous delivery, and continuous deployment, not to mention continuous monitoring The traditional approach to releasing software now means that it is always being delivered, that releases are taking place all the time, in one fluid work stream.

The key takeaway below is that there is a constant flow of application delivery. As changes are made, they are tested an rolled into production as quickly as possible. No longer are their periods of weeks or months before updates are sent to production. 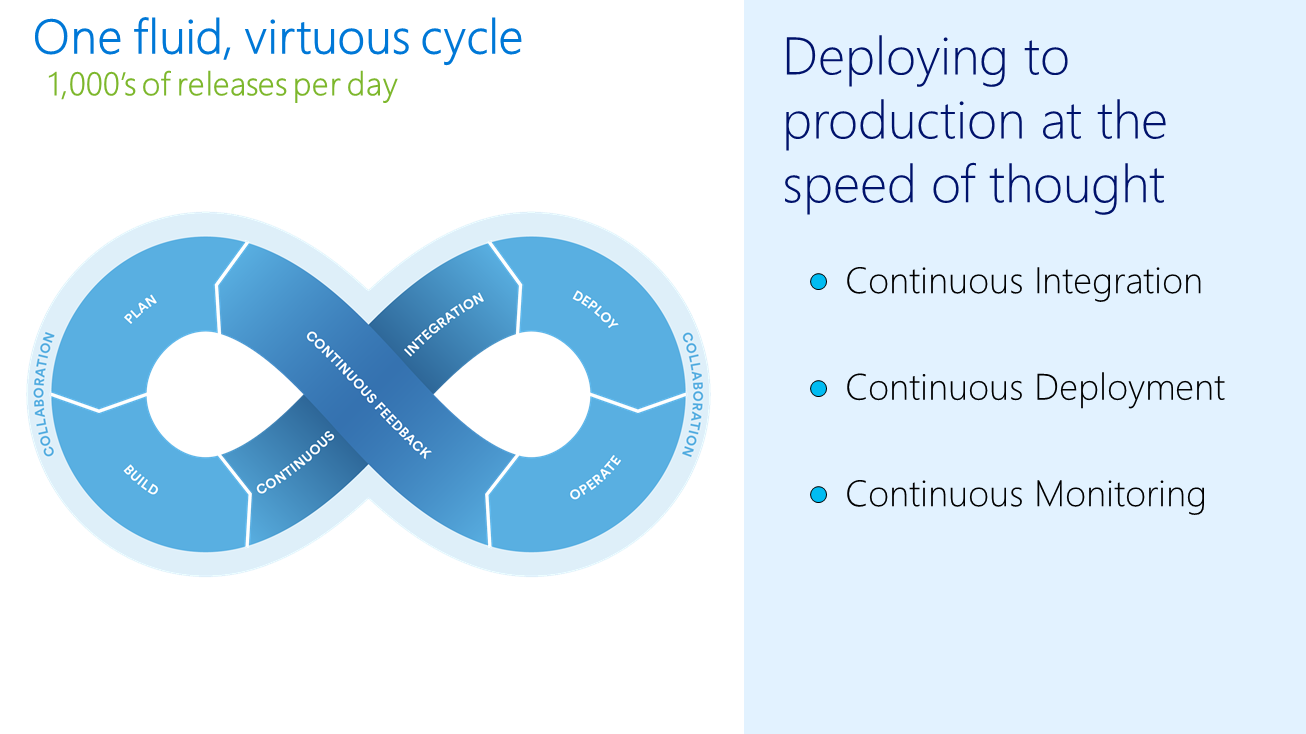 So now we get to the real reason that containerization is important – economics The benefits are many and varied The referenced report in the slide below provides detailed information There is a clear relationship between an optimized application delivery mechanism with customer and employee satisfaction This should come as no surprise.

The ultimate benefit for a business is that it lowers costs and increases revenue. It is easy to measure lower costs through reduction in the cost of supporting IT infrastructure. More difficult to measure is customer acquisition, customer retention, and customer satisfaction. Many of the Fortune 1000 companies now consider themselves software companies.

The ability to monetize data, make predictions and taking actions based on machine learning algorithms, are playing an increasing role in modern business. The competitive advantage of a company is rooted in their application development and delivery capabilities. Adapting quickly to a competitive or business landscape is crucial. 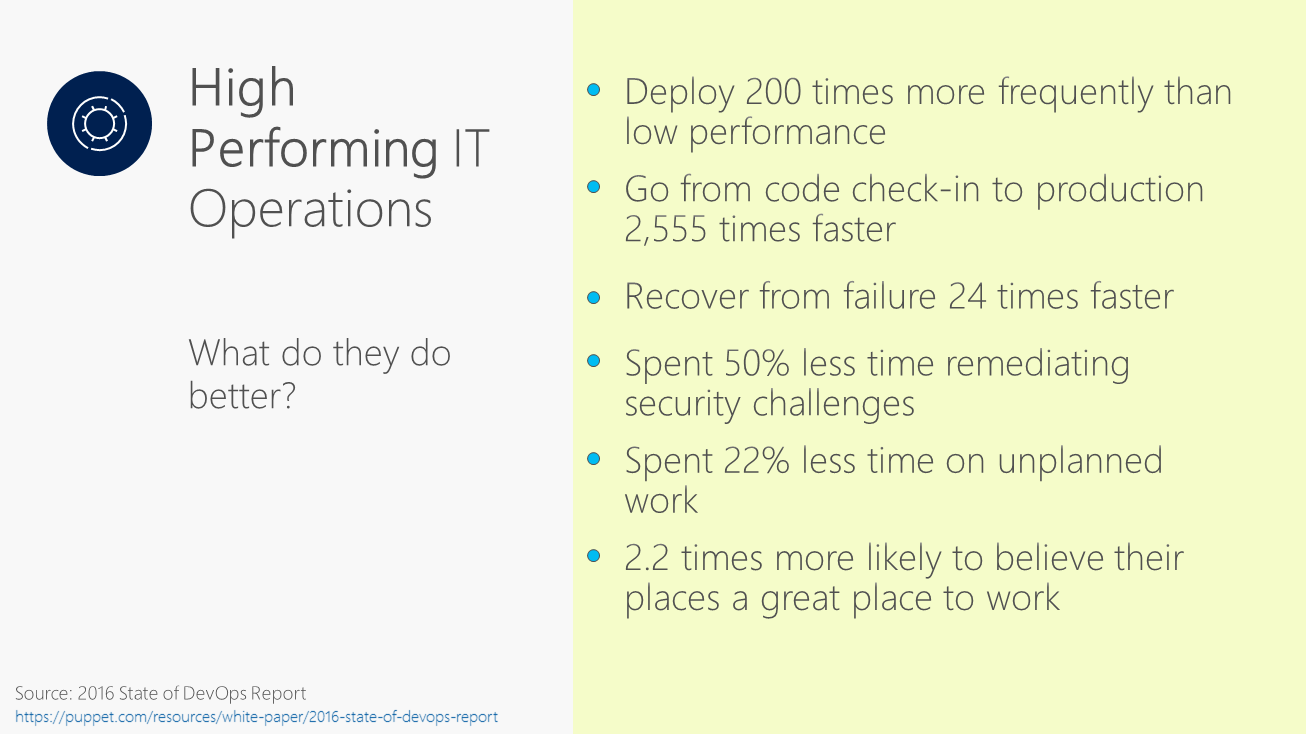 High performing IT operations reduce the amount of unnecessary work, due to failures in the application delivery process. In addition they accrue less technical debt, meaning that software rewrites do not compromise the architectural integrity of applications. Often times, companies spontaneously apply last-minute changes to the software to reduce downtime in production. Scrambling to fix software under pressure often results in architectural decay, also know as technical debt. 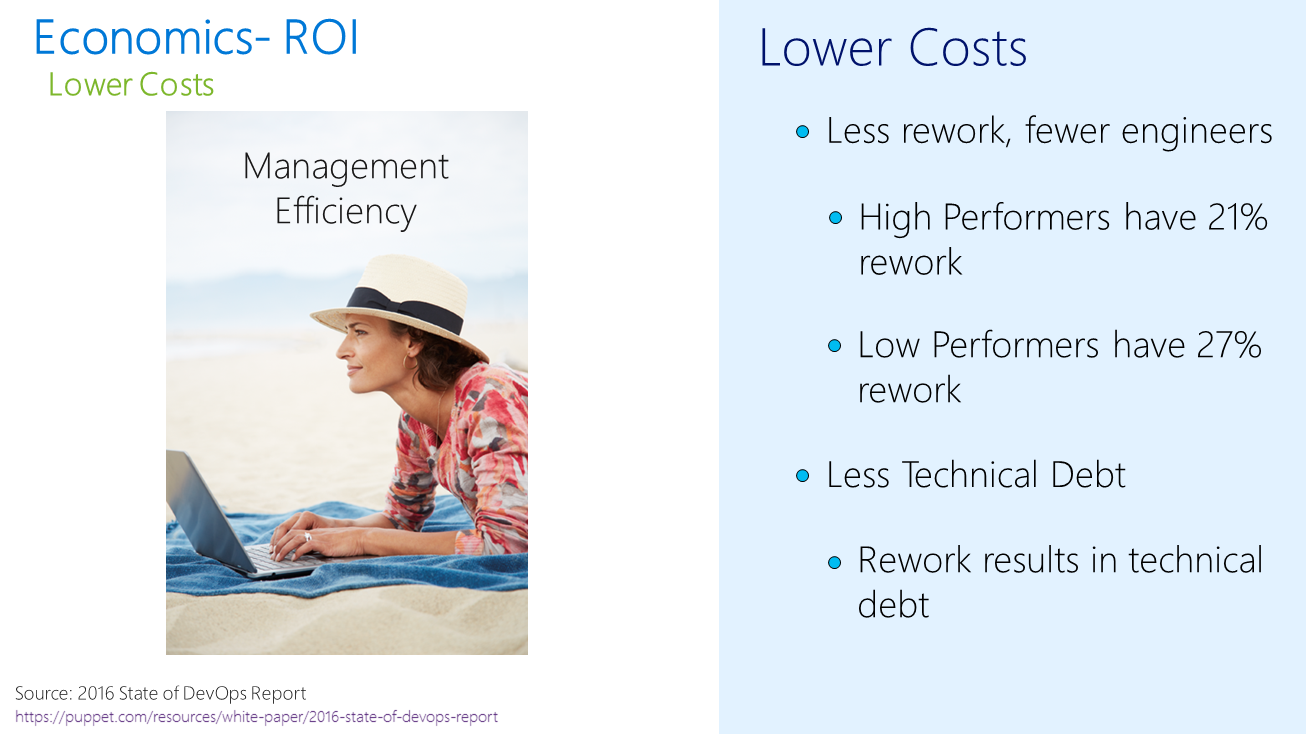 Slide 14: Lowering the cost of IT

Application failure is extremely expensive It could mean that a website is unable to accept orders from customers It could mean a disruption of the supply chain pipeline In worst case scenarios, it can threaten human life, such as in medical care scenarios More abstract is the damage caused to company brand, due to frustrated customers. 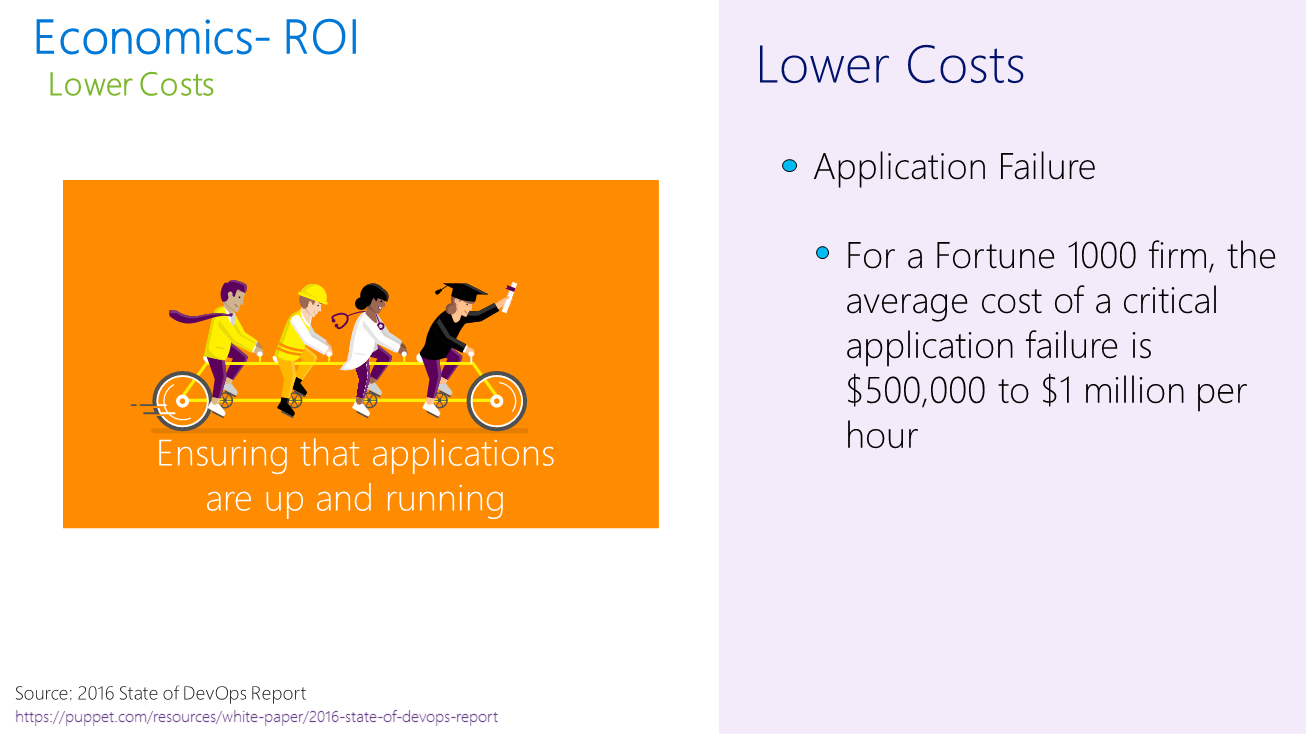 Some organizations run tens of thousands of containers at the same time. When operating at that scale, it is impossible to concern yourself with individual virtual machines and directing containers to run on them. Instead, it is important to look at your computing infrastructure is one giant pool of compute, networking, storage, and memory. That is what a cluster orchestrator enables. 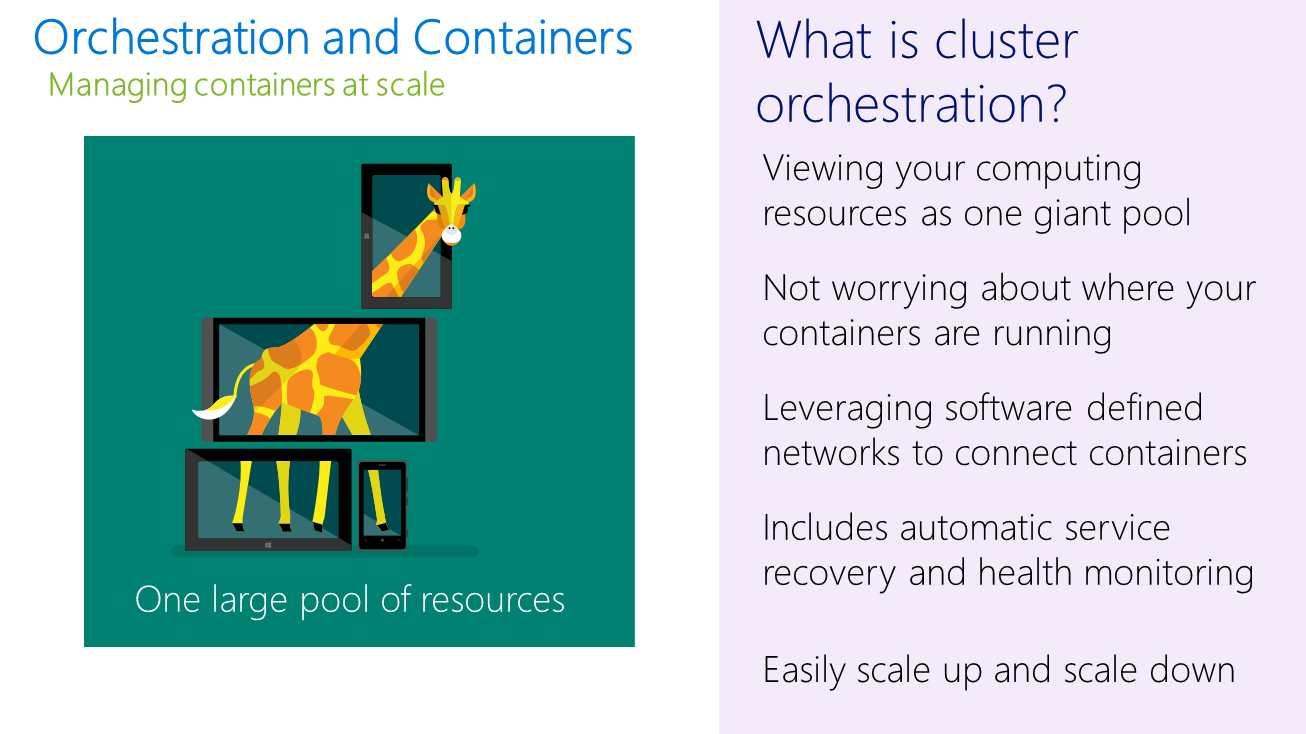 This technology got started at around 2008 There is very significant competition for companies in this space trying to capture mind share The notion of a cluster orchestrator really got started back in 2009, with the introduction of Apache Mesos AWS was quick to respond, but did so with a highly proprietary solution, locking you into their custom API.

Containers along with the associated applications are generally run inside of a cluster. Deploying and running containers on a cluster is the job of a cluster manager or orchestrator. The popular orchestration technologies today for running Docker containers include: (1) Mesos; (2) Docker Swarm; (3) Kubernetes. Of the three, Mesos has been around the longest. Kubernetes and Docker Swarm have only been around three years or less, while Mesos has been around since 2009. They are often described also as cluster managers. They are also described as cluster orchestrators. With varying degrees of completeness these cluster managers or orchestrators also provide the ability to scale, recover from failure, and treat a set of virtual machines as a single pool of compute resources. 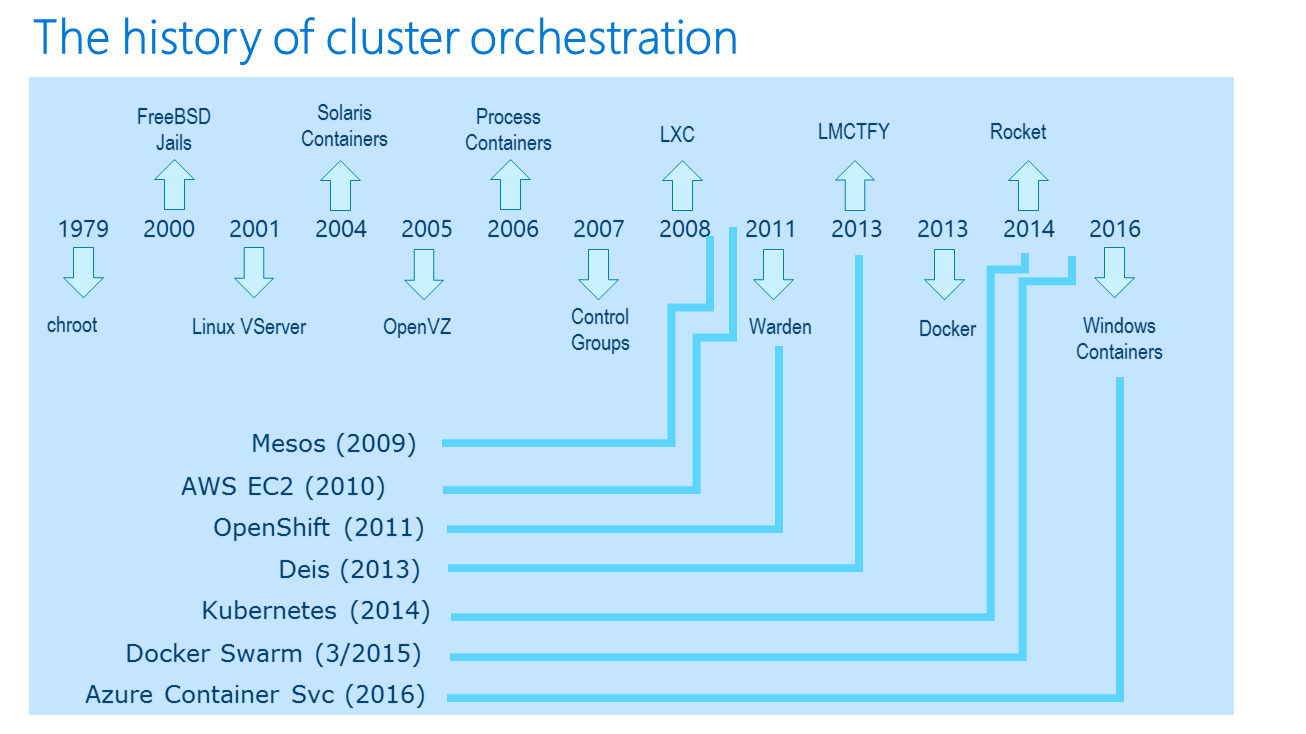 Slide 17: The history of orchestration

You are invited to go read this white paper put out in 2010. The work done at Berkeley inspired two big software companies to take advantage of this form of distributed computing. Both Databricks and Mesosphere were formed based on this work. 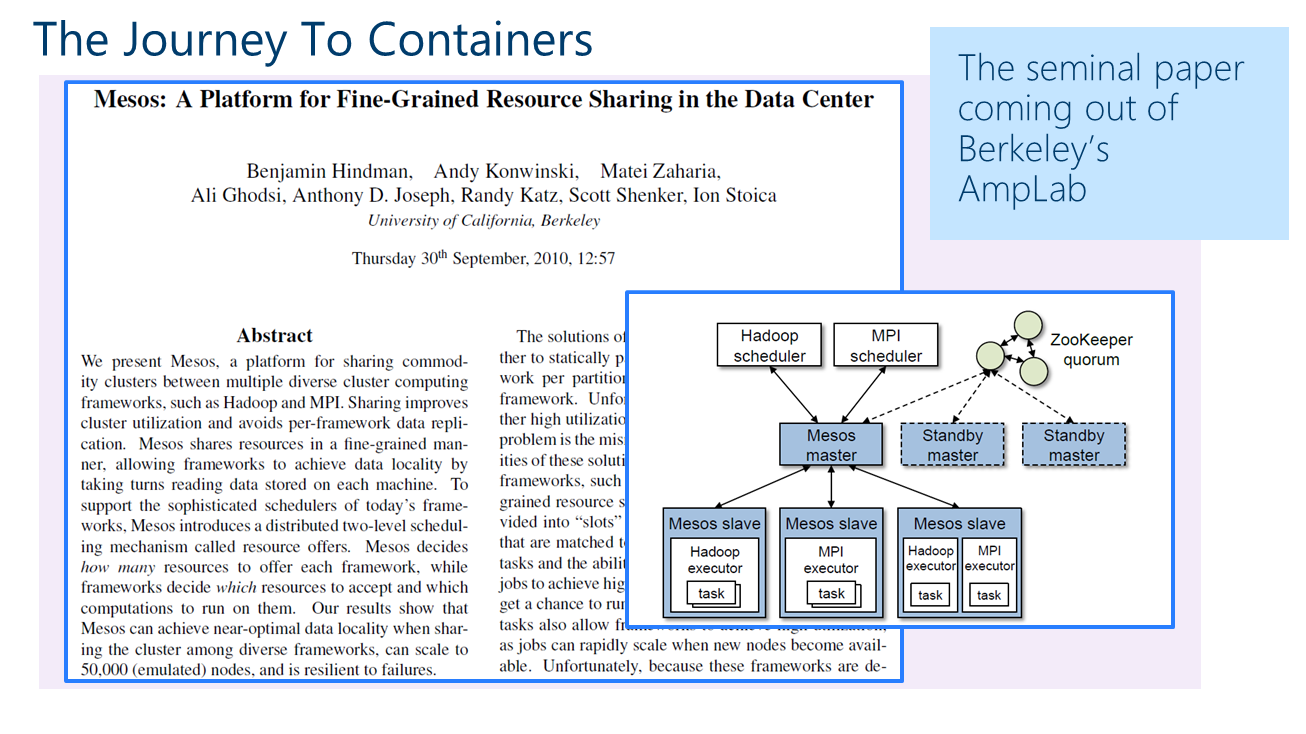 This slide encapsulates the discussions the main points that we addressed in this post. At the end of the day it’s really about getting quality code and applications in your production as frequently and as accurately as possible. Moreover, once these containers make it into production, they are running on an orchestrated cluster that manages the container and its applications lifecycle. 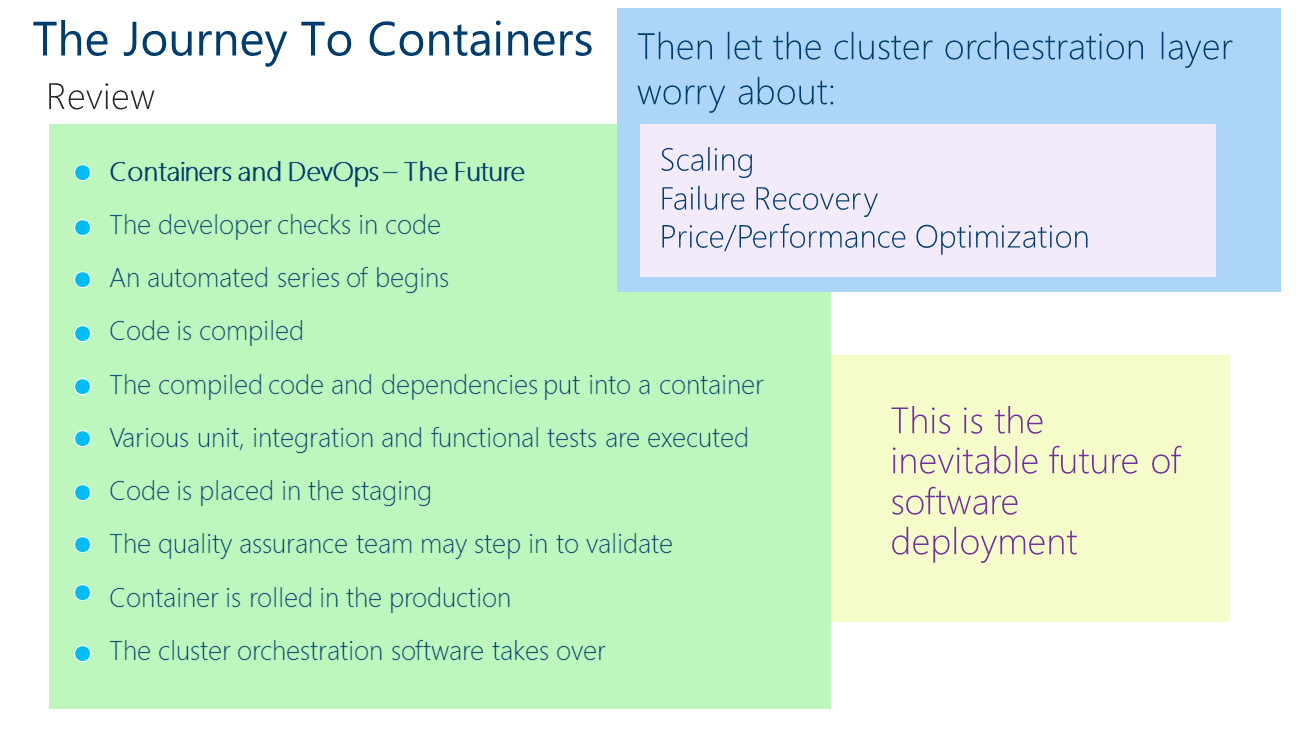