iSCSI target allows your Windows Server to share block storage remotely. iSCSI leverages the Ethernet network and does not require any specialized hardware. iSCSI target is a service available in Windows 2012 R2 and can enabled from Add Roles and Features Wizard.

Target: Targets are created in order to manage the connections between the iSCSI target server and the servers that need to access them. You assign logical unit numbers (LUNs) to a target, and all servers that log on to that target will have access to the LUNs assigned to it.

iSCSI initiator: Microsoft® Internet iSCSI Initiator enables you to connect a host computer that is running Windows® 7 / Windows Server® 2008 R2 or higher to an external iSCSI-based storage array through an Ethernet network adapter. iSCSI initiator service runs on the client and used to make a connection to the iSCSI Target by logging on to a Target server.

For more details you can refer :

This article talks about how to configure the iSCSI service in Windows 2012 R2. 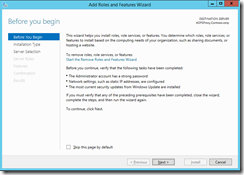 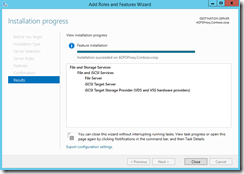 3. Once the iSCSI service is installed you can go ahead create the virtual iSCSI virtual disks and then connect it to the servers you want. Click on New iSCSI virtual Disk:

4. As Windows 2012 R2 allows you to manage other servers, you can select the server where you want to create the iSCSI VHD. 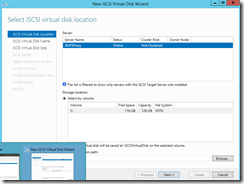 5. Provide a name to the iSCSI virtual disk. As you would notice now it has support has for .vhdx file. 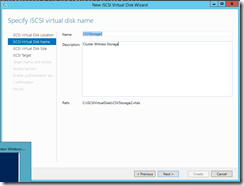 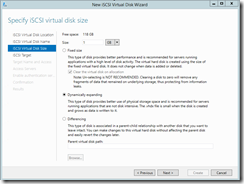 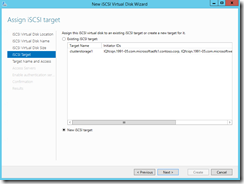 8. Provide a name to the iSCSI target. 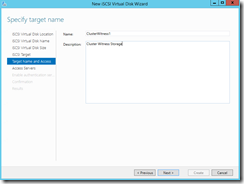 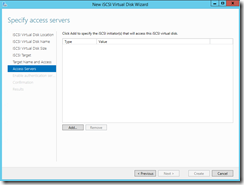 10. Add the iSCSI initiator that will access this iSCSI target. 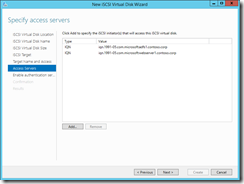 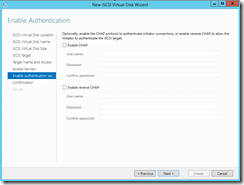 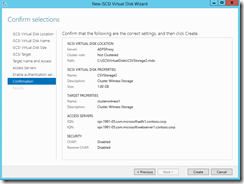 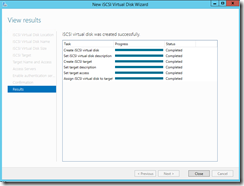 1. Once the iSCSI target is configured, go to the Windows 2012 R2 server where you want to connect to the iSCSI virtual disk. Open the iSCSI intiator from server tools and provide the IP address / hostname for the iSCSI target server. 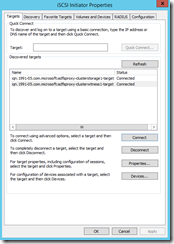 Once the connection is established, the iSCSI virtual disk will be presented to the initiator as a disk. By default, this disk will be offline,. For typical usage, you want to create a volume, format the volume and assign with a drive letter so it can be used just like a local hard disk.