Using a Windows Runtime Component from a Win32 application

As we have seen in this blog multiple times, the Desktop Bridge isn't just a technology to package existing Win32 apps using the Windows 10 deployment model. It's also a way to give you access to Universal Windows Platform APIs, to allow a UWP application to launch a Win32 process, etc.

Thanks to this approach you are able, for example, to use a Windows Runtime Component written in C++ in a UWP application built with XAML / C# or HTML and JavaScript.

However, being the Universal Windows Platform a different development ecosystem than the .NET Framework, you aren't able to mix the two technologies in an easy way. A Windows Runtime Component isn't a simple Class Library, so you can't add a reference to it, let's say, in a WPF or Windows Forms app.

Thanks to the Desktop Bridge and the Windows Application Packaging Project we can do it!

This post takes inspiration from two samples published by Microsoft: 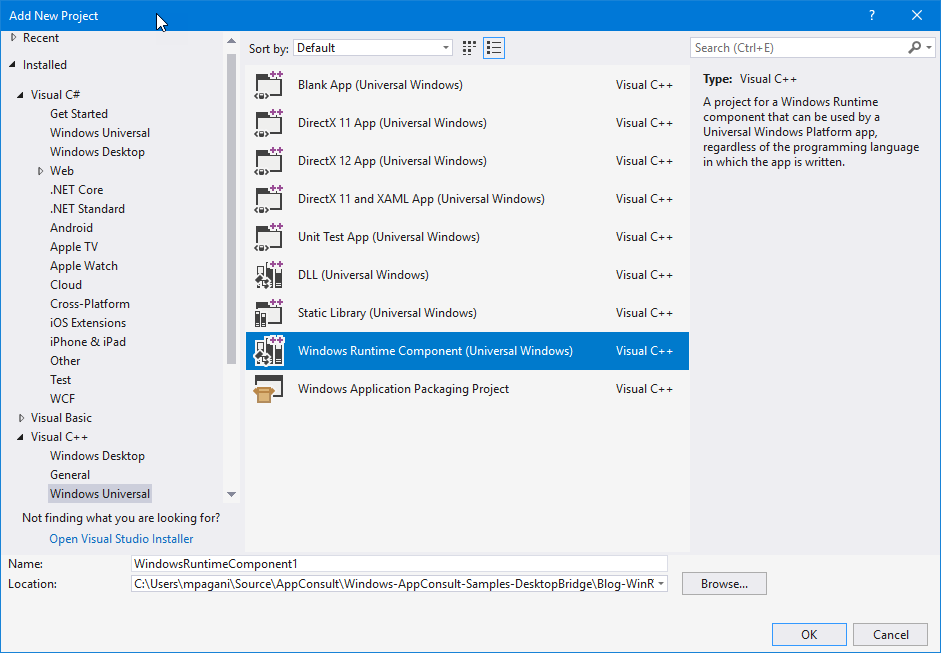 The project will already contain an empty class, called Class1.cpp. Feel free to rename it with something meaningful, like NotificationHelper.cpp. Do the same also for the header file, which describes all the methods exposed by the class. Rename Class1.h to NotificationHelper.h

Make sure that namespace Notifications is set with the same name you have assigned to the project, otherwise you will get a compilation error. This header simply describes two public methods: one is the default constructor, the other one is a method called ShowNotification() which accepts two string parameters as input.

Let's see now the implementation, which must be included in the NotificationHelper.cpp file:

Now let's add to our solution a new WPF application, which template sits under Visual C# -> Windows Desktop -> WPF App (.NET Framework) . Give it a meaningful name (I've called it WinRTComponent.WPF). Then, as first things, let's add a reference to the Windows Runtime component. Right click on the WPF project, choose Add reference and select the C++ project we have previously created. Then expand the References section, expand it, look for the Windows Runtime component, right click on it and choose Properties. Make sure that Copy local is set to False. 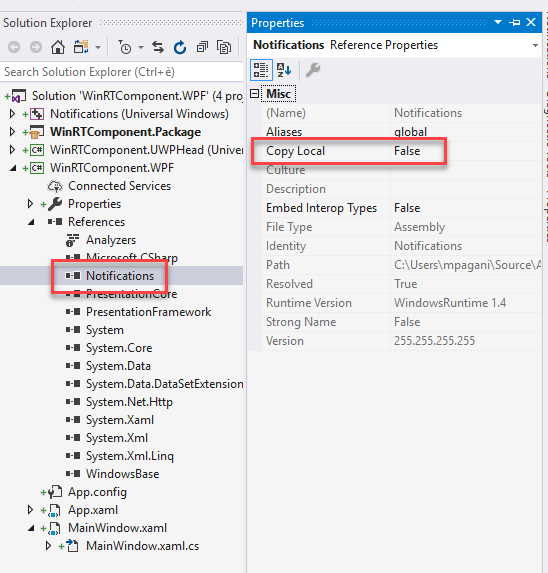 Now let's write some code to use the Windows Runtime component. In the user interface let's just add a Button to trigger the notification. Open the MainWindow.xaml page and change the existing Grid with the following code:

Now move to the code behind class (the MainWindow.xaml.cs file) and add the definition of the OnShowNotification event handler:

We're just using the NotificationHelper class we have previously created in the C++ project to invoke the ShowNotification() method, passing a title and a content.
Let's try to run the WPF application and click on the button. As expected, the operation will fail: 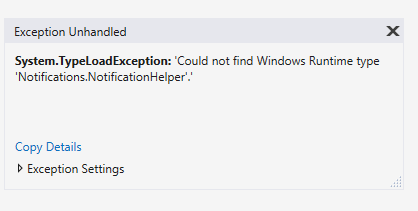 The application isn't running in the context of the Universal Windows Platform and, as such, despite Visual Studio is able to see the Windows Runtime Component and provide IntelliSense, Windows isn't able to reference it in the proper way.

The way to package an existing Win32 application and to leverage the Desktop Bridge is to add a new Windows Application Packaging Project in our solution. We can find it under Visual C# -> Windows Universal.
We need to include inside the package both the Windows Runtime Component and the WPF application, so right click on the Packaging Project, choose Add reference and select both projects: 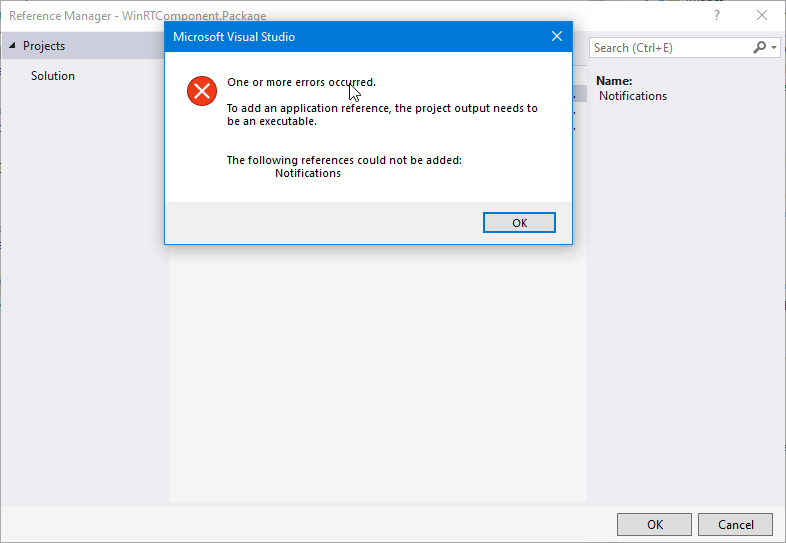 In order to workaround this problem, we need a real application to link to the Packaging Project. We're going to use an empty UWP project. It will be just an empty shell and its purpose it will be only to hold a reference to the WinRT component, so that it can be deployed inside the package in the right way.

Right click on your solution and add a new UWP project. You'll find the template under Visual C# -> Universal Windows -> Blank App (Universal Windows) . Call it as you prefer (I named it WinRTComponent.UWPHead, by following the guidance of the GitHub's sample, then right click on it, choose Add reference and select the Windows Runtime component we have created as first task.

Now return to the Windows Application Packaging Project, right click on it, choose Add reference and, this time, make sure to include the WPF app and the empty UWP app you have just created. Then expand the Applications section and make sure that the WPF app is set as entry point.

Now deploy and run the Windows Application Packaging Project. Click on the button of the WPF app and... surprise!

Since now the application is running in the context of the Universal Windows Platform, we are able to use the ShowNotification() method exposed by our Windows Runtime component.

What if I want to use a C# Windows Runtime Component?

This is the code we add to the main class included in the project:

It's the same code you've seen before to display a toast notification, but this time it's written in C#.
The first difference is that, unlike for a C++ WinRT component, you can't direclty reference it from a .NET project in Visual Studio. If you try to reference it from your WPF project, you'll get an error like the one below: 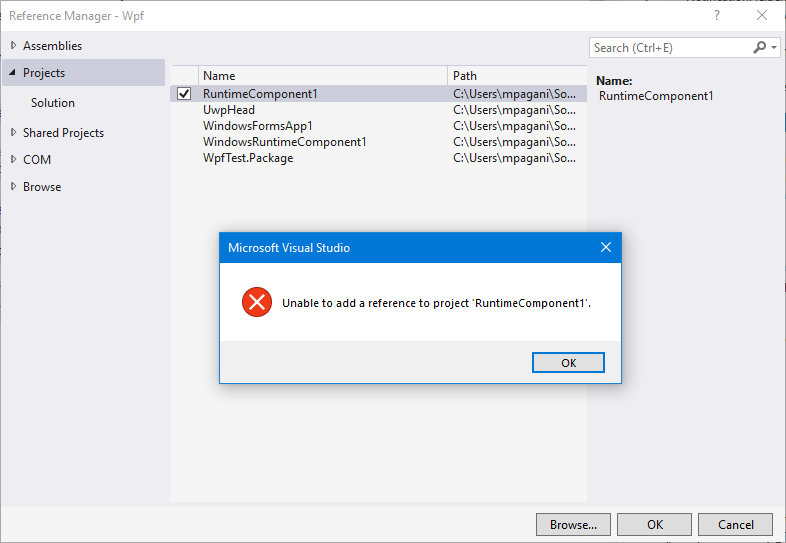 Look for an ItemGroup section with a sequence of Reference items and add, as last item, a reference to the .winmd file generated by the Windows Runtime Component:

Another important change to do is to define a specific compilation architecture. .NET apps, in fact, can be compiled for the Any CPU architecture, while Universal Windows Platform apps and components no. The reason is that the Universal Windows Platform uses .NET Native to directly create native code from the source and, as such, it can't be cross compiled for multiple architectures.
Right click on the WPF project, choose Properties and move to the Build section. Make sure that, in the Configuration dropdown the All configurations option is selected and change Platform target to x86 or x64, based on your preference.

The last step is to make sure that your WPF application is being compiled with .NET Framework 4.7, which contains specific fixes and improvements for this scenario. You may hit errors and warnings regarding a mismatch with the System.Runtime library if you try to compile the WPF project using a lower .NET version.

That's all! Now make sure to add to the UWP Head project a reference to the new C# Windows Runtime component, then deploy the Windows Application Packaging Project.
If you did everything properly, you will see again the notification popping out when you press the button. This time, however, it has been generated by a Windows Runtime Component written in C# and not C++.

Wait, why do I have two applications in my Start menu?

If you open the Start menu after you have deployed the packaging project, you will notice two applications in the list:

This is happening for the same reason we have seen in the post about packaging a UWP app + Win32 app. By default, every project which outputs an application is deployed by Visual Studio. If you want to change this behavior and deploy only the relevant one (in our our case, the Windows Application Packaging Project), choose Build -> Configuration Manager from the Visual Studio menu and uncheck the Deploy column for the UWP project: 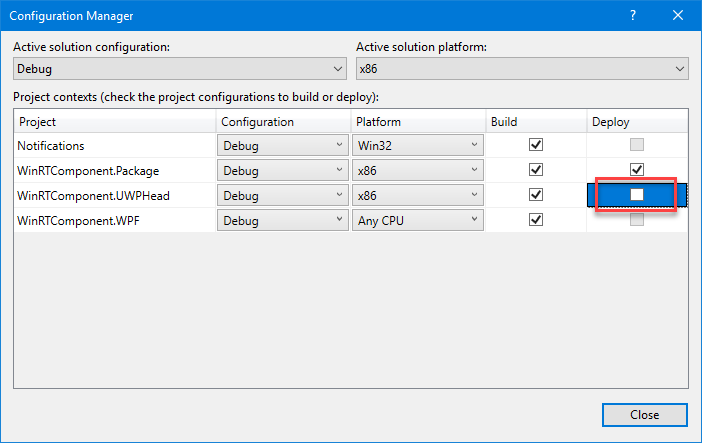 As stated in the other post, this affects only the debugging phase. When you create the package, automatically Windows will deploy only the project you have set as entry point in the manifest file.

In this post we have learned which is the right way to leverage a Windows Runtime component from a .NET application, thanks to the Desktop Bridge and the Windows Application Packaging Project. We have explored both the steps to add a C++ component and a C# component.
You can find the sample project used in this post on GitHub at https://github.com/Microsoft/Windows-AppConsult-Samples-DesktopBridge/tree/master/Blog-WinRTComponent/WinRTComponent.