Disclaimer: Windows Server 2016 is still in a Technical Preview state – the information contained in this post may become inaccurate in the future as the product continues to evolve. More specifically, there are still issues being ironed out in other parts of Privileged Access Management in Technical Preview 4 for multi-forest deployments. Watch for more updates as we get closer to general availability!

Hello, Ryan Ries here again with some juicy new Active Directory hotness. Windows Server 2016 is right around the corner, and it’s bringing a ton of new features and improvements with it. Today we’re going to talk about one of the new things you’ll be seeing in Active Directory, which you might see referred to as “expiring links,” or what I like to call “temporary group memberships.”

One of the challenges that every security-conscious Active Directory administrator has faced is how to deal with contractors, vendors, temporary employees and anyone else who needs temporary access to resources within your Active Directory environment. Let’s pretend that your Information Security team wants to perform an automated vulnerability scan of all the devices on your network, and to do this, they will need a service account with Domain Administrator privileges for 5 business days. Because you are a wise AD administrator, you don’t like the idea of this service account that will be authenticating against every device on the network having Domain Administrator privileges, but the CTO of the company says that you have to give the InfoSec team what they want.

(Trust me, this stuff really happens. )

So you strike a compromise, claiming that you will grant this service account temporary membership in the Domain Admins group for 5 days while the InfoSec team conducts their vulnerability scan. Now you could just manually remove the service account from the group after 5 days, but you are a busy admin and you know you’re going to forget to do that. You could also set up a scheduled task to run after 5 days that runs a script that removes the service account from the Domain Admins group, but let’s explore a couple of more interesting options.

Creating dynamic objects is not as simple as just right-clicking in AD Users & Computer and selecting “New > Dynamic Object,” but it’s still pretty easy if you use ldifde.exe and a simple text file. Below is an example: 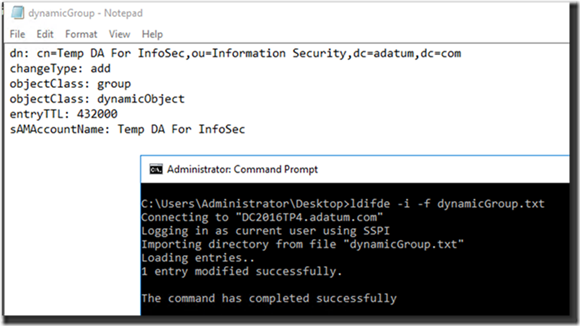 In the text file, just supply the distinguished name of the security group you want to create, and make sure it has both the group objectClass and the dynamicObject objectClass. I set the entryTTL to 432000 in the screen shot above, which is 5 days in seconds. Import the object into AD using the following command:
ldifde -i -f dynamicGroup.txt

Now if you go look at the newly-created group in AD Users & Computers, you’ll see that it has an entryTTL attribute that is steadily counting down to 0: 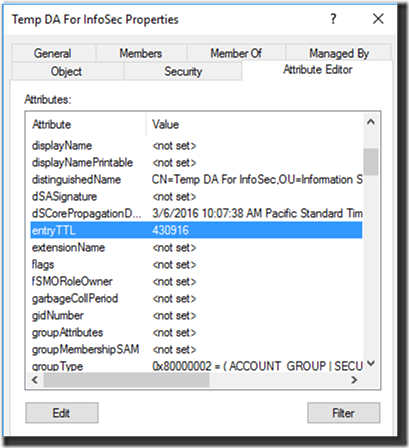 You can create all sorts of objects as Dynamic Objects by the way, not just groups. But enough about that. We came here to see how the situation has improved in Windows Server 2016. I think you’ll like it better than the somewhat convoluted Dynamic Objects solution I just described.

For our next trick, we’ll need to enable the Privileged Access Management Feature in our Windows Server 2016 forest. Another example of an optional feature is the AD Recycle Bin. Keep in mind that just like the AD Recycle Bin, once you enable the Privileged Access Management feature in your forest, you can’t turn it off. This feature also requires a Windows Server 2016 or “Windows Threshold” forest functional level:

Now isn’t that a little easier and more straightforward? Our InfoSec service account now has temporary membership in the Domain Admins group for 5 days. And if you want to view the time remaining in a temporary group membership in real time:
Get-ADGroup 'Domain Admins' -Property member -ShowMemberTimeToLive

Figure 4: Viewing the time-to-live on a temporary group membership.

So that’s cool, but in addition to convenience, there is a real security benefit to this feature that we’ve never had before. I’d be remiss not to mention that with the new Privileged Access Management feature, when you add a temporary group membership like this, the domain controller will actually constrain the Kerberos TGT lifetime to the shortest TTL that the user currently has. What that means is that if a user account only has 5 minutes left in its Domain Admins membership when it logs on, the domain controller will give that account a TGT that’s only good for 5 more minutes before it has to be renewed, and when it is renewed, the PAC (privilege attribute certificate) will no longer contain that group membership! You can see this in action using klist.exe:

Figure 5: My Kerberos ticket is only good for about 8 minutes because of my soon-to-expire group membership.

Lastly, it’s worth noting that this is just one small aspect of the upcoming Privileged Access Management feature in Windows Server 2016. There’s much more to it, like shadow security principals, bastion forests, new integrations with Microsoft Identity Manager, and more. Read more about what’s new in Windows Server 2016 here.

Updated 3/21/16 with additional text in Disclaimer – “ Disclaimer: Server 2016 is still in a Technical Preview state – the information contained in this post may become inaccurate in the future as the product continues to evolve. More specifically, there are still issues being ironed out in other parts of Privileged Access Management in Technical Preview 4 for multi-forest deployments. Watch for more updates as we get closer to general availability!”